The 2018 changes in Armenia did not produce any revolutionary discourse concerning the Karabakh conflict. In Yerevan as in Baku, political elites do not seem able to imagine how to resolve this conflict. I call Diaspora Armenians and Azerbaijanis living abroad to make a bold initiative and start a new dialogue, may be they could move a process that is central in determining the future of their homelands, yet remains paralyzed for nearly two decades.

It was 20 years ago, in June 1999, when I went to Baku with a group of journalists from Armenia, Karabakh, and Georgia. It was part of a project I had initiated in 1997 where I wanted to offer journalists in the South Caucasus a chance to see “to the other side” of the conflict line, to meet and exchange with colleagues and politicians of their neighbouring countries. Weren’t they members of the same Soviet Union, I thought? By knowing the concerns, fears and hopes of the other, journalists could propose a more nuanced reporting, and therefore influence the public opinion towards mutual understanding and eventually contributed to conflict resolution.

Our visit to Baku was the result of efforts of several years. The project of dialogue between journalists started in early 1997 with a meeting in the Georgian capital Tbilisi, where I announced to participants that next meetings will take place in Armenia and Azerbaijan. As I was announcing the bold programme, I was conscious how difficult, if not impossible, my suggestions were. But participating journalists accepted the challenge. In October 1997 we organized a meeting in Yerevan, where among others five journalists from Azerbaijan took part. This was a great honour for me: As a Diaspora Armenian I had succeeded to inspire confidence and convince Azerbaijani colleagues to take the risk and travel to Armenia. They were not risking anything in Armenia itself, but risked to be accused of having “sold their country” upon their return.

Yet, going to Baku was another story. Back then, as now, citizens of Armenia as well as ethnic Armenians could simply not go to Azerbaijan. I tried to have indirect contact with the leaders of Azerbaijan to receive security guarantees before such a trip. After a year and a half of attempts through five different channels, I could establish indirect contact with Presidential Advisor Vafa Guluzade, who himself talked about the visit of journalists to Azerbaijani leader Heydar Aliyev. This permitted us to go to Baku and have our workshop dedicated to professional challenges of post-Soviet journalism. Later, our team of mixed journalists had meetings with Azerbaijani leaders: discussions with Vafa Guluzade – who was fluent in Arabic - were near daily, and later meetings with the Foreign Minister Tofik Zulfugarov, or opposition leaders such as Isa Gambar, Zardusht Alizade, and many others.

The height of the trip was a press conference given by Heidar Aliyev at the presidential palace. The aging politician appreciated our efforts for dialogue: “The creation of mutual trust is of utmost importance. In this context, the initiative of the journalists is worthy of support. I think that journalists can do a lot. A few years back, such visits were difficult to imagine – that a group of Armenians could come to Baku – or vice versa. You journalists, through such exchanges, serve our strategic aim. I consider this a ring in a chain which will lead to peace in the Transcuacasus.”

Heidar Aliyev also had a clear formula for conflict resolution, which was “the status of self-government, which can be the highest status that exists in international practice.” 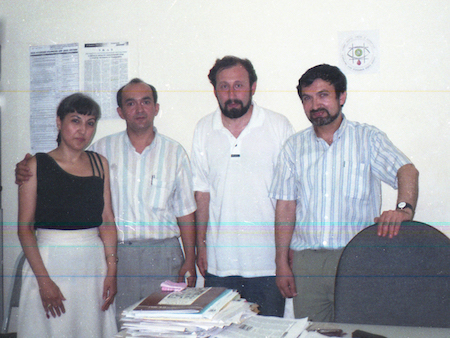 Only a few months later I understood how we served a “strategic aim”, when I saw Presidents Heidar Aliyev and Robert Kocharyan emerging from a villa in Versoix, a suburb of Geneva. Aliyev-Kocharyan had agreed to seriously try to give the Karabakh conflict a diplomatic solution, and later that summer they would start their marathon of meetings that would lead to the Key West meeting in 2001, and finally fail. Aliyev wanted us to prepare his own public opinion to coming negotiations. He had understood that peace-making was not possible with the isolated efforts of presidents and their foreign ministers: he needed channels of communication with the public opinions, both Armenian and Azerbaijani, without which peace is not possible. Eventually, the Aliyev-Kocharyan intensive efforts did not produce any results. After 20 years now, where do we stand with Armenian-Azerbaijani dialogue?

A New Approach is Needed

Today, the Armenian-Azerbaijani dialogue is not only frozen, but we have lost precious two decades of stability during which the conflict could have been addressed diplomatically. Since the coming of Ilham Aliyev – the son of Heidar Aliyev – to power in Baku in 2003, the official Azerbaijani discourse became more aggressive, threatening and maximalist. Ilham Aliyev wrongly thought that the incoming oil money was to strengthen Azerbaijan enabling it to impose its own will on the Armenians on such a complex issue. The only result was to freeze the process; Azerbaijan missed an important window of opportunity to solve the conflict when it was at the height of its power.

Precious time was lost: there is a new Azeri generation emerging that do not know Armenians anymore, and are fed on official propaganda that dehumanizes the Armenian. Gone are those days when Azeris still remembered their former Armenian neighbours with nostalgia. In fact, during my visit to Baku in 1999, the great majority of Azeris I met had positive memories about their former Armenian neighbours, work colleagues and friends. “When will all this end?” many asked. The young Azeri generation do not have the same humane experience. The only Armenians they “know” is propaganda images that have no place in the real world. As a result, any dialogue today is much more difficult than 20 years back.

Nikol Pashinyan after coming to power promised to break the deadlock by democratizing the negotiations process. He said that there was no solution without the participation of both Armenian and Azerbaijani public opinion. But soon Pashinyan’s declarations became increasingly nationalistic, even surpassing the positions of Serzh Sargsyan, talking against any “territorial concessions”, and for the “unification between Karabakh and Armenia.” Pashinyan’s position on Karabakh is not revolutionary, but confused and confusing: as if he makes one type of announcement when he talks to the international community, and a different one when he talks to his domestic constituency or when he goes to Karabakh itself.

Dialogue Between the Diasporas

How could we break this deadlock? First, let us agree that since 1994 when the cease-fire was signed around Karabakh, the political leaders of Armenia and Azerbaijan had 25 years to find a solution, and they failed. It is difficult to imagine those political elites that feel comfortable with this conflict to change the current status quo. On the other hand, Armenian and Azerbaijani people have gone through radical transformation, have become more sophisticated and experienced with the ways of the world. Nationalistic propaganda might still convince many, but there are those who are not satisfied with it anymore. Thousands of Armenians and Azerbaijanis left the Caucasus, and today they live in different countries, including in democratic societies where division of powers and rule of law does exist. Many among them know that militaristic nationalism is not compatible not only with peaceful conflict resolution, but also with democracy and development back home.

If we go back to the offer made by Heidar Aliyev in 1999, to give the highest form of autonomy to Karabakh Armenians, we all know today that Azerbaijan is not able to do it, simply because ruling elite in Azerbaijan does not tolerate even basic freedoms – such as freedom of expression – of its own, ethnic Azeri people. When there is no democracy in Azerbaijan, when human rights are not respected, when Azeri scholars, lawyers and journalists are thrown in jails in their thousands, or choose the road to exile, Azerbaijan cannot propose a peaceful solution to Karabakh conflict.

The problem is not limited to the political elites: as long as intelligentsia subscribes to the nationalistic and militaristic propaganda, or as long as the intelligentsia is silent when it comes to the difficult ethno-territorial conflict, then it will also remain a prisoner of the autocracy and fail to progress on the road of human rights and rule of law.

The 25 years since the cease-fire was not only a failure of the presidents and foreign ministers of Armenia and Azerbaijan. It was also a failure for their intelligentsia: they failed to develop a radical, anti-war discourse. It is time they assume this responsibility.

There are thousands of Azerbaijanis who received higher education in Western universities, including in history, political science, law, and so on. Dozens of Azerbaijani intellectuals including journalists, lawyers, and writers are today in exile after being arrested and imprisoned in their homeland. They are the new Azeri diaspora. Do they realize that nationalism, war, corruption and human rights violations are linked?

For the political elite in Baku, the Armenian Diaspora is a target: they are described as being “extremist”, “nationalist” and portrayed as the “enemy”.  They are forbidden from travelling to Azerbaijan – otherwise they risk arrest and deportation. This image of “nationalist Armenian Diaspora” is also popular among international media and scholars. Let me be clear: I do not know any Diaspora Armenian who is indifferent to the fate of the people of Armenia and Karabakh. But this does not mean that Diaspora Armenians wishing ill to the people of Azerbaijan.  My own career described above witnesses how reality contradicts official propaganda: I spent years of my life to promote dialogue, understanding and peace for Armenia AND for Azerbaijan. I am not the only one: I have many Diaspora Armenian colleagues who have the experience in working in human rights and conflict resolution from the Middle East to Africa, from the Balkans to Central Asia.

In the last 25 years, since Hrant Dink and his friends launched Agos in 1996, Armenian and Turkish intellectuals have made tremendous progress in dialogue. It showed that mutual understanding can only take place based on honesty and truth, however painful that truth could be. This example could serve as a model. It is time for Armenian and Azerbaijani intellectuals living abroad to assume their responsibilities, to develop another vision and discourse and break the cycle of propaganda and the threatening danger of another war.