It is stated that an agreement for stopping the clashes on the northern and southern regions of Karabakh-Azerbaijani border between 15.00 and 20.00 local time is made. In 5 hours, both sides will search for the soldiers who were killed during the clashes.

Speaking to azatutyun.com, Karabakh Ministry of Defence Spokesman Senor Hasratyan stated that an agreement for stopping the clashes on the northern and southern regions of Karabakh-Azerbaijani border between 15.00 and 20.00 local time is made. In 5 hours, both sides will search for the soldiers who were killed during the clashes.

According to Hasratyan, this process is coordinated by the assistants of the representatives of Red Cross and OSCE Minsk Group.

Karabakh Ministry of Defence released a statement claiming that Azerbaijan, starting from the night of April 7, has been violating the ceasefire along the Karabakh-Azerbaijan line of contact.

Karabakh Ministry of Defence stated that Azerbaijan opened fire with various weapons and used two mortars. It is pointed out that the violation took place especially in Taliş Village on the north of the border.

It is also reported that 2 soldiers were killed because of the violation. According to ministry's statement, the soldier who were killed on the northeast of the region was born in 1996 and the one who killed in Taliş was born in 1983. 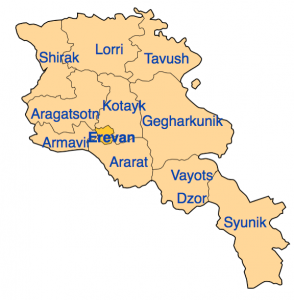 There is no update about the number of civilian casualties. On April 5, Karabakh Ministry of Defence announced that 11 civilians were killed in the attacks.

OSCE Minsk is going to Yerevan

Meanwhile, OSCE Minsk Group are in contact with Karabakh and Armenia. The representatives of the group will go to Yerevan tomorrow after the meetings in Karabakh. Karabakh Presidency made a statement after the meeting with co-chairs of OSCE Minsk Group. “President Sahakyan considers Azerbaijan's aggression as the most important threat against the peace and stability in and around Southern Caucasus region.” In the meeting, President Sahakhyan said that he expects a more severe evaluation from Minsk Group about Azerbaijan's policies.

Armenian Ministry of Defence Spokesman Artsrun Hovhannisyan made a statement in social media. He stated that, on April 7, Azerbaijan army opened fire to military reservations and villages in Tavuş and Geğarkunik regions. According to Hovhannisyan, Azerbaijan opened fire to Karmir, Ttucur and Bağanis villages.

Starting in 1992, Karabakh War was ended in 1994 with a ceasefire agreement between Armenia and Azerbaijan. Since the agreement, in 24 years, the ceasefire has been violated for several times. The most severe violation took place between April 2 and 5. Defined as “war” by some journalists, the intense clashes continued until April 5 and a relatively calm process began. However, this didn't last long. On April 8, towards  morning, the tension started to increase once again.