Trying to build a bridge between Armenia and Turkey with his photography, Umut Vedat tells about his works appealing to the peoples of both countries and projects in Tbilisi.

On November, photographer Umut Vedat went to Yerevan with Turkey-Armenia Travel Grant provided by Hrant Dink Foundation; he aims to build a bridge between two countries through his art. Traveling to Armenia, Turkey and Georgia and documented what he had seen, Vedat held exhibitions in these countries. His documentaries, photography and movies bears the feeling of social responsibility. He worked for private companies before, but he says that social responsibility projects make him happy and help him to develop empathy: “I realized that I create better works when I am fulfilling my responsibilities to the society. This is something that motivates me, nurtures my soul and helps me to develop empathy.

Documentaries from Şırnak to Tbilisi

Living in Tbilisi for several months, Vedat talks about his recent projects: “In 2016, I made the feature documentary titled 'Black Atlas'. This documentary was focused on coal power plants in different places in Turkey like Şırnak, Manisa, Zonguldak and Bursa. I witnessed the local boycott movements and lived in villages. It was screened for the first time in Istanbul Film Festival last year. Now, we are working on a documentary about Tbilisi and the changes in the city. In 19th century, 70% of the population was Armenian and 30% was consisting of Georgians and other minority groups. Today, Armenian population is less than 5%. This is an issue that nobody talks about. Assimilation here is not as severe as in Turkey; there is a different process. This is not the only subject of the documentary, but it covers the issues about Armenian culture by way of foundation of Tbilisi.”

“Living in Armenia filled the gap” 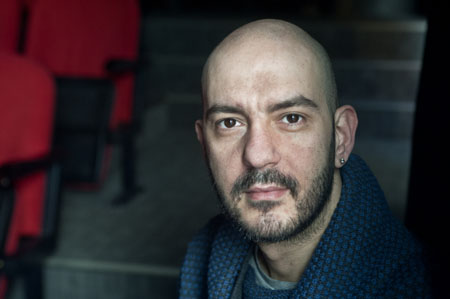 Believing that empathy is as important as having historical knowledge, Vedat thinks that empathy is only possible with becoming acquainted. This thought is what led him to Armenia: “I realized that the history of the genocide is really different than what I knew, when I was a student in the university. This is an issue that is hard to empathize with, though you have knowledge about it. In 2011, I attended Turkey-Armenia bus tour; journalists from Armenia and Turkey came together and traveled around in both countries. I was thinking that I had to get close with Armenian people in Armenia. Though I have Armenian friends in Turkey, I grew up by singing the national anthem with them. I met very beautiful people in that tour and I realized that I had to go to Armenia and live there for a while in order to fill the gaps in my soul.”

Some people told him that this is unnecessary, but he went and lived in Armenia for a couple of months. There, he started to listen to the stories of people and think about how he can communicate with people. He worked in news agencies there, thinking that he needs more than what history textbooks tell in order to explain the situation in Turkey.

He held an exhibition in Istanbul titled “Who am I?”, which consists of works documenting the Armenian heritage in eastern Turkey. He says that he wanted to change the minds of his friends and relatives above all: “The purpose of that exhibition, in which the pictures of the churches that are destroyed or used as barns were featured, was to show Western Armenia, east of Turkey. Many people said, 'Yes, we know that such things happened, but we didn't know about its extent.'”

Presenting this exhibition to people of Armenia and Armenian society in Tbilisi, Vedat talks about the reactions: “I held the same exhibition in Yerevan on November 2016. Some people hugged me and started to cry, after they had seen the pictures. Some others said, 'There are people who came here and carried out some projects, but tehen we never see them again. However, you keep coming here. So, you really want to do this.' These reactions tell me that I am on the right track.”

Then, he decided to live in Tbilisi and held the same exhibition there in order to establish a bond with Armenians in Tbilisi. He thought that the best way of introducing himself to the people is to show them his photography. The exhibition was opened in Tbilisi Surp Etchmiadzin Church on January 19, 2017, after a commemoration event held for Hrant Dink.

Vedat is carrying out different projects with his friends in Tbilisi: “My friend Arsen Khataryan founded a news agency in Tblisi called 'Aliq Media'. I am training the production team of the agency and trying to establish a documentary department in the agency. 'Aliq Media' tries to produce news with independent funds, because many agencies funded by the state hesitate to cover certain events.”

Ego is the greatest obstacle

Collaborating with NGOs in Armenia and Turkey, Vedat tells about his opinions on the current condition of normalization between two countries and the obstacles: “When the representatives of NGOs in Armenia come to Turkey, we talk about these issues. Lately, many projects cannot be conducted. Ego of Turkey is the greatest obstacle. We have to set aside the claim of “knowing the best”. There should be projects in order to reach different audiences. Agos is a good example. We were about to get somewhere in the normalization process, but we went back to the square one in recent years. Now, we withdrew into ourselves even more.”