The exhibition “70TK: From Tatavla to Kurtuluş” will be open until 1 October. We met with its curator Dr. Banu Pekol, to talk about the project.

The Kurtuluş Greek Primary School, located near the Kurtuluş Bus Terminus, closed its doors in 2003 due to a lack of students, and has stood abandoned ever since. Nowadays is home to an exhibition on Tatavla, which was the previous name of the neighbourhood. Taking its name from the bus number 70, which terminates at Kurtuluş, and adding the transformation from Tatavla to Kurtuluş, the ‘70TK’ exhibition displays both the dramatic transformation of the neighbourhood and traces of a lifestyle, which today mostly remains in memories of past residents. The exhibition mainly focuses on the last 100 years of Tatavla, which was populated since the 17th century, through historic maps, archival material, on-site research and oral history interviews. 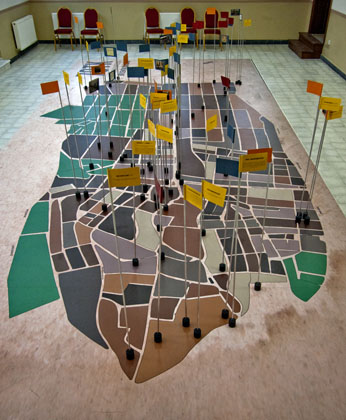 Can you give us some information on Kültürel Mirası Koruma Derneği (The Association for Preservation of Cultural Heritage), which realized this project?

The Association was established in 2014 by individuals and institutions that work in fields with concern for the cultural heritage of Turkey. Its main mission is to preserve the architectural and intangible heritage created by all communities that lived in these lands, and help transmit this cultural heritage to future generations. We also undertake projects that display the memory of multicultural spaces/settlements. We regard architectural and cultural memory as an indivisible whole.

Where did the idea of the ‘70TK’ exhibition come from?

We were part of the ‘Actors of Urban Change’ program, which aims to achieve sustainable and participatory urban development through cultural activities and by using specific potentials of culture as driver and enabler of positive change. Together with my colleague who lived in Kurtuluş, we designed a project focusing on the memory of the neighbourhood. The exhibition is one of the end results of the 18-month project.

Tatavla is a place where numerous significant people and places intersect, in a way it is like a miniature version of old Istanbul. Sabuncakis established his first flower gardens here, Vakko opened their first fabric printing factory here, Rıfat Telgezer who is considered to be a pioneer of circuses in Turkey, would set his circus tent here, the first record company in Turkey; Orpheon Records that was later bought by Columbia Records had their factory here, the Jack the Ripper of Istanbul, named Hrisanthos who has two theatre plays and one novel written about him, also resided here. So many things happened here, yet  not one trace of any of them remains, even those from 50 years ago.

People assume that they once they are accustomed to a certain place in their daily lives, they know that place; they even judge it and define it accordingly. But such familiarity does not equal reality. We have had numerous surprised visitors, saying “All these years I’ve lived in this street and never knew about this”…

Can you tell us about the oral history anecdotes installed in the classrooms of the Greek Primary School? Who did you interview?

We identified our interviewees through the network of Paros magazine, which was our partner in this project. We interviewed people who had lived through the traditions and lifestyle of Tatavla, and they were mostly over 60 years of age. Through our exhibition, we met even more such residents, and we now feel the urge to listen to their stories. Our funding body has just announced a call, saying that we can propose one other activity related to our project to take it a step further. We really want to take this exhibition to Athens, and to conduct another series of oral history interviews with the old residents of Tatavla, who had to move to Greece. Similarly, we also want to include previous residents who have now moved to neighbourhoods such as Suadiye. 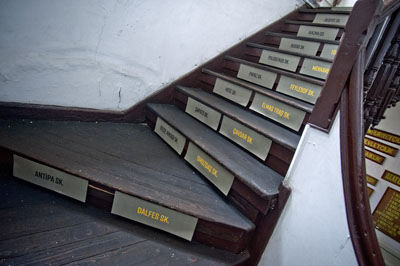 What are the reactions of the residents who lived through the period of Tatavla that you display in the exhibition?

I suppose it is a bit of a traumatic exhibition, in this case. Although we had no such intention, people leave the exhibition with tears in their eyes. It is naturally more meaningful for the graduates of the school. The ‘memory map’ which covers the floor of the main room on the ground floor allows not only a birds’ eye view on the neighbourhood, but also documents what used to be there on a micro-scale. We did not only include sites on this memory map, but also included anecdotes from the oral history interviews as well as related visual archival material. For example, concerning the Tan Cinema, we learned about how one would go to the cinema in the past:  you would pay for a single ticket and enter whenever you wanted, without having to wait for the movie to begin, and leave whenever you pleased. The porch of this cinema also used to be a site where kids would exchange comic books. All sites have a story to tell, they are never simply architectural enclosures. Seeing the ex-residents walk through the memory map in the exhibition has been a joy, hearing them exclaim to each other: “This was where we’d go after school, we’d have a profiterole here, remember?”

What led you to hold the exhibition at the Kurtuluş Greek School?

We asked the church foundation, which owns the building, and they agreed to host the exhibition for a short period. Architecturally speaking, the building is very well designed, and so it would a wonderful setting for nearly any event.

In the exhibition, you display the vegetable gardens, which lay beyond Savaş Street, which is surprising to those who don’t know the history of Kurtuluş. In the aerial maps you included, you show how that vast green land was engulfed by buildings over the years.

Some of the past residents mention those vegetable gardens as “we would go to the cabbages after school”. Everyone expected things to continue as they were, yet that lifestyle ended unexpectedly, through very harsh historical ruptures.  And all very recently. Residents who are my mother’s age vividly remember these gardens, the carnival, the Easter processions, and other traditions. We are talking about 50 years, which is a very short period for this city. Not only did this neighbourhood lose it buildings, but also its residents.

There is a room in the exhibition devoted to the dramatic transformation of the architectural heritage of the district. Can you tell us the story of that content?

A scholar named Timur Kaprol photographed many historical buildings here in the 1990s, while writing his master’s thesis. I found the location of and photographed all these buildings today, from the same angle. A comparison of the old and new is appalling. Either the building is totally demolished, or it has been kept as a facade and elongated, with the addition of multiple storeys above it. These are all listed historic buildings! In Turkey, the categorical listing process of houses was mainly at the will of the owner. If the building is historic, until the municipality came to intervene (if they ever did, that is), the owners were able to intervene as they pleased. In this room, you will also see collages of apartment names. At first, I was only shooting apartment names such as ‘Ararat’ or ‘Hayk’, then I went on to record them all. There are nearly 300 photographs, which include professions such as ‘dülger’ (carpenter), or place names such as ‘İstanbul’, ‘Erciyes’, and even ‘Nevada’. I also found many named ‘Mısırlı’ (Egyptian), and ‘Nil’ (Nile). Some have very eccentric names such as ‘Panaroma’, ‘Bohem’, ‘Atom’ and even ‘Bambi’…

What sort of archival research was conducted for this project?

We searched newspaper archives as well as the Ottoman and Republican State Archives of the Prime Ministry. The newspapers had many interesting stories, news and adverts on the neighbourhood. The comic strip ‘Abdülcanbaz’ also mentions Tatavla a couple of times. Tatavla used to be a very entertaining district, at the same time. It was famous for its meze (appetizer) shops. Even as far back as 1900, a conference on alcoholism was held here; we found the announcement of this conference through our research. After reading all these, you go out on the streets of the neighbourhood today, and what you see completely contradicts all you’ve read.

“The masquerade is only a memory” 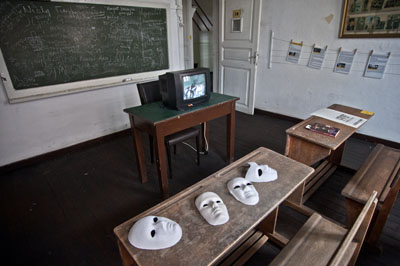 One room in the Kurtuluş Greek Primary School is devoted to the Apochria masquerade, otherwise known as Baklahorani. This was the last chance to have fun before the month of fasting and was the largest event of the year which not only the Turkish Greeks, but all residents of Tatavla and beyond would celebrate together. It was legally banned in 1941, citing security concerns and was continued on a smaller scale, according to accounts of some residents. In 2009 it was revived, yet to be abandoned again after 2014. Two accounts from newspaper clippings in the exhibition are useful to understand how Baklahorani changed over the years through social events:

“The confrontational dances began in the dorm, accompanied by Kör (Blind) Hactziki playing the zurna, and Yovanaki the drummer from Edirnekapı. There was ample soda and lemonade instead of champagne. Masqueraders from all neighbourhoods were there, entertaining people with various mise en scènes. A carnival-goer lying inside a coffin, pretending to be dead, suddenly leaps out”. (Proodos newspaper, Istanbul, 1918)

“The masquerade celebrations ended this year on a sad note. The large square to the right of St. Demetrios Church was almost empty last evening. The trams carried very few passengers to Kurtuluş. Elenitza from Pera, a firm follower of the masquerade for 45 years who is a teacher known for her always powdered-up look, did not show up at the Ararat Club. (…) In short, there was no masquerade yesterday, the masquerade is only a memory.” (Apoyevmatini newspaper, İstanbul, 1942)