Nancy Kricorian, author of the famous novel Zabelle, has returned to Istanbul after the Anatolian trip she took in the footsteps of her grandmother. She met with us to share what remains with her, with questions on her mind and memories in her notebook.

Nancy Kricorian, Armenian-American author of the famous bestseller novel Zabelle, was in Istanbul last week. Kricorian toured Anatolia during the summer months, in the footsteps of her grandmother, the protagonist of her novel Zabelle. The “Armenian Heritage Tour,” which has been taking place since 1994, has almost become a pilgrimage for the participants; hundreds of Armenians have traveled around Anatolia with this tour in the last 20 years. The itinerary takes shape with input from participants, as they want to see the places where their relatives and families used to live. Kricorian says: “We call this trip ‘pilgrimage’ and ourselves ‘pilgrims.’ But it has nothing to do with going on a pilgrimage: it is truly a form of resistance; a resistance against being erased from this land, against disappearance and denial.” Nancy Kricorian, who returned to Istanbul as the invitee of Columbia Global Centers, shared with us what remains with her [from the trip], with the questions on her mind and the memories in her notebook.

How was the Anatolian tour? How did you feel when you encountered the heritage of Armenians?

The trip was wonderful, but at the same time exhausting. We were on the bus for 10 hours each day. I say we covered as much as a third of the country. We also faced many challenges; everywhere we went, we experienced moments of sadness and bouts of crying. For example, when we arrived in Elazığ, one of the participants, Dikran Fabricatorian, started telling us the story of his family. He had never been there and he wanted to see if any traces of his family remained. During that period, Dikran’s grandfather Krikor had started a weaving workshop in Elazığ. The silk that he weaved was of such high quality that he even started getting orders from abroad. Because his business was so successful, the Ottoman sultan changed Krikor’s last name from Ipekjian [Ipek means silk in Turkish] to Fabricatorian. After Krikor died in 1902, his five sons took over the workshop. They expanded their business and opened two big factories. The five sons built five mansions adjacent to each other. In 1915, they were all killed, and their wives and children were exiled. One of these children is the father of Dikran Fabricatorian. These five mansions were demolished in the 1950s, and apartment buildings were built in their place, but they retained the name ‘Five Brothers.’ We were walking on a crowded avenue, twenty of us following Dikran and the guide, until we saw the signs: ‘Five Brothers Building’ and ‘Five Brothers Passage.’ 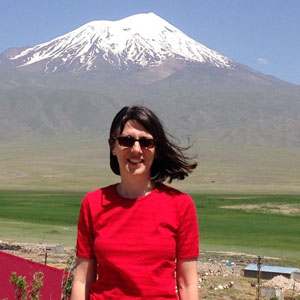 Can you tell us a little about your group?

We had a wonderful group: there were many Armenian participants from Australia, the United States and other places. There were other interesting people in the group as well. For example, two Norwegian women were on the bus with us. One of them was an historian who was retracing the travels of a Norwegian missionary who took care of Armenian orphans between 1915 and 1918. The other was a student of this historian-scholar and a documentary filmmaker. She was filming a documentary about the same missionary. Thus, we also sought what they were looking for; we toured German hospitals, orphanages, etc. This Norwegian missionary worked in many places from Marash to Van and we followed in her footsteps. One day we were so exhausted from all the driving that I suggested to them that they issue a disclaimer at the end of the film when they complete it, saying: “No animals were harmed during the making of this film, but some Armenians were made to suffer!”

Can you tell us about your grandmother’s story?

She was born and raised in Mersin, her parents and siblings died on the way during the deportations, and she lived with her brother in a refugee camp at Ras al-Ain. Then they were taken to an orphanage. However, she didn’t want to stay in the orphanage, and I wish I had her asked her why. She decided to leave the orphanage with her brother, and from there she first went to Mersin, then to Cyprus. In Cyprus, her path crossed with that of my grandfather’s, who had migrated from Adana in 1911, and the story moves to Massachusetts, United States. That is also where I was born and raised. My first novel Zabelle is a work of fiction that builds on the story of my grandmother. It is not completely her story; it is a work of fiction that draws from the stories my grandmother told me, from other stories I heard at church, and from pieces that I wrote inspired by these stories. When it was first published in 1998, it suddenly became very popular. Zabelle was the grandmother everyone loved very much; the novel was very popular in the American-Armenian community. It was translated to Turkish and published by Pencere Publishing under the title Zabel (2003). My second book, Dreams of Bread and Fire, was not met with the same enthusiasm. I should have named it The Bad Armenian Girl. The daughter that no one wants – her life has sex, drugs and the like. Of course, the Armenian community did not embrace this character.

You define the tour as a kind of resistance.

Yes, doing this tour is a kind of resistance. It is a way of saying, “We still exist and we are still here.” At first, I felt very sad. It felt as though we were chasing ghosts. Then, however, whenever we prayed in a church converted to a wedding hall, a barn, a mosque, or to a museum with a gigantic Turkish flag hanging in front of it, I started feeling something which affected me deeply: this is a kind of resistance for me. I have never been a religious person and I always considered religion as a tool of repression, but I was weeping every time I visited these churches that are no longer churches. And this is actually the strange part: we call this trip a “pilgrimage” and ourselves “pilgrims.” But it has nothing to do with going on pilgrimage: it is truly a form of resistance, a resistance against being erased from this land, against disappearance and denial.

After you completed the trip, you asked yourself a question on your blog: “What will I do with this knowledge that I have acquired?” Have you found the answer in the meantime?

I completed this trip two months ago, and I am still processing it. We have been talking about issues like resistance, memory, and mobilizing memory for change. Sometimes it feels a bit academic to think about such keywords and I’m ambivalent. There are people in Turkey who go out on the streets and say, “We are all Hrant, we are all Armenians,” and I don’t actually find this convincing. I hear people saying, “But this is an expression of solidarity.” Okay, but then it makes me ask what people did after walking the streets shouting this slogan. I also know that those who live here and those in the Diaspora might feel differently. I am still in the process of thinking about all this.

Are there any other things that bother you in a similar way?

The other thing that bothers me is the discourse of “Our common Anatolian pain.” I refuse dialogue as an “industry” and as an equivalence between the two sides. I reject the discourse of “Our common Anatolian pain,” which comes to mean, “you have suffered, and so have we.” Just because both sides have suffered, it doesn’t mean that the pain is mutual. If we want to come to a mutual understanding, then the truth has to emerge first. There is also the issue of the massive dispossession and transfer of wealth, which is not talked about except in terms of suffering. This [Armenian dispossession] is the exact source of the wealth of some of the richest Turkish families. A Palestinian friend of mine, who was a negotiator in the Israel/Palestine issue, told an Israeli negotiator that the Israelis could at least apologize for what they  did in 1948. The answer she received was that this was impossible to do because it would mean acknowledging that the state of Israel was born in sin. The founding mythology of the Turkish state is firmly bound up with its Republican and Turkish identity, but this state is founded on the massacre of hundreds of thousands of Armenians, the banishment of the entire Greek community, and the repression enacted on the Kurds for decades.

“Flowers” and “The Bridge” 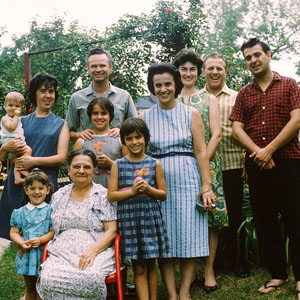 My grandmother always said: “We come from near Tarsus, do you know St. Paul of Tarsus? I was born in Mersin, your grandfather came from Adana.” I had not tried to find Adana and Mersin on a map until after my grandmother died.

When we were traveling south past the Toros Mountains, we started seeing the road signs for Mersin, Tarsus and Adana. Our guide warned me that no traces of the Armenians remained in Mersin. Everything had vanished. No churches, no schools, nothing…

So I gave up trying to look for traces, and I started imagining that long ago my grandmother had walked those same streets I was walking. I imagined drinking from the same fountain, looking at the same sky. There were palm trees by the roadside, followed by pink oleanders and tall thistles.

Then we went to the port, where the boats were tied up and the Mediterranean lay behind them. My grandmother had seen the same sky and had taken strolls on the same beach. How she loved her garden in New England! How much she must have loved the pink and white oleanders, bougainvilleas and red hibiscus flowers in Mersin.

In Adana, we went to the old Armenian neighborhood, and there was construction on the main road there. The old, worn charm of the avenue, which can still be felt on some side streets, has been replaced with a kind of “gentrified” sameness. From there, we walked to the Big Clock Tower, built by two Armenian architects in the 19th century, but that had also been shrouded for renovation. Our guide informed us that in the 1909 Adana massacres, when more than two thousand Armenians had been murdered, the Turkish crowd had gathered at this clock tower before the attacks. My grandfather left Adana in 1911 in order to go to America.

Today, none of the churches or Armenian schools still stand in Adana. This is another place from which we have been completely erased. Then we went to the Taşköprü (“Stone Bridge”) over the Seyhan River, a relic from Roman times. My grandfather died when I was 3 years old. I imagine a young man from a faded photograph. He wears a coal-grey suit and his mustache has been freshly combed. He walks over the bridge with a newspaper under his arm. The traces of Armenian presence are there for those who know how to look, but the memory that carries these traces has been repressed.

*translation from the Turkish by Cihan Tekay