Charlie Hebdo, the French satirical magazine that was the target of the armed attack on January 7, had recently also focused on issues related to Turkey. Particularly the Armenian Genocide and the Kurdish Question featured in the pages of the magazine in various contexts.

The draft law that proposed ‘a one-year prison sentence and 45 thousand euro pecuniary fine for the denial of legally recognized genocides’ was the topic of the magazine’s issue dated 28 December 2011.

The cartoon titled “Law on Armenian Genocide: Turks retaliate” depicted Erdoğan saying, “We will no longer buy the weapons we use to massacre the Kurds from France!”

The draft law, supported by President Nicolas Sarkozy, had been voted by Parliament in December 2011, and by the Senate in January 2012, however, it was rescinded by the Constitutional Council of France on the grounds that it was in violation of Article 33 of the Constitution, and freedom of expression. 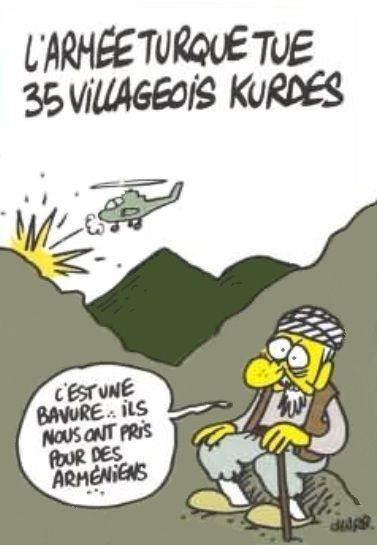 Another important incident featured in the pages of Charlie Hebdo was the Roboski massacre that took place on 28 December 2011, where 34 people were murdered, 17 of them children.

In the cartoon, once again in reference to the Armenian Genocide, a character representing a Kurdish villager says, “It’s a blunder, they must have taken us for Armenians”. 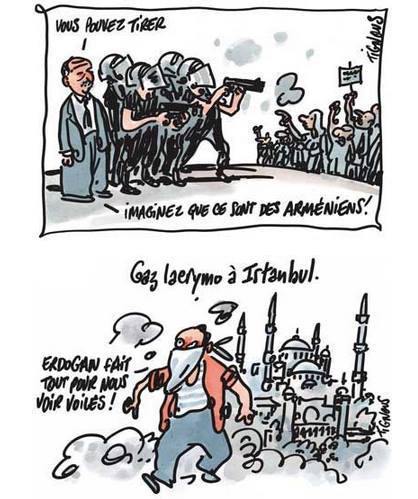 The magazine reminded its readers of the Genocide during the Gezi Park Resistance in 2013 that was met with brutal police attacks. In a cartoon, Erdoğan says to the police regarding the protestors, “You can shoot, imagine they are Armenians”.

In another cartoon titled “Tear gas in Istanbul”, a protestor is depicted as saying, “Erdoğan does everything to see us covered up”. 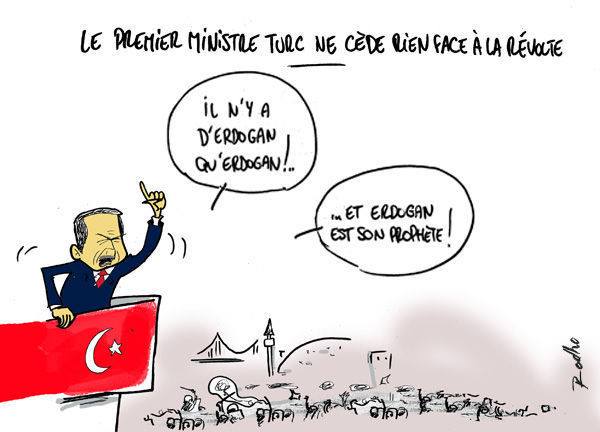 A further cartoon on the Gezi Resistance was published with the title “The Prime Minister of Turkey refuses to step back”.

The cartoon refers to the Shahada, or Islamic testimony, and depicts the former Prime Minister saying, “There is no Erdoğan but Erdoğan, and Erdoğan is his messenger”.