Journalist and historian Vicken Cheterian wrote a book which assesses the effects of Armenian genocide on global politics, academic research, Kurdish question, Turkish and Armenian societies during the process that has been going on for 100 years. Focusing mainly on the post genocide period, Open Wounds: Armenians, Turks, and a Century of Genocide considers Hrant Dink’s assassination as a milestone.
PERPETRATORS

The architect of the ‘internal enemy’ concept

Bahaeddin Şakir, who in March 1915 arrived from Erzurum to Istanbul, was convinced that Teşkilat-ı Mahsusa, or the infamous intelligence network Special Organization, had to now focus on the ‘internal enemy’. The report he presented to the Central Committee of the Union and Progress Party was influential in the decision for ‘deportation’.
RESCUERS

‘If you are sending me there to deport the Armenians, I can’t do that!’

A hand reached out to the rescue of Armenians when the inhuman deportation order was sent from the Union and Progress HQ to the Konya province. That hand belonged to Governor Mehmet Celal Bey (1863-1926).
PERPETRATORS

In 1913, Mehmet Reşid was appointed governor of Karesi, a region that could almost be described as the testing ground of the Armenian Genocide. Reşid Bey played a significant role in the forced deportation of Greeks from the region, and this ‘success’ brought him the rank of the General Secretary of the General Inspectorate for the provinces of Van, Bitlis, Diyarbekir and Mamuretülaziz. He was appointed to this post because Interior Minister Talaat Pasha considered him “active, competent and patriotic”.
1915 TALKS

‘Questioning official discourse is the path to recognition’

Raymond Kévorkian’s work ‘The Armenian Genocide’, a masterpiece in its field, has been published in Turkish by the İletişim Publishing House. In addition to how the book came about, we spoke to Kévorkian about Turkey’s policies regarding the Genocide.
1915-2015
03.28.2015

“Since I won’t commit these murders, please accept my resignation!”

Kütahya Governor Faik Ali Ozansoy was one of those who displayed the courage to stand up to the Union and Progress government to protect the Armenians during the inferno of 1915. In our “Rescuer” series, Ari Şekeryan sheds light on Ozansoy’s struggle, and how Armenians thanked him.
PERPETRATORS 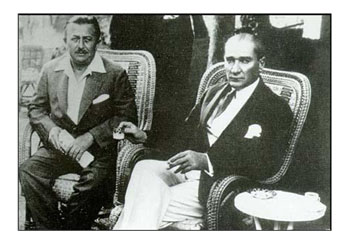 Social engineering was an important method applied by the Committee of Union and Progress in establishing relationships between State and society. This policy, with aspects of resettlement, assimilation and slaughter, appears clearly in the ideological and political progress of Union and Progress members. The Union and Progress Party’s policy of Turkification and Islamisation, applied across the empire, was adopted by the Kemalists for the new Republic. Şükrü Kaya was a member of the elite group of actors who implemented these policies.
RESCUERS

Those who defied orders in Diyarbekir

Along with Mamuretül Aziz, the Diyarbekir Province is an area where we encounter the highest number of instances of disobedience during the Armenian Genocide, or where the most accounts of disobedience have reached the present day. The sense among communities in the area that “with 1915, there was an irreversible rupture in our fate as well” is perhaps the most important factor in that the memory of the period has remained so vivid in the region.
PERPETRATORS