Working on the Christians in Turkey and Middle East, journalist and historian Sebastien de Courtois was in İstanbul to attend “Minorities in Middle East: A Tough Future” conference that was held in French Cultural Center on October 9. We talked to Courtois about the Shingal exile, refugees’ condition in France and the ancient minorities of Middle East.

Sebastien de Courtois, in his book “In the Babylonian Rivers, We Were Crying”, tells the story of the Yazidis who were exiled from Shingal in 2014. He also wrote a book about Assyrians based on his experiences in Tur Abdin. In 1998, when he was working as a lawyer, he visited Mor Gabriel Monastery in Midyat and it was a turning point for him. He wrote his doctoral dissertation on Assyrians and became a journalist. Then, he started to focus on the minorities in Middle East.

Courtois went to Shingal in 2014 in order to bear witness the Yazidi exile and we talked about the photos of Yazidis who were walking across the desert and whether those photos are similar to the ones that were taken on the deportation routes during the Armenian Genocide. Courtois said, “The locals told me that 1915 has started again. However, as a historian, I think that drawing such parallelisms is risky. The relation between this terrible reality and the history is a different reality, though it is not a different thing.” 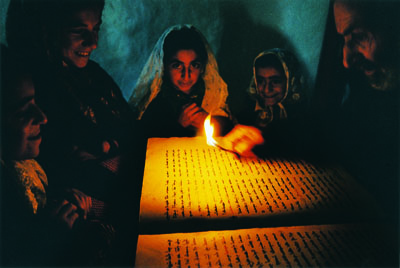 You went to the border after ISIS started to attack Shingal in 2014. What were your initial observations?

As a journalist, going there as fast as possible was my duty. On June 16, the army retreated from Mosul and ISIS entered the city; so, it was obvious that their new target will be the Christian settlement that is 40 kilometers away from Mosul. This happened on August 6-7. We headed to Iraq border. There were thousands of Yazidis and they hadn’t brought anything with them.  They were calm and just waiting for some food and water. We headed southward, to Duhok. There were thousands of people in the camps which couldn’t have provided anything to them. They told that they came from Sinjar by walking for 2-3 days. They walked across the desert where it was 45°C. They were just approaching us and telling their story. They were in need of talking after the trauma. They were talking about the same stories, same massacres. Abducted girls and women… A woman told me that ISIS took a baby from them and killed her. In such a situation, you feel that you are useless as a journalist. I understood what exile really means for the first time in my life in Middle East.

What was the condition of the minorities in Iraq and Syria before ISIS?

The problem between Iraq and Syria started in 2003, during the US occupation. L. Paul Bremer and George Bush were responsible for it. From 2003 onward, the balance between minority and majority was tough. It is obvious that the weakest one cannot survive. Christians, Yazdisi, Turkmens, all of these minority groups were started to be seen as enemy and foreign. However, the local Christians have been living there for 2000 years. We shouldn’t forget that the Muslim groups in that region were Christians once. Today, though the modern mentality and ignorance considers them as foreign, Christians are the builders of the society there. You can observe that in street, in daily life.

“The majority of the people are against refugees in France, but changing the mentality is our duty. And this can be realized by reconciliation, not by denial.”

Most of the Christian minorities had to leave Middle East like most Syrians. Is there a different approach to Christian refugees in Europe?

They don’t care. They just act like they don’t care. When you look at it from the perspective of the French government, it is ironic. With the actions that they have been taking for the last 4 years, they became one of the reasons of the civil war. Now, we are paying the price by accepting the refugees. Of course we have to accept them, because we are responsible for it in a sense.

Recently, some mayors in France made statements about accepting the Christian refugees. What do you think about that?

This is unacceptable for me. If we don’t inquire about the religious beliefs when we conduct arms trade, we shouldn’t inquire about it either, when we accept refugees. We have to respect different ideas, because these statements present some ideas of the public. I think that most people agree with them, but they don’t have to courage to express it.

What do people in France think?

They are afraid. They see that refugees are walking on the roads and dying on the shore and they say, “What is happening?” If you don’t understand what is happening in your neighborhood, you cannot understand what is happening in distant places. Now, maybe they will think that they are human too. However, we should acknowledge that everyone cannot and won’t think like that. The majority of the people are against refugees in France, but changing the mentality is our duty. And this can be realized by reconciliation, not by denial. 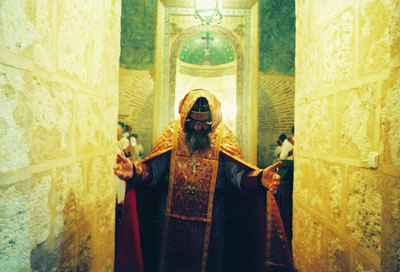 What are the current living conditions of the Assyrians in Iraq?

Most of the Assyrians were living in Karakus. Before 2003, there were one million Christians in Iraq; now, it is estimated that there are 200.000-400.000 Christians there, we don’t know the exact number. They peacefully live in Kurdistan Autonomous Region, but they want to return to their lands as soon as possible. Yet, ISIS won’t be leaving there willingly. No one knows what will happen in the future.

“Hierarchy is unacceptable among cultural heritage”

Before this interview, you said that visiting Mor Gabriel Monastery was a turning point for you. What do you feel when you see the churches that are destroyed or ruined in Anatolia?

I literally cry when I see the churches in ruins. The temples of Georgians, Greeks, Armenians, Assyrians and Yazidis aren’t less important or less Anatolian than the Artuqid or Seljuk heritage. Hierarchy is unacceptable among cultural heritage, because those structures belong to all people and to humanity. It is agonizing to see them in ruins, because nothing had been done to protect them. Of course there are exceptions: Akhtamar Church, Sumela Monastery, Mor Hananyo Monastery in Mardin… But those places were renovated with the purpose of advertisement. It shouldn’t be that hard to carry a comprehensive research on cultural heritage. So, a good leader for Turkey would be the one who can say, “We all are the parts of this country and Turkey is proud of its diversity.” It is essential to see that these monuments don’t represent a difference between east and west, they represent the connection between the present and past civilizations. Look at Hasankeyf; the oldest tomb in Anatolia is there, it dates back to Artukid times, but no one cares. This is not about politics; they just don’t recognize the past.