Cultural Heritage Map of Turkey is created at the end of a months-long study and research. Thanks to the project of Hrant Dink Foundation, an interactive online map is created. Through this map, it is possible to list and examine the sanctuaries, schools, hospitals and cemeteries of Armenians, Greeks, Syriacs and Jews in Turkey.

This inventory is a unique source for understanding what we have lost along with the civilization. You should just visit the website: turkiyekulturvarliklari.com

Hrant Dink Foundation took the inventory of the structures like churches, synagogues, monasteries, schools, hospitals and cemeteries that were built by Greeks, Armenians, Syriacs and Jews. After working and researching for almost 2 years, around 10.000 structures are revealed. This inventory, which reveals the cultural heritage of people who had been living in Anatolia for centuries, is the most extensive work that has been made so far. The foundation made the data available to everyone by an interactive map.

The research started in 2014. The team of researchers consisting of Nora Mildanoğlu, Zakarya Mildanoğlu, Mustafa Batman, Ezgi Deniz Berk, Merve Kurt, Vahakn Keşişyan, Tuna Başıbek, Aleksandros Kamburis, Şahika Karatepe, Zeynep Oğuz and Norayr Olgar reviewed various sources. Along with the structures that still stand, they also listed the structures that were destroyed, burned down or not protected; the ones that are being used as storage or barn; and the ones that were transformed to a mosque. Turkish EU Ministry, Open Society and Chrest Foundation supported the project.

This is a first

Project coordinator Merve Kurt pointed out that this is the first project that reveals the cultural heritage of the Anatolian non-Muslims.

“We reviewed the primary and secondary sources. During the first year, we focused on the Armenian culture; and we focused on the heritage of Greeks, Jews and Syriacs during the second year. Church books were the most useful sources. We worked on the Ottoman Archives of the Prime Minister’s Office (Başbakanlık Osmanlı Arşivi). We added every church or school mentioned in the sources to the inventory.”

Noting the difficulties in the process of research, Kurt said, “For Greek sources, we went to Centre for Asia Minor Studies in Greece and for Syriac sources, we went to Sweden. We got a lot of data from there. Names of the places were the most difficult part. We worked in accordance with the current provincial borders. We conducted another study on the old provincial borders in the archives. Comparing the old names with the new ones was difficult.”

Data is available to the public

Kurt emphasized that the map on the website is open to the contribution by everyone.

“That map is the visualized version of the project of Hrant Dink Foundation; an interactive map which shows the churches, hospitals, synagogues, schools, monasteries, orphanages and cemeteries belonging to Armenians, Greeks, Syriac and Jews. It makes easier to access the inventory. Photos, historical facts and their sources are shown on the map.”

There are a lot of structures that should be protected

Kurt pointed out that this is a project that can raise awareness and reveals the fact that there are a lot of structures that should be protected. “Though those structures are officially recorded, they are in ruins; treasure hunters are still doing excavation work in those places. There are preservation boards in every region, but in Kayseri, for instance, there 30-35 registered structures, whereas we listed 130. Some structures there are ignored. Our work is an important data for them.”

The project will continue

Stating that the project will continue for conducting the field study, Kurt spoke about what is to be done next: “We will check our data on the field. And there will be another field study. We will determine 3 regions. We will choose a school, a street and a church and conduct oral history study in those places. People’s story will be recorded. Also, locals will decide how they want to see those structures and we will share the result of this survey with the authorities.”

Researcher Vahakn Keşişyan told about the sources and methodology that they used during the inventory work.

“In the first stage, we formed the inventory by determining the main sources: the list of Armenian churches and monasteries that was prepared between 1912 and 1913 by the Armenian Patriarchate of Istanbul to be submitted to the Ministry of Justice and Religion (Adliye ve Mezahib Nezareti), edited and published by Aram Khaçaduri Safradsyan, and translated from Armenian into Turkish by Zakarya Mildanoğlu; Raymond Kevorkian and Paul Paboudjian’s extensive work on Ottoman Armenians; archives of Agos Weekly Newspaper; and postcards from the Calumeno collection that were published by Osman Köker. We chose different main sources for every society. We started from those sources and began to review other sources for determining what is lacking. It was hard to find such extensive main sources for other societies. For Jewish heritage, we used Synagogues of Turkey, the extensive survey put together by Naim Avigdor Güleryüz in 2008; the detailed 2004 article by Süleyman Faruk Göncüoğlu about the synagogues in the Haliç neighborhood of Istanbul; various articles published in Şalom Weekly Newspaper; and İnci Türkoğlu’s 2001 dissertation on Synagogue Architecture in Turkey from Antiquity to Today. For Greeks, we couldn’t have found a main source, but there were various sources in different places. The largest source was Centre for Asia Minor Studies. They conducted oral history studies with the Greeks who were subjected to population exchange. There is a huge data and we worked on them. It was a hard work, since they are not digital; we had to read them all. For Syriacs, we used Gabriel Akyüz’s book on the churches and monasteries around Mardin; studies on the buildings in the Tur Abdin region by Getrude Bell in 1910 and Hans Hollerweger in 1999; and Elif Keser Kayaalp’s dissertation on the church architecture in Northern Mesopotamia. In addition to the cultural heritage of the 4 societies that we worked on, we found structures belonging to Georgians, Bulgarians and Levantines. However, we couldn’t add them to the inventory, since they are not in the scope of the project. But we have the data.”

Stating that they found way more structures than they were expecting, Keşişyan said: “When the second stage was started, there were 4000 structures that belong to Armenians and 2000 Greek structures. At the end of the study, there are 4000 Greek structures. We found almost 700 Syriac structures; at the beginning of our study in Kayseri, the number was 250. After the study on Kayseri, it reached to 350 and then to 400 when we went to the field. When you focus on a single place, the number increases.”

There is an interrupted period in history

Researcher Aleksandros Kamburis told about the study on Greek structures:

“Three institutions took part in our study: Patriarchate, consulate and Centre for Asia Minor Studies in Athens. We got the most of the data from there. The most important problem is the disappearance of the historical information. In İstanbul, it is not possible to find enough sources in Greek. Greeks took most of the archives and records with them, when they were going to Greece. We can find them in Centre for Asia Minor Studies. Minorities don’t have a common information or memory center. There was a library taken from Greek Literary Foundation. There were important researches. This library was taken away from the foundation and got lost. We lost really important historical information. In the studies, we can find realistic information until ‘20s; we don’t have any information about what happened after ‘20s. We cannot trace the churches and public buildings. When people came back, they found out that the churches are not there anymore and thus, the information gets lost.”

Changed names are the most important problem

Researcher Tuna Başıbek told about the details of the study conducted in the Ottoman Archives of the Prime Minister’s Office:

“There are two main sources in Ottoman archives. One of them is a book; we don’t know its exact date, but probably, it was kept in late 19. or in early 20. century. It contains sufficient information. Everything is listed meticulously in a technocratic way. The other one is the church books. There are 10 books and 7 of them are in the archive. They were sent to the center by the local clergy. The structures, their locations and reconstruction are recorded. They contain more detailed information. Names of the places are one of the most important problems. The officials who were keeping the books either didn’t know the names of the places or they misspelled them; or the names and the borders are changed. We are able to determine the churches, their locations, their congregations and their landlords. The records show their reconstruction dates; so, we don’t know when they were originally built.” 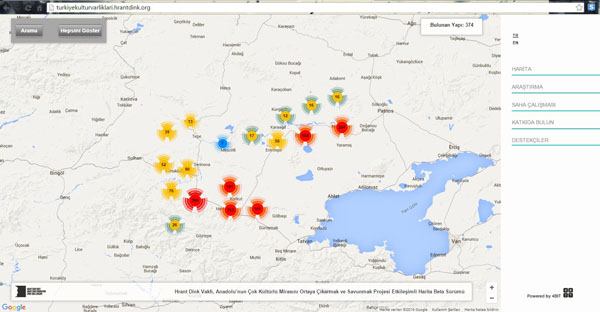 There is diversity in Jewish culture

Researcher Zeynep Oğuz spoke about the methodology of the study on Jewish public buildings:

“Language was a problem; so, we used secondary sources, but sometimes, the sources in Turkish are more useful concerning the information on Turkey. There are books by Naim Güleryüz which contain references to the structures that don’t exist anymore. We understood that Güleryüz’s work is the most extensive one. In fact, there are academic studies in English. Thanks to media organs like Agos and Bianet, we realized that sold houses and synagogues are not recorded in those studies. There are almost no retrospective sources. And we cannot say that there is continuity in the information. There are active synagogues in places like İskenderun and Hatay; this is an unexpected thing for me. There is diversity in Jewish culture. We know about the structures that belong to Ashkenazy and Sefardim, which are rather recent. However, there are older structures in Turkey.”