Hrant Dink Foundation collected its fieldwork for protecting, restoring and preserving the structures of cultural heritage into a book that is titled as “Kayseri with Armenian and Greek Cultural Heritage.” As part of the study, Hrant Dink Foundation researchers reviewed the written sources and also carried out a fieldwork in Kayseri with experts from Association for Protection of Cultural Heritage. In this fieldwork, a detailed cultural heritage inventory of Kayseri is recorded and detailed architectural analysis of 18 historical structures that should be protected immediately is provided. In the book, there is also various articles on Kayseri. Published by Hrant Dink Foundation, this book can be taken free from the foundation.

In the fieldwork, 181 out of 377 existing structures were spotted. No trace could be found belonging to 208 structures. 113 out of 181 spotted structures belong to Armenians and 68 of them belong to Greeks.

Researcher Zeynep Oğuz stated that the people have an important responsibility about the future of these structures: “Our fieldwork captures the situation in 2015, but, given the increasing destruction, we don't know how many of these structures will remain after 2 years. Kayseri's past is very rich, but there are few sources about its history. Universities and museums should develop a new discourse which emphasizes that non-Muslims are an indispensable part of this city. The heritage can be protected only with the development of the memory of the locals and the entire society. So, the people have an important responsibility. We carried out this work with the help of the locals of Kayseri. We wanted to show them that the treasure is above the ground.”

Banu Pekol from Association for Protection of Cultural Heritage pointed out that the structures are in great danger, though they are registered: “18 of the structures that we spotted have great architectural value and they are also in risk of destruction. We provided some recommendations for eliminating the risks. All of these structures are registered. However, being registered doesn't mean protection. They have been facing with threats like fire, flood and vandalism. Also, treasure hunting is also very common in Anatolia. All of them are left unattended; they are not even locked. Everyone can freely enter those structures. They dug everywhere; the damage is really grave.”

This book is dedicated to Sarkis Seropyan, who was one of the founders of Agos. In the book, there is also an article by Seropyan's son Vağarşağ Seropyan that he wrote for his father. 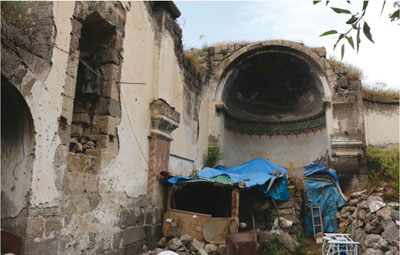 ownership status: private property (under the auspices of Kayseri Governorship)

History: The church is situated on a courtyard surrounded with walls close to the village entrance. Referred by travelers as “newer and better school compared to that of the Greek church”, the church is known to have been constructed in place of a former church dedicated to Surp Asdvadzadzin which burned down in 1858, that its dome was constructed in 1860, and that it was still standing in 1919.

Present condition: Parts of the walls, interior columns, and spaces of the church have not survived. Today it serves as a stable with a house appended to it on the west and south walls. The walls of the apse and the west wall are still standing. The entrance to the structure is through the northwest wall since the narthex is currently a part of a residence. As is evident from the inner inlays of the arch, the upper story of the narthex is later walled up with rubble, leaving small window openings in the middle and on the sides. Although the plan of the structure is hard to map out due to alterations over time, the partly standing exterior walls and traces on the interior surfaces give an idea about the plan. The roof of the structure did not survive, hence the building remains uncovered, with plaster remnants on the original surfaces vulnerable to natural and human damage. The structure is located close to the entry to the village on a flat site that extends over an area of nearly 2710 square meters. The eastern side of the structure faces the street lined with stone houses while the west side and the wide courtyard in the front are across the main road leading to the neighborhood. The courtyard walls surrounding the church from west to south as well as the two openings now filled in are assumed to be the original doors.

Risk assesment and recommendations: The only Armenian church in Germir built in the second half of the 19th century is in large part in ruins with most of its features destroyed. Similar to many surrounding buildings, it is left to neglect and external damage. Its use as dwelling has left most of its original features in poor condition. The church is vulnerable to earthquake and needs urgent structural intervention and protection. The structure should be considered as part of a rehabilitation and restoration project that should pay attantion not to cause any damage to the surviving walls and that can attribute new functions to the church. The area needs to be cleaned out, protected, and marked by a sign. As long as the remaining walls of the structure are kept safe, the building can be reconstructed as a multi-purpose hall or preserved in its current state for touristic purposes. 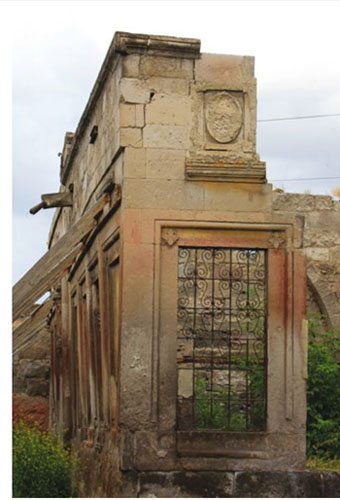 History: According to Alboyajian, in 1826, Hacı Sarkis Agha Gümüşyan (Gümüşzade) renovated and modified a large house owned by Surp Sarkis Church, located in the southwest of the city within a poor neighborhood full of narrow and dirty streets, and converted the house into a school for poor Armenian children living in ‘dışa şar’ (the outer city). The founder also acquired several other stores and property to secure regular income for the school. Being a neighborhood school with poor students in pattens (nalın), the school came to be known as ‘Nalınlı School’. Gümüşyan’s sons Taniel and his younger brother Hovhannes followed their father’s footsteps and immortalized the name Gümüşyan. They bought the houses next to the Kayseri Surp Lusavorich Church in 1868, built the Gümüşyan School, and endowed a fund and some properties as a foundation for the school. During the years when the number of students reached a thousand, two spaces on the upper gallery of the Surp Krikor Lusavorich Church built in 1859 came to serve as classrooms. According to statistics reported by Alboyajian in 1901, Gümüşyan School consisted of a kindergarten, a primary school, and a two-year secondary school in 1859 with 680 tuition-paying students, 250 students on scholarship, and 14 teachers. Following the deportation, the only houses of worship and schools of the Armenian community in Kayseri were Krikor Lusavorich Church, Gümüşyan School, and their adjacent buildings. In 1920, Gümüşyan School started to serve as an orphanage-school only to lose this function in a few years due to a lack of teachers. 300 orphans in the school were then transferred to Cyprus Melkonian School. The deed of trust of the Gümüşyan School is today administered by a committee selected by the Armenian Patriarchate of Istanbul.

Present condition: As the structure is in ruins, it impossible to identify interior architectural elements. The only surviving parts are the west façade rising up to the level of the inscription, a detail of the main gate, and a small fragment of the east façade. It can be assumed that the front façade with the inscription was modified with neoclassical features from the Westernization era. The roof of the structure, its side spaces, and most of the façades completing the structure have almost completely disappeared. As the rest of the structure is destroyed, the single remaining wall is a threat both to its own integrity and its surroundings.

Risk assestment and recommendations: The structure is a testament to the history of Kayseri and the Armenian population. However, it is under a grave risk of collapse and needs urgent protection and restoration in order to survive. The structure is in a condition that would allow restoration to its original form and can serve as a multi-purpose cultural space today. (i.e. museum, library, conference hall). 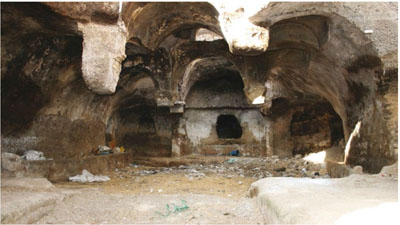 History: No records have been found on the construction date and historical development of the building. Based on its plan, construction technique, and decorative elements, it is assumed that the church was built in the 19th century.

Present Condition: Once used as a stable, the church is currently abandoned. The original plan of the rock-carved structure is intact, but has suffered from human intervention and natural damage over time. All of the interior columns are cut, and the plaster is damaged. Frescoes are almost entirely lost. Colored angel figures on the pendentives and wall-painted motifs on the interior wall of the apse are visible. As it is not close to the main road and surrounded by other structures, the church is difficult to locate without a guide. No sign exists, and the only visitors are those who already know about the structure.

Risk assessment and Recommendations: Due to its structural condition and vulnerability to anthropogenic and natural damage, the church is under risk and unrecognizable from outside. The building is exposed to vandalism in addition to the effects of the wind and rain through the two openings in the roof. With all its columns cut, the structure is vulnerable to earthquake, left neglected, and in bad condition. It needs urgent structural intervention and preservation. Excavations must be carried out in its vicinity to obtain more information about its original levels. The openings on the roof and door must be covered to prevent further damage to the interior. A fine example of a cave church, the structure can be restored to serve faith tourism purposes. It needs cleaning, preservation, and a sign.