2016 Pulitzer Prize for Poetry is granted to “Ozon Journal” by American-Armenian author, scholar and poet Peter Balakian. Turkish readers know Balakian mostly by his non-fiction writings, especially his writings on Armenian Genocide and he became one of the most prominent figures in poetry scene after he is granted with Pulitzer Prize, which is considered as the most prestigious literary prize in the US. Balakian is the second Armenian who is granted with Pulitzer. In 1940, William Saroyan was granted.

Agos readers know you by your non-fiction writings, especially your writings on Armenian Genocide. We spoke about those issues before. Most recently, we published your views about Perinçek-Switzerland case in ECHR. Can you talk about yourself as a poet?

Through I’ve written prose books, my core life as a writer has always been poet. I began writing poems during my college days at Bucknell University in the early 1970s and my first book of poems “Father Fisheye” came out in 1980 and “Ozone Journal” is my seventh book of poems.

My work as a poet has been interested in creating a more open, capacious form for the lyric poem and that has led me to my notion of "horizontal writing" about which I write in my essay by that title in my book of essays “Vise and Shadow”.

In creating a more open form for the lyric poem my interest often has been in the long poem of many sections and multiple sequences. Here the complexity of experience grows out of a kind weave of seemingly disconnected realities that are tied together by unforeseen forces. There is always a persona who is trying to understand the nature of things and the human journey on the planet.  In this more open form, I’ve been able to engage, in my own kind of language, social and political realities: climate change, genocide, AIDS, terrorism, traumatic memory as well as personal and meditative realities—love, death, art, and culture.

In the mid and late 1970s, I began writing poems that dealt with history and traumatic memory and these dealt with the Armenian Genocide past. In these poems I hoped to capture something about my grandmother’s death march experience in Diyarbekir in 1915 and the mass murder of her entire family; she and her two infant daughters were the only survivors. These poems sought to capture aspects of her traumatic aftermath and memory and also some of the protracted ways this aftermath affects the present.  I felt in various ways that the lyric poem could ingest, respond to, and transform dimensions of traumatic history and its aftermath.  These poems such as “The History of Armenia,” “Granny Making Soup,” “The Road to Aleppo,” “For My Grandmother Coming Back” first appeared in literary journals in the U.S. in the late ‘70s and appeared in my second book “Sad Days of Light” (1983).

What would you say about the comments that the Pulitzer Jury made? For your poetry, they said, “Poems that bear witness to the old losses and tragedies that undergird a global age of danger and uncertainty.” Why do you think that the jury granted you with the prize?

As for prizes, well, the judges of prizes pick a winner because they value the kind of literary work in the particular book they pick. It’s about the kind of language and form you make. I’m happy to see that my own kind of poetics has received affirmation in a wider arena.

Can you tell me more about “Ozone Journal”?

In my new book, there is another long poem also called “Ozone Journal,” at the center of the book, and it’s a sequel to the long poem in my previous book, “A Train-Ziggurat Elegy,” from my book Ziggurat. “Ozone Journal” is a 55 section poem that opens with the persona excavating the remains of Armenian genocide survivors in the Syrian desert, and this prompts a long, intense memory of his life in New York City in the 1980s—as the AIDS epidemic and climate change make a context for the persona’s struggles with personal issues. Along the way his pursuit of meaning takes him into conversations with a great jazz and blues producer (based on the George Avakian) whose discussions about Miles Davis are illuminating.

Other poems in the book engage zones of crisis, the complexities of borderlands and diasporan identity, as well as personal realities such as love, loss, and art. Some of these poems explore Native American villages of New Mexico, or the slums of Nairobi, or the Armenian-Turkish borderland in the space between Gyumri and Ani. But poems are always about language and the self’s discovery of any given reality through a particular kind of language music which is the poet’s insignia and life-breath.

When we look at the other Pulitzer winners, we see that all of them dealt with issues like refugee crisis, captive workers and ISIS threat. In today's world, there is too much evil, and on the other hand, there is evil coming from the past. We see that, in your poems, you link the current events to the historical ones. In this sense, how do the Armenian Genocide and current tragedies affect you?

The Middle East remains a complex zone of cultural and political diversity and crisis.  It’s a rich source of civilization and that too fuels some of its problems and intensity today. The Middle East has been shaped by centuries of colonial oppression and the absence of democracy—and one must remember that the Ottoman Empire was a colonial operation—and it colonized the Christians and the Arabs and Kurds and many other cultures of the Middle East for centuries.

Massive human rights crimes occurred in the region during the early twentieth century including genocides of the Armenians, Assyrians, and Greeks in the Ottoman Empire as well as massive dislocations of Arab and Kurdish and other cultures. The borders that were drawn after World War 1 were drawn by the French and British, and they were insensitive to the complexities of the cultures of the region, and this has helped fuel some of the instability of the region ever since.

There are echoes of mass violence and cultural destruction between the early twentieth century and the early twenty-first century. But there are also differences. For example the Isis movement is different from the CUP in Turkey in 1915. But the plight of Christian cultures in the Middle East is on a steady course of dissolution. It started with Ottoman Turkey’s assault on Christian communities and cultures—going back to the massacres of the Greeks on island of Chios in 1819 and through the mass killings and oppression of Christians in the Levant and in Anatolia and Asia Minor throughout the 19th and early 20th centuries.  Today we see the Copts in Egypt and the Christians in Syria and Iraq all under attack and assault. It’s a major human rights tragedy and needs to be dealt with by the international community.

Your are the second Armenian who received a Pulitzer in the field of literature after William Saroyan. What do you want to say about him?

It’s an honor to follow William Saroyan who won the prize in 1940. Saroyan is a unique figure in American literature and in Armenian transnational literature. He put Armenian culture on the map with his fiction in the 1930 and he made an inventive contribution to American and world literature especially with his genre bending lyrical short stories especially from the 1930s and 40s. His work should always be read.

A poem from “Ozone Journal”

The day comes in strips of yellow glass over trees. 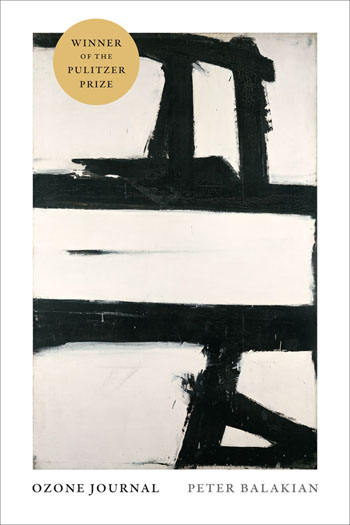 When I tell you the day is a poem

I’m only talking to you and only the sky is listening.

The sky is listening; the sky is as hopeful

as I am walking into the pomegranate seeds

of the wind that whips up the seawall.

If you want the poem to take on everything,

walk into a hackberry tree,

then walk out beyond the seawall.

I’m not far from a room where Van Gogh

was a patient — his head on a pillow hearing

the mistral careen off the seawall,

the sarcophagi. Here and now

the air of the tepidarium kissed my jaw

and pigeons ghosting in the blue loved me

for a second, before the wind

broke branches and guttered into the river.

What questions can I ask you?

How will the sky answer the wind?

The world isn’t full of love.