We talked to Syrian immigrants with different professions about the debate on Turkish citizenship. They all want to acquire Turkish citizenship because it would make their lives easier. However, they don't know whether they comply with the criteria of "being a useful and qualified person", declared by President Erdoğan. They are also disturbed by the hate speech against them.

After President Erdoğan declared that Syrian immigrants might be given Turkish citizenship, Turkey started to discuss this issue. Majority of 5 million Syrians, who have been fleeing from the war in their country since 2011, are in Turkey. According to official figures, there are 2.700.000 Syrians in Turkey and one-tenth of these people lives in camps. Erdoğan said, “There are useful and qualified people among them. Should we let England or Canada take them?” It is estimated that almost 250.000 Syrians will acquire citizenship. While Erdoğan pointed to dual citizenship, Minister of Interior Efkan Ala said, “We will give citizenship to the Syrians whom we deem useful,” and added that the necessary regulations for dual citizenship are in progress.

Reaction from the opposition

On the other hand, opposing parties in the parliament reacted against this move. HDP Spokesperson Ayhan Bilgen said, “This is a demographic planning. They want to place Arabs into the settlements of Alevi people and Sunni Kurdish people. They want to target and trouble them.” CHP Chair Kemal Kılıçdaroğlu stated that the government sees Syrians as potential voters and such a move would increase Turkey's fragility in the face of terrorism and distort the social structure. Some media organs covered these debates with hate speech and some petitions are started to be signed for preventing Syrians from acquiring citizenship.

We talked to Syrian immigrants about this issue. They are working as cooks, teachers, real estate agents and so on. They all want to acquire Turkish citizenship because it would make their lives easier. However, they don't know whether they comply with the criteria of "being a useful and qualified person", declared by President Erdoğan. They are also disturbed by the hate speech against them.

“I don't want to stay here”

Working in a barber shop in Kurtuluş, Diya says that Syrians are constantly talking about this issue. He has been in Turkey over a year. He was engaged when he moved here. He got married in Turkey and his wife is pregnant now. “We heard that they won't accept everyone. They will accept the traders and the ones who have money and house. They will never accept people like me. And I don't want to stay in Turkey anyway.” Diya's boss is Turkish. When we asked him if Diya is qualified, he said: “We are very pleased with him. He works here and it is good for the both sides.” 27-years-old Diya says that there is nothing they can do about the concerns of Turkish people. “There are good and bad people among Syrians and Turks as well. Some Syrians made bad impressions.”

There are other Syrians who are not as pessimistic as Diya. They feel more confident about acquiring citizenship because of their positions or qualities. Şefik Süleyman is one of them. He is the director of a temporary education center for Syrian children. He thinks that this is a wise move of the government and he is thankful: “They will benefit from intelligent, skilled, qualified Syrians by offering citizenship. There is nothing wrong with it. The government doesn't want us to abandon our identity and nationality. I think that this won't be limited with the qualified Syrians; all Syrians will acquire citizenship.”

Two other Syrians, one is working as a real estate agent and the other is working in an NGO, also spoke about this issue: “I want to apply to citizenship because it would make my life easier. It would also make the process of applying for visa to travel other countries easier. I think that I comply with the qualification criterion, since I am a business school graduate. Though I don't support Erdoğan, I support this move of him.” And the other Syrian said: “Syria is where we were born and raised, but unfortunately, it is not convenient for having a good career and leading a good life at the moment. I have been living here for 8 years, I went to a Turkish university and got a degree in mechanical engineering. And I am married to a Turkish citizen. I think that I comply with the conditions of citizenship, because I fitted in here.” On the other hand, they both say that most of the stories about the Syrians shared on social media are not true. They only want to provoke people.

Not a favor, but a right

Working as a cook in a Syrian buffet in Taksim, Enes thinks that he deserves citizenship, not as a favor, but because he is surviving on his own and self-sufficient. According to the customers, he probably cooks the best falafel in Istanbul. Referring to the issue of being “qualified”, Enes says: “I don’t think I’m of any use to them. But if you look at the situation that I am in, I’m not a refugee, I am here, I am paying… making money, spending money, I am not like what you consider a refugee, because a refugee depends on the government’s aid.” 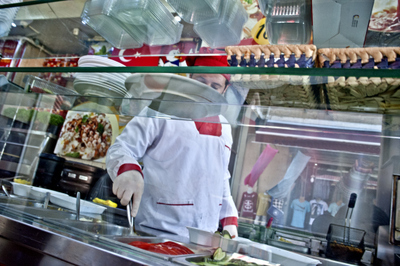 Enes also has dreams. They tried to move to other countries, especially to Canada. So, he has been traveling between the stops. He paid a lot of money to a man who said that he will handle the paper work. He has been to Antep and Ankara. He says, “I am wasting my time, because everywhere I go, they slam the door in my face. They say they don't do anymore registration for immigration.” So, there is no possibility. He says that he is just waiting for something. He has two kids and he thinks that there is no future for them in Turkey. He thinks he doesn’t owe anybody anything and many of the Syrians feel like this: “If we are here, it’s because we are working hard. It’s true you took us, you let us through the border but afterwards you just turned us adrift and we had to stand on our feet.” He also thinks that no Syrian would bother to go and vote for any party, if they get a right to vote.

What is the mistake?

Some of the Syrians we talked to think that President Erdoğan just came up with decision, but he hasn't specified any conditions and it is a mistake. They say that a typical, average Turk would feel disturbed. “For example, they could have said 'You have to stay here for 5 years in order to get it.' All the Turks think that all the Syrians are going to acquire Turkish citizenship, so they’ve started looking at us in a very suspicious way.” Another Syrian says that Turks are thinking like, “Why is this advantageous situation happening to you while I have been born and living here and I don’t even have a house and I don’t even get help with the rent or anything like that? Why do you have this special treatment?” So, they think that Erdoğan's statement caused a tension between Turks and Syrians.