There is a black-and-white picture that keeps haunting my thoughts since I visited the “Bird’s Nest” orphanage-museum early this summer. It is taken probably in the 1920’s on the sands of Antelias beach – north of Beirut - not far from where the Catholicosate of the Great House of Cilicia is located nowadays. There is an adult man standing on the sand, a book in his hands, looking towards the camera. There are some twenty or so boys sitting on the sand, concentrated looking at the books in front of them. Only one is looking towards the camera. There are two boys raising their hands: the face of one of them is visible. He has a pale smile on his face as he looks to his book and waits permission to answer.

Only for this picture it is worth to take the trip to Byblos (Jbeil) in Lebanon. Yet, Bird’s Nest has many more stories to suggest to visitors. This museum, which once served as an orphanage, is located in a traditional Lebanese house on the edge of the old town of Byblos, stretching to the shores of the sea. The building has a beautiful garden in its backyard adorned by generous flowers coloured by the Mediterranean sun.  Since 2015 it is a museum and officially called “Armenian Genocide Orphan’s ‘Aram Bezikian’ Museum”. In the past century it was an orphanage, first used by the “Near East Relief” American humanitarian programme, and later taken over by Maria Jacobsen, who ran it as an orphanage from 1928 until her death in 1960.

“Bird’s Nest”  is worth the effort to visit, as it tells so many incredible stories. It tells you the story of genocide and survival. It starts with the story of the Armenian Genocide, where the Ottoman government under the Committee of Union and Progress, under the shadow of the First World War, took the decision to deport and massacre its Armenian citizens. That story has been told elsewhere, but we know less its consequences.

The boys in that picture are refugees and orphans, and the seaside is their classroom. Their refugee camp was probably nearby. They are genocide survivors. The destruction of the Ottoman Armenians left behind thousands of orphans, estimated at 150’000. Tens of thousands more were left behind, kidnapped by Kurdish tribes or Turkish families, forcibly Islamized. It was the greatest humanitarian disaster of the First World War, and the major focus of humanitarian organizations. A large part of the surviving orphans ended up in what became Soviet Armenia. Others survived in orphanages in Syria, Lebanon, Iraq, Greece, France and elsewhere. Some 40 to 45 thousand orphans ended up in Syria, mainly in Aleppo, while 30 to 35 thousand Armenian orphans were relocated to various orphanages in Lebanon.

The Armenian communities in those countries are largely orphan communities. They were communities that had lost their land, and large part of their material culture such as monasteries, schools, libraries, and archives. They were also orphan communities in a literary sense, as an important segment of those communities had arrived in Syria or Lebanon and orphans. The story of how those orphans constructed prospering communities in a matter of one generation is astonishing: orphanages were replaced by churches, schools, sport clubs and publishing houses. Orphans grew up to become successful craftsmen contributing to the shoe-making industry, photography, jewellery, car repair, printing, and other industries. They became teachers, writers, workers and journalists.

Now, new wars and disasters are emptying those communities once again. First the long war in Lebanon (1975-1990), then the US invasion and occupation of Iraq (2003) dispersed Armenian communities in Baghdad and Mosul, and since 2011 the conflict in Syria is emptying even more of the schools built by that orphaned generation. When I think about the generation of survivors, I am amazed how much they managed to rebuild in spite of their limitless suffering. Now, it is equally amazing to watch how their grandchildren are forced to abandon all that to seek security and stability in the “new world”, even farther away from the land of their ancestors.

There is a third story at this orphanage-museum that is often discarded and even defamed in the various narrations one hears in the Middle East. The stereotypes of European and American missionaries, both in Turkish and Arabic narratives, is that missionaries were imperialists, colonialists, who wanted to subjugate the peoples of the orient, to colonize them, to divide them and caused the fitna. It is they responsible for the inter-communal violence in the 19th century, from the massacre of Assyrians by Kurdish tribes to inter-communal violence in Mount Lebanon, to the repetitive massacre of the Armenians. The dominant historiography in the Middle East tells us that the missionaries caused the split in the Ottoman society that caused the destructive violence. They are “orientalists” who deformed and polluted the Orientals, the dominant story tells us.

Yet, the life of Maria Jacobsen tells a different story. She was a Danish woman trained as a nurse. Early on, when she heard the anti-Armenian massacres during Sultan Abdul Hamid II in 1894-96 she became interested in the plight of the Armenians. She joined the Scandinavian “Woman’s Missionary Workers” which was a novelty at the time, mixing traditional Christian missionary values with progressive feminist assertiveness and independence. In 1907, when she was 25 years old, she left to the Ottoman Empire, and until 1919 she was based in Kharpert (Harput) working at the American hospital, where she witnessed the continuous violence, and later the deportations and massacres. She published her notes on what she had witnessed, titled “Diaries of a Danish Missionary: Harpoot, 1907-1919, one of the valuable accounts on the destruction of the Ottoman Armenians.

In 1922, after spending a few years in Denmark and the US, Jacobsen came to Lebanon to take care of Armenian orphans there. When the “Near East Relief Foundation” decided to close down its operations, Maria Jacobsen single-handedly took over the responsibility of the orphanage in Byblos, that she named “Bird’s Nest”. Here, she took care and educated thousands of orphans until her death in 1960.

The story of Maria Jacobsen tells us a story of extreme good and extreme evil. Her motivations and actions are full of limitless humanity: self-sacrifice for the sake of others. The official propaganda that defames the story of Jacobsen and others did not want them to witness their evil acts: when a government massacres its own people. She was part of a movement that is rooted in Christian missionary past developing to become what we know today as the “humanitarian industry”; yet how different her motivations and dedication was from the humanitarian bureaucracy of our times!

In Bird’s Nest, above the museum, on the third floor, one could see the rooms where Maria Jacobsen once lived and worked. Those rooms are still in ruins, yet to be renovated, remembered, and may be used for humanitarian purposes once again. 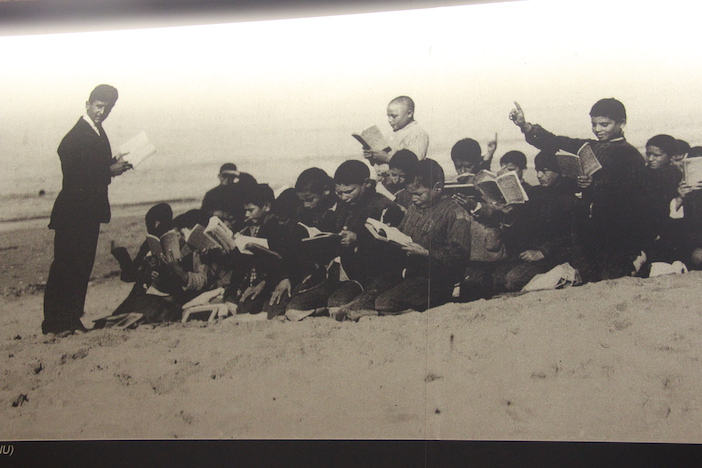