Midhat Pasha played a key role in bringing Abdul Hamid II to power, in the hope of establishing a constitutional monarchy. This was a pyrrhic victory: the sultan first declared the constitution only to suspend it soon after, and send Midhat once again away to the provinces, and later arrest him, exile him to Taif, and have him assassinated in prison.

For many years, as I growing up in Beirut, I “met” daily Midhat Pasha. The street where my parental dwelling was situated was named after him: Midhat Pasha Street. Still, I did not know much about who he was, and even less interested to know. The only thing I knew about the Pasha was that he was an Ottoman dignitary, which caused a deep aversion in me.

I would not blame that young Armenian boy I was for the negative feelings towards the Ottomans: all four of my grandparents were born in the Ottoman Empire – what is now Turkey – and their own state forcibly deported them, dispersing or killing most of their family members. The Ottomans had destroyed large part of my people, and the thought about the past, those dark ages, only caused pain and disgust in me.

Years later it happened that I was researching the history of the 19th century when I “met” Midhat Pasha a second time. This time it was a proper introduction, during which I got to know who he was and what he represented. Soon I would be one of his great fans; I remember telling to a friend that he was my “hero”. If hero he was, he was a tragic one.

It was during those years, as I was continuing my work about the world before the First World War, each time I went back to Beirut I asked my friends whether they knew about Midhat Pasha. Most of my friends in Beirut – journalists, writers, public intellectuals or militants – all had only one answer: no one had any idea who Midhat Pasha was. It was not only me in my early days, the young Armenian, who did not know him, but my friends belonging to the different communities that collectively makes The Lebanon did not know who this Ottoman pasha was, nor what he was doing in the streets of Beirut.

Then, another idea obsessed me: we live with the Ottomans, but we did not know who they were, or what they were doing in our midst. Lebanon had inherited the Ottoman millet system and transformed it to contemporary sectarianism, from which we suffer every single day, yet we had no idea how this calamity had happened to us. I would say this was valid not only to us, the Lebanese, but to all post-Ottoman subjects. “Subjects” as yet post-Ottomans did not succeed to become “citizens”.

If we did not know our past, the path chosen that brought us where we are now, how can we address our problems?

"Father of the Ottoman Constitution"

Of course, Midhat Pasha (1822-1883) is the “father of the Ottoman Constitution of 1876, often referred to simply as the “Midhat Constitution”. This was the culmination of the Ottoman age of Tanzimat – or “reorganization”, the Ottoman version of perestroika - which was a huge attempt to transform an early-modern empire into a modern one, in order to avoid being conquered from the outside, or being torn apart by internal revolutions, such as the Greek Revolution or the challenge by Mohammad Ali, the wali of Egypt. Midhat was the last of the four illustrious Ottoman reformers – Rashid, Ali, and Fouad Pashas, who put the foundations of modern institutions of the Ottoman Empire – from secular and mass education to conscript armies and urban planning.

Unlike the three other reformist pashas, Midhat did not start his career at the Ottoman Foreign Ministry, but rather in provincial administration. In 1861 he was named governor of Nish, in parts of today’s southern Serbia and north-western Bulgaria, and later governor of Danube province (1864-68). In 1869 he was transferred to Baghdad as governor. He served twice as Grand Vizier, the second highest position in the empire after the sultan, first under Abdul Aziz, and later under Abdul Hamid II.

Midhat is also known as “the father of the free and the deposer of sultans”. (1) It was in the year of 1876 – a year when history suddenly accelerates, the “year of three sultans” – when the empire was again endangered, with crop failures following, default on foreign debt, revolts spreading from Herzegovina to Bulgaria, massacres succeeding troop deployment, and European powers threatening with intervention – when a coalition of ministers deposed Abdul Aziz, with the hope of replacing him with the liberal Murad V. This later proved to be psychologically unstable, and after three months power was handed over to Abdul Hamid II.

Midhat Pasha played a key role in bringing Abdul Hamid II to power, in the hope of establishing a constitutional monarchy. This was a pyrrhic victory:  the sultan first declared the constitution only to suspend it soon after, and send Midhat once again away to the provinces, and later arrest him, exile him to Taif, and have him assassinated in prison. The history of Midhat – and the promise of Tanzimat – would come to end.

With the assassination of Midhat the entire history of the Middle East diverged. Instead of Midhat’s universalism, Abdul Hamid replaced it with pan-Islamism (by the way, inspired by contemporary European pan-Germanic movement and pan-Slavism). Instead of the rule of law through a constitution, Abdul Hamid established a police state based on repression and censorship. Abdul Hamid would continue modernization, the creation of centralized state, mass education, and public works. But instead of basing modernization and progress on rule of law, and individual freedoms, it would be based on autocratic rule, which now possessed the dangerous instrument of the modern, powerful state.

The way I discovered Midhat was through Armenian history. The question that interested me was the Armenian National Constitution, or the regulation of the Armenian millet, that the community reached in 1860 and was recognized by the Ottoman authorities in 1863. I was fascinated by the idea that Ottoman Armenians developed their own constitution a decade and a half before the empire developed its own, only to discover that the two were organically linked: Ottoman-Albanian politician and diplomat Ismail Kemal Bey in his memoires writes that the Ottoman reformists, in the aftermath of Crimea War, aimed at developing a constitution for the empire, “they granted to the Armenian Church and community a regime based on the fundamental law which was intended as an experiment in constitutions and was to form a model for later use.” (2) The Armenian millet constitution served as an “experiment” for the more risky enterprise. We find key figures, who played important role in developing the Armenian National Constitution, were also active in the Ottoman Constitutional movement. The most important among them was the long-time friend and collaborator of Midhat, the Armenian lawyer Krikor Odian, who would serve as one of the eight authors who would elaborate the Ottoman Constitution of 1876. Odian was not alone, all four reformist Pashas had close Armenian advisors, and collaborators. The banker that financed Rachid Pasha – and his close friend was Mgrdich Jezeirlian. Fuad Pasha’s banker was the Armenian Ohannes Efendi, and to continue on the Lebanon example, Fuad’s close collaborator the Armenian Catholic Abro Effendi was delegated to Syria in the aftermath of the 1860 civil war to negotiate with local authorities and European powers to find a solution to the crisis, laying the foundations of what became the modern Lebanon. The first governor (mutassarif) of Lebanon is known as Dawood Basah in Arabic (Garabed Artin Davidian in Armenian) another Armenian Catholic Ottoman administrator.

The history of Midhat and the Ottoman reforms, and the Armenian participation in it on such high level, makes the history of anti-Armenian violence more difficult to explain. It makes the Armenian massacres politically conditioned and necessitates historical explanation. What happened so that a community that was so closely associated with the Tanzimat would be seen as a threat under Abdul Hamid? One explanation is the abandonment of the project of building a state based on equality and rule of law, and replacing it with a police state, a project that could not integrate the Armenian demands for reforms. 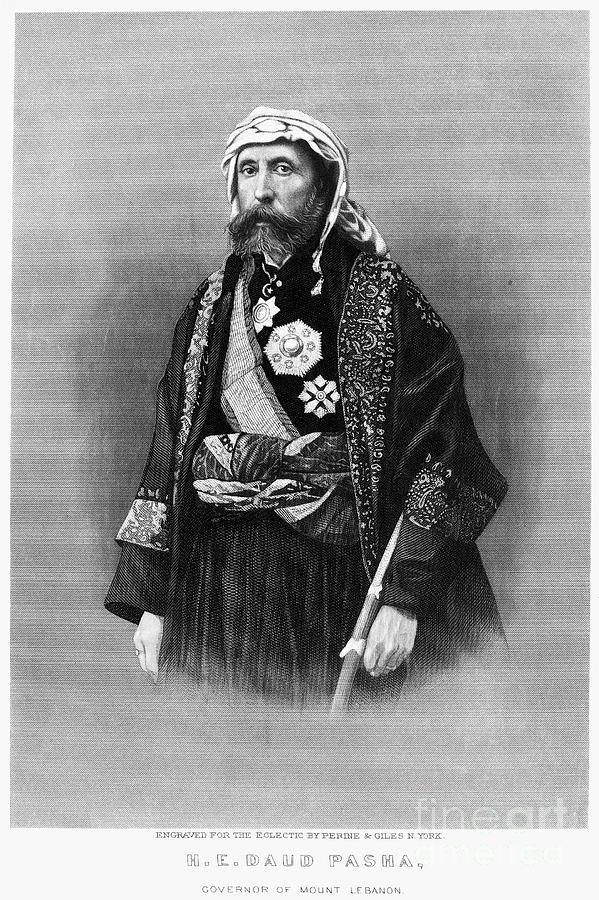 What is Midhat Pasha doing in Beirut?

Before concluding, what is Midhat Pasha doing in Beirut, and why is his name is given to that particular street? In 1878 Abdul Hamid assigned him ruler of Syria, where he served 20 months based in Damascus. In those short years he would leave behind him series of reforms – just like he did in the Balkans and Baghdad – from reinforcing the autonomy of local administration to tax reforms to encouraging education. He was especially tolerant towards the newly emerging Arab intelligentsia, as the affair of “Beirut placards” reveal. For his work, as the last of the Ottoman great reformers, as the force behind the Ottoman Constitution, he is still remembered in Beirut, but also in Damascus, where a street within the Hamidiye Souqs there is Midhat Pasha Souq.

In Beirut too, Midhat lives next to his arch-rival Abdul Hamid: only few meters away, in the centre of the Sanayeh Gardens, there is the Hamidiye water fountain, on which the tughra of Abdul Hamid is clearly visible.

All the peoples of the Middle East continue to suffer from the consequences of the Ottoman collapse, for which the Armenians paid the highest price. The collapse, the violence and the changes were so immense that we are unable to imagine how life was before darkness came. We still live in the midst of the Ottomans, and we still have the choice: between Abdul Hamid and Midhat. For the moment, the winner is Abdul Hamid.