Byzantine Art Historian Dr. Anestis Vasilakeris comments on the timeless messages carried to the present by the narratives depicted in the mosaics and frescoes of the church of Chora Monastery in Istanbul.

Theodore Metochites was probably the most educated man of his time. He was the one who sponsored and supervised the mosaics and frescoes of the church of the Chora Monastery (Kariye). He was a philosopher, mathematician, astronomer, theologian and poet, and, as head of the imperial treasury, a powerful man of state. The images of the church reflect the qualities of his personality. In the early 14th century he was a perfect example of what the Italian Renaissance would later call a homo universalis. As a refined intellectual and an experienced statesman, he was conscious that he was living at the very end of a long distinguished era; the Roman Empire, Byzantium, was about to fall. Through the images on the walls of Kariye, Metochites tried to pass on a visual testament of the civilization he had inherited. When these images were unveiled by Thomas Whittemore in the mid-20th century, humanity discovered with astonishment the most accomplished masterpiece of Byzantine art to have survived.
The Chora was dedicated both to Christ the Saviour (Χριστός Σωτήρ), as the land (chora) of the living, and to Mary, His mother, as the container (chora) of the one who could not be contained (God). In one significant image we see that the artist had to use an abstract method to evoke Mary’s paradoxical pregnancy: Christ is seen blessing and holding the Gospels inside an irregular circle that represents Mary's womb. This meditation on the monastery's name is suggested by the first images that one sees when entering the church from the main gate. Representations of containers fill the space between Christ and Mary, inviting the viewer to reflect on the notion of space and the act of containing. 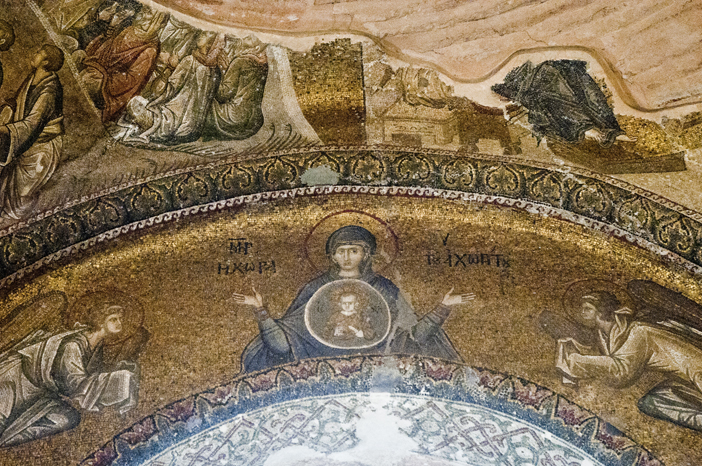 Byzantine humanism
In the main church, in the space that is going to be reconverted into a place of worship for Muslims, Christ is represented holding a scroll with the phrase “come to me you who are tired and troubled and I will give you relief” (Mathew 11:28). The choice of this phrase from the Gospels, instead of the more common text “I am the light of the world”, has been interpreted as one of the many examples of humanism in the monument, which dominated Byzantine religious thinking of the time. God is represented as philanthropos, a good-hearted friend of humanity.
In the northern part of the inner narthex, among the scenes from the childhood of Mary, appears a very tender scene of parenthood. Mary's parents are cuddling their baby, as any parent would do, while a female figure observes. This scene’s title underlines with a paradox this glorification of human nature: “The Cuddling of the Mother of God”. In order to understand this, we need to view this together with the nearby images of the Conception of the Mother of God (the couple hugging), and the Birth of the Mother of God. It was the time when Byzantine theologians were disagreeing with their Latin peers, who had recently come up with the idea of an immaculate conception of Mary. Byzantine theologians, in contrast, argued that Mary was as naturally conceived as any human. She was brought into life by the love of two people. What could be more noble? The idea that a simple human had become the Mother of God was important because it showed that any person had the potential to be worthy of the divine. This is a powerful argument of humanism in Byzantine Christianity, in which the distance between human and God has vanished. 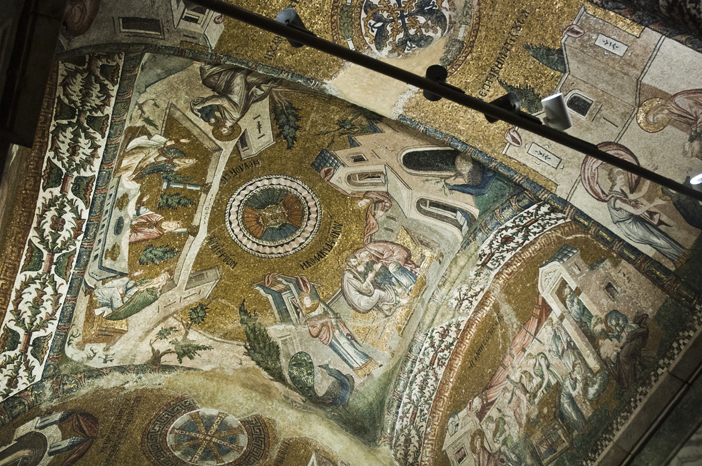 Reference to Hagia Sophia
Over the main entrance that leads to this space, the patron, Theodore Metochites himself, is shown kneeling in front of Christ. It is his only representation in the monument. He is wearing a kaftan, probably a gift from a Muslim ruler, which he proudly displays.
The wall next to this image hosts a monumental representation of Deisis, Mary praying to Christ, her son, for the salvation of humankind. The two previous imperial patrons of the monastery are also shown there, praying. It has been suggested that this image reminds the viewer of the famous Deisis mosaic in the gallery of Saint Sophia – an intertextual relationship that had been purposefully established with the Great Church, and one that could have easily been recognized. The fact that so few Byzantine monuments were preserved in Constantinople makes this image, in which a visual reference shared by its Byzantine inhabitants can be observed, a rare and precious work.
In the frescoes of the funerary chapel that Metochites had arranged to contain his own grave, we do not see the sadness of death, but on the contrary, the victory of everlasting life through salvation; Christ victorious over death, pulls the first humans, Adam and Eve, out of their graves. Light is everywhere. In the scene of the Last Judgment, on the ceiling, an angel rolls up the star-filled sky and with this peaceful gesture removes the dimension of time, which is no longer needed. Human history has come to an end.
The Temptation of Christ is represented in the outer narthex, in a domical vault. The artists of the time liked to show several episodes of an event consecutively. In this lively narration the figure of Christ is repeated in each case, like in a graphic novel. In one image, the devil is showing Christ all the kingdoms of the world and offering Him absolute power over them. Yet, Christ does not give in to the temptation and declines the offer. 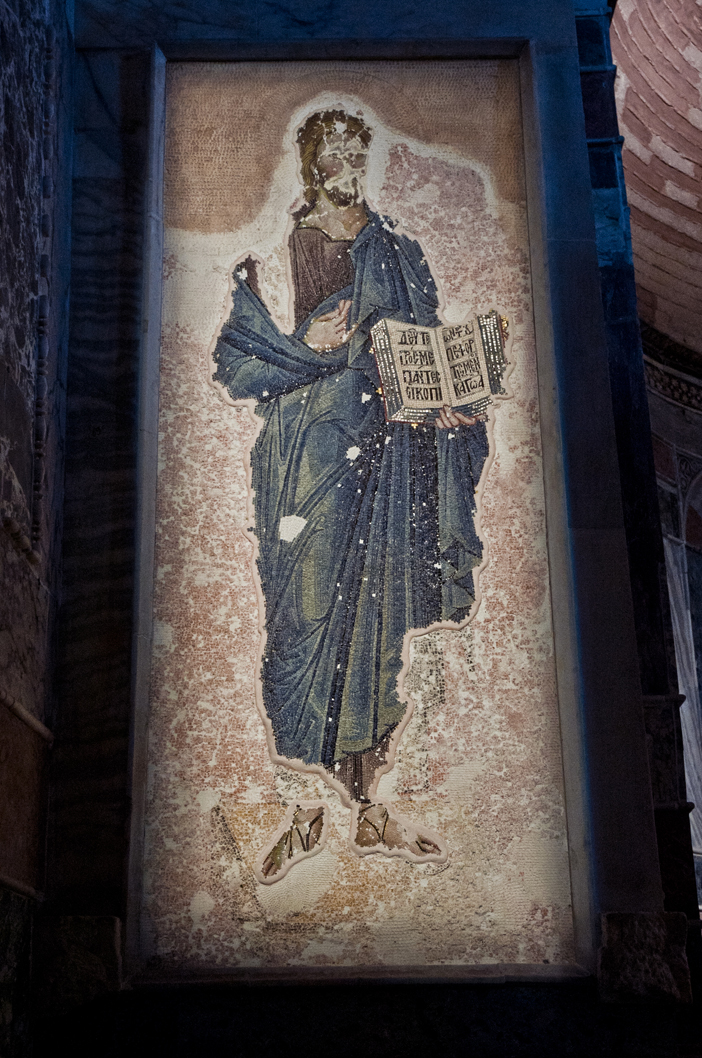 From wisdom to dystopia
Another mosaic in the same space shows a ruler receiving Mary and Joseph for the census. He is a wise ruler; the image reflects the harmony and order that rule over his kingdom. From the same spot one can see at the end of the gallery another ruler, Herod. His insecurity has lead him to order the slaughter of every innocent child of the same age as Christ. Children are being massacred by soldiers, their mothers are crying – a shocking world of disorder and mayhem. He is an unwise ruler, his kingdom is full of violence and pain. These images constitute a powerful, timeless comment on the principles of ruling.
The Chora/Kariye, with its mosaics and frescoes, represents the Land of the living, the ideal space where wisdom and respect bring forward what is most valuable in human nature. This illuminated land also allows the coexistence of humans with the one that cannot be contained, God. Harmony depends on wisdom, on respect and on the unconditional attachment to powerful human values. This is a very great responsibility, for rulers in particular. When they lack these qualities they turn the land into a dystopia where the living are doomed: insecurity, violence and sadness reign. The decision to convert Chora/Kariye into a mosque is certainly a move towards dystopia.
Still, the inhabitants of this city and the peoples of this country deserve wise, civilized and respectful rulers.