Trump and Trumpism have left a trail of wreckage in their departure from Washington, a devastated landscape of racial, social, and ideological division. The Democrats propose unity and healing, more generous social programs, and less racial division, though their ambitious and laudable program is unlikely to win over the fractured but still Trumpist Republicans.

When I began writing this essay, about a week ago, the title had no question mark. But events in the United States have complicated any prediction about the political future.

Donald Trump is history. Well, at least he is out of office and a figure from the dismal recent past. He was a president who believed that America could be great without being good. The new president, Joseph R. Biden, believes the opposite: in order to be truly great, America has to be good, a moral example to the rest of the world, the shining city on the hill. The liberals are back in power, and their vision is certainly superior to that of the Trumpists and the conservatives. Liberalism, with its vision that people in good societies can be potentially improved, is preferable to conservativism, which believes that human nature is deeply flawed and needs to be policed; and conservativism is better than fascism, which is the incorporation of violence into politics, the use of the state to destroy one’s enemies and create an order of superiors and inferiors, is better than…. Oh, no, fascism is the worst; there is nothing that fascism is better than. Even chaos and anarchy have greater potential for improving society than fascism. Fascism is the opposite and enemy of democracy, both liberal bourgeois democracy and socialist democracy. A whole industry of pundits and publicists in the United States has been writing book after book, article after article, warning the public that dangers to democracy, even in stable states, are real, and fascism, or pre-fascism, not only lurks in the shadows but appeared on January 6, 2021, in the nation’s capital. 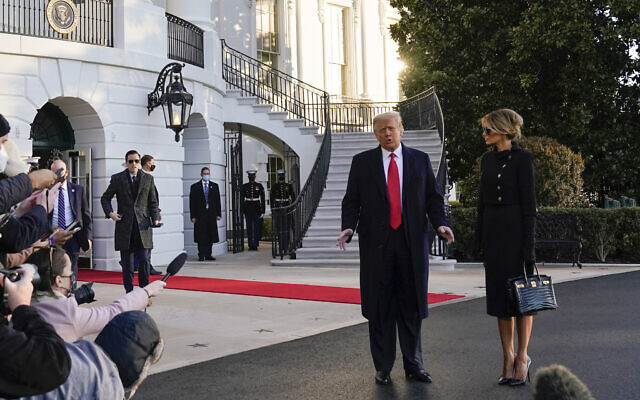 Trump and Trumpism have left a trail of wreckage in their departure from Washington, a devastated landscape of racial, social, and ideological division. The Democrats propose unity and healing, more generous social programs, and less racial division, though their ambitious and laudable program is unlikely to win over the fractured but still Trumpist Republicans. In foreign policy they hope to resurrect the moribund influence of the most powerful state in the world, to convince their allies that their democratic ideals are worth emulating. But in the wake of the disastrous invasions and occupations of Iraq and Afghanistan, are American intentions still considered magically matched to the interests of the rest of the world? Europe now is ready to go its own way, stake out a new autonomy in foreign policy.

At home Trump and his loyal followers screamed that American democracy is rigged, that elections are frauds, and that radical socialist forces are threatening the country. Could it be that the Republican Party, which has become a minority party that increasingly depends for victory on gerrymandering, voter suppression, and lots of donor money pouring into their coffers, is right about the “system”? Perhaps the democratic system in the United States is rigged, but not as they imagine it. The “system” is rigged in favor of the wealthy, the propertied, the privileged, the countryside, Whites, and males. How in a country so economically and racially divided is it possible to have fair, egalitarian elections that represent one person, one vote, with so many obstacles in the way of making informed, rational choices about whom to vote for?

Even though they are a minority in the country, and many of their policies – tax cuts for the rich, deregulations that favor corporations, the end of environmental protections – are unpopular, Republicans are extraordinarily creative in finding ways to maximize their representation in legislatures and even win the presidency with less popular votes than their opponents (as they did in 2000 and 2016). Democracy indeed is fragile and easy to manipulate. Like authoritarian leaders around the world, by suppressing votes or throwing opponents in jail or attacking the mass media, the Republican Party has damaged people’s faith in the only system that guarantees, however inadequately, the power of ordinary people. Minimally, political scientists tell us, democracy depends, not only on access to the ballot box and an informed electorate, but also on a guarantee that those defeated in this round of elections get a chance in the future to run again and win.

“More forcefully than any other politician,” write political scientists Ivan Krastev and Stephen Holmes, “Trump has given voice to the average white voter’s fear of being politically marginalized by demographic and generational change. For these voters, U.S. elections are indeed rigged. … The United States’ elections, Trump’s most fervid supporters feel, are rigged by open borders and low hurdles to the naturalization of people who have entered the country illegally and by making it easier for African-Americans to register and vote, policies introduced by Democrats who are thereby seeking to lock in their future preeminence by reshaping the electorate to their advantage.” (1)

The events of January 6 in Washington have been variously described by pundits and the press as an insurrection, a mob of extremists, even an attempted coup d’état like the one carried out by Lenin in October 1917. But this one failed. The assault on American institutions, it is agreed by most, was so egregious that even a few former Republican supporters of Trump have abandoned him. One might note, even the big bourgeoisie (e.g., the National Association of Manufacturers) has left the sinking ship. The establishment in the United States prefers the usual rules of the game rather than unpredictable gambles based on force and violence. The United States is not in a situation like Italy in 1922 when Mussolini marched on Rome, or 1933 when Hitler dismantled the Weimar Republic. In those cases, powerful forces of the political establishment feared the growing power of socialists and communists and decided to take a gamble on the fascists, thinking they could control them. In America there is no serious threat from a well-organized anti-capitalist Left. The liberals that stand against the Right are neither very radical nor at all revolutionary. They are content with and supportive of the existing institutions of bourgeois democracy and capitalism. Without a threat of a militant Left, the establishment forces of order want business to continue as usual, but now without the disruptive and unpredictable (the euphemism is “unpresidential”) Trump.

It looks as if a corner has been turned. The crazies have been subdued for the moment, though they are still gathering, smoldering in dark places across the breadth of the country. And the Republicans are divided between a few who see a future based on the old conservative values and many more who are ready to recklessly ally with Trump in order to win the votes of his supporters. Right now, more enlightened people have come to power in Washington. But they are also looking in two directions at once: forward into a progressive, more egalitarian future; and backward into the way things were before Trump. President Biden has busily been reversing many of the executive decisions made by his predecessor. Yet, one of the basic problems with moderate centrist liberalism is that it never knows whether to carry on with business as usual and carry out a little reform or placate the beast on the Right – the one that will call any really meaningful change a threat of socialism.

In America right now the only realistic position for radicals is to support democracy, that is, preserve and extend the virtues of liberal democracy in order to transform and transcend it. “Democracy is precious,” President Biden said at his inauguration. “Democracy is fragile. And at this hour, my friends, democracy has prevailed.” Yes, in January 2021, democracy in its damaged and discriminatory form survived, but as the New York Times columnist Ezra Klein, someone who tries to bring the latest insights from academic political science to a wider public, wrote about Biden’s optimism, “It’s a stirring sentiment, but wrong. Democracy barely survived.”:
"If America actually abided by normal democratic principles, Trump would have lost in 2016, after receiving almost three million fewer votes than Hillary Clinton. The American people did not want this presidency, but they got it anyway, and the result was carnage. In 2020, Trump lost by about seven million votes, but if about 40,000 votes had switched in key states, he would have won anyway. The Senate is split 50-50, but the 50 Democrats represent more than 41 million more Americans than the 50 Republicans. This is not a good system."(2)

American democracy is broken; it is no longer truly representative of or responsive to the people except in the most superficial sense. When corporations are considered people and money is equated to speech, those with property and wealth get to speak more loudly than others. But there is outside of the political elite a palpable fervor for change. Some want to go backwards to an America of discrimination and exclusion of those different from oneself. But there are others anxious for something better, more inclusive, better prepared to deal with racism and social inequality. There are young people, black and brown people, students, and even a growing number of socialists who are no longer satisfied to wait for the old guard to carry on as usual. They will bring pressure from below and outside and give the country a healthy alternative to the resentment, fear, and anger that the anti-democrats used to convince the embittered and ignorant to storm the Capitol as the new year began.