We talked to Tevan Poghosyan, an Armenian MP since 2012 and the former Washington representative of Karabakh (between 1997 and 1999), about the sources and possible results of Karabakh crisis between Armenia and Azerbaijan.

For a long time, Armenia-Azerbaijan and Karabakh-Azerbaijan borders are eventful. After Bishkek Protocol, Azerbaijan sometimes violated the ceasefire agreement. Armenia considered these violations as threats and retaliated every time. The clashes have been intensified during last year. However, the intensity of the tension in recent months and size of the weapons used by Azerbaijan reached a more threatening level than before.

We talked to Tevan Poghosyan, an Armenian MP since 2012 and the former Washington representative of Karabakh (between 1997 and 1999), about the sources and possible results of Karabakh crisis between Armenia and Azerbaijan. Poghosyan thinks that international public opinion doesn’t criticize the violations of Azerbaijan enough and Turkey doesn’t set a good example and because of these, Azerbaijan is encouraged. Poghosyan emphasized that the attacks by Azerbaijan have been responded.

The tension is increasing along Armenia and Karabakh’s border with Azerbaijan. Azerbaijan keeps raising the bar; last week, Azerbaijani army opened fire with tanks. Are these the signals of a war or is Azerbaijan trying to convey another message?

The war in Karabakh has never ended. There is a ceasefire, but Azerbaijan has been violating it in different ways since the first day; they were using cannonballs first and now, they are using tanks and mines. Since they don’t gain anything with the attacks, they intensify the attacks and try different ways of attacking. There are even traditional attack dates like December 31, January 6 and April 24… 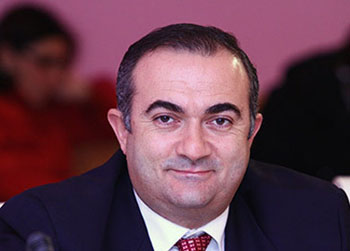 Azerbaijan doesn’t have the chance to solve this problem through diplomatic processes and negotiations and they are aware of this fact. They cannot act in accordance with their wishes. Given this situation, colloquially speaking, they try to “take out their anger on the border”. They insist that not the diplomats, but the soldiers should solve this problem.

What will the tension bring to Azerbaijan? What is Turkey’s position regarding this issue?

Azerbaijan’s economic condition is worsening. Falling gas prices and anti-democratic practices started to challenge Azerbaijan. In the past, Azerbaijani activists and human rights defenders were subjected to violence and put to prison and now, religion and beliefs also became elements of oppression. And Turkey cannot set a good example for Azerbaijan. Turkey increases and incites the tension, let alone being a good example. Turkey is a country that has no neighbors left and does nothing but performing a show of power, making things worse and creating a state of war. In addition, there is the tension between Russia and Turkey. What Turkey does is very simple: they use Azerbaijan in order to change the situation in the region in favor of itself without being directly involved.

Azerbaijani government’s discourse has been hateful for a long time; they made thousands of statements saying that the issue will be solved through military action. They are acting in accordance with these statements and they want to create a crisis.

On this point, I have to repeat my first question: “Are we on the threshold of a war?”

Frankly, Azerbaijan’s attacks have been responded so far. Armenia gives equal responses and will continue to do so. If they open fire, Armenia opens fire too. This might stop their actions for a while, but this is not the ultimate solution.

International authorities should start making clearer and more serious statements against Azerbaijani government. The tension is increasing now, because it is expected that there will be meetings soon. Azerbaijan wants to have a strong hand to use in those meetings and convey the message that they can do whatever they want. They think that, in this way, the outcome of the meetings would be more favorable to them.

What does Armenia try to do?

There is one thing that Armenia should do: preventing Azerbaijan from sitting on the negotiation table with a stronger hand than before. Armenia tries to maintain its powerful position on the table by attempting to solve the problem through diplomacy and this is the right thing to do. Azerbaijan’s use of weapons won’t solve the problem.

What is Armenia’s position regarding the tension between Russia and Turkey?

I think that this tension won’t lead to a war. As long as NATO is there, there is no such a threat, in my opinion. However, they will be economic and political crises. Russia’s impact on Turkey will be asymmetrical. Erdoğan, like Mikheil Saakashvili, is on Putin’s “black list” now; putting the relationship between Turkey and Russia aside, he is a personal enemy now. There is no doubt that Turkey will act in accordance with its own interests, but a political ground for solving this problem will be found. What is important for us is Armenia’s position during this process.

We shouldn’t let anybody use us. We have to keep a level head in order to avoid being used by Russia or Turkey. We shouldn’t trust anyone even if things get complicated and act by thinking our interests. In the end, we have military agreements with Russia and we cannot form good relations with Turkey. However, becoming a side is not reasonable; we have to think of ourselves.