Turkish military launched an operation in Jarablus in order to fight against ISIS there. Around 11.00 am, Turkish Military Forces had entered Syria.

Around 4.00 am this morning, Turkish military launched an operation. It is reported that Turkish Military Forces had entered Syria around 11.00 am.

Syrian Ministry of Foreign Affairs: breach to our sovereignty

Syrian Ministry of Foreign Affairs made a statement about Turkish military's Jarablus operation and stated: “Tanks' crossing our border is considered as breach to our sovereignty.”

Turkish Minister of Foreign Affairs Mevlüt Çavuşoğlu said that YPG fighters in democratic forces must return east of the Euphrates or Turkey would "do what is necessary".

YPG: It is Syrian Democratic Forces' decision to make

After Salih Muslim's statement, YPG spokesperson Redur Xelil also made a comment. Speaking to Reuters, Xelil said that only Syrian Democratic Forces can respond to Turkey's demand of returning east of the Euphrates.

The US: we will support Turkey

After Vice President of the US Joe Biden had arrived at Ankara Airport, an American official made a statement about the operation in Jarablus.

According to Reuters, a senior official stated that the US will "synch up" with Turkey on their plans for Jarablus and provide air cover for supporting this operation which has the purpose of sweeping ISIS. 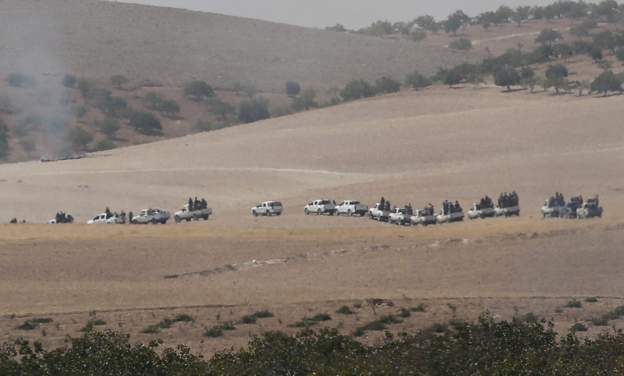 Prime Ministry Directorate General of Press and Information has announced that the operation is led by Turkish military and US-led coalition forces and their purpose is to sweep ISIS from Jarablus.

According to Anadolu News Agency, after artillery and rocket strikes, 12 targets had been hit by airstrikes from Turkish military's jets.

The operation was started by artillery strikes in the morning and the military forces had entered Syria around 11.00 am. Military sources has declared that Turkish tanks rolled into northern Syria.

In Karıkamış, the border town in Antep, tanks are also positioned.

Ala: Turkey will maintain border security

Turkish Minister of Interior Efkan Ala said in a statement: “Turkey has been fighting against terrorism. Yesterday, 9 mortars hit Karkamış town in Antep. Turkey cannot be a mere spectator of these developments. Turkey will maintain its border security. We won't let the terrorist organizations rights beside us threaten our country. Our targets are the ones who carry out terrorist attacks in Turkey.”

Co-Chair of Syrian Democratic Union Party (PYD) Salih Muslim criticized the operation via his Twitter account: “Turkey is in Syrian Quagmire. will be defeated as Daish.”