Agos responded to Archbishop Aram Ateşyan, General Vicar of Armenian Patriarch in Turkey, who is severly criticized by the Armenian society because of his letter addressed to President Erdoğan: "You define the systematic and almost complete annihilation of a people by the decision of the state itself as 'the events happened during the tragic times of World War I'; this is an affront to the ancestors, victims and the survivors in the eyes of the society to which you also belong.”
FOUNDATIONS 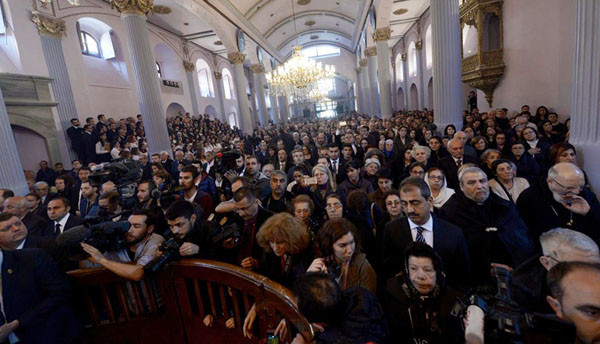 Statement from the Patriarchate: don't believe the unsubstantiated rumors

Armenian society is also nervous about the recent suicide attacks. The Patriarchate made a statement to Agos about the rumors concerning the Easter that will be celebrated on next Sunday.
CHURCHES

Their Eminences spoke: there should be an election now

We talked to the Metropolite of the Diocese of Gougark of the Holy Armenian Apostolic Church Archbishop Sebouh Chouldjian and the Primate of the Diocese of Germany of the Armenian Church Archbishop Karekin Bekdjian about their expectations from the patriarch election. After Mari Mutafyan is assigned as the guardian for the Patriarch Mesrob II Mutafyan, the debate about the elections started all over again.
CHURCHES

The case for assigning a guardian for the Patriarch Mesrob Mutafyan is concluded. On the hearing held on March 8, the court decided Mutafyan's mother Mari Mutafyan to be assigned as the guardian.
CHURCHES

General Vicar of Patriarch Archbishop Aram Ateşyan announced what they are planning to do with the revenue that will be earned through Hovakim 1461 Foundation.
CHURCHES

Historical ceremony in Kayseri Surp Krikor Lusavoriç Church revealed that there are Armenian refugees in Turkish cities other than Yozgat.
MAKING A DIFFERENCE

Born in Sivas, Zara in 1944, Berc Zorian became a prominent figure in amputee football in South America. We talked to him about his life that reached to Mexico and memories of football.
SCHOOLS

Yervand Zoryan, the founder and the director of Armenian Virtual College (AVC), which is sponsored by Armenian General Benevolent Union (AGBU), visited Istanbul.