Secret electronic correspondence related to the ‘Genocide Law’ that was cancelled by the Constitutional Council of France after being accepted by the Parliament of France has been published. The correspondence between former AKP Member of Parliament Yaşar Yakış and member of the Constitutional Council of France Hubert Haenel have fanned the flames about the debate over the activities of the Turkish lobby in France.

Yakış: The wind has changed completely

In the cover story of the monthly’s January issue, the allegedly original texts of a number of exchanges between Yakış and Haenel, also a former senator, were published. In an e-mail dated 1 February 2012 published by the magazine, Yaşar Yakış expresses his satisfaction to Constitutional Council of France member Haenel regarding the collection of the adequate number of signatures for the discussion of the cancellation of the denial law at the Constitutional Council, and says “The wind has changed completely” regarding the appeal. 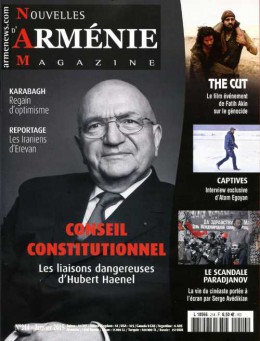 Hanael: You will be satisfied

In his e-mail, Yakış says, “if this appeal results in the cancellation of the law, then it will constitute an opportunity to revitalize relationships between our countries”. Yakış also tells the member of the Constitutional Council who is tasked with the issue; “the file is now in your hands”. A few hours later, Haenel wrote back to Yakış, saying, “My esteemed friend, I, too, am relaxed now. We have 30 days to decide. The dice are cast. I can’t say more. I will let you know”.

According to the magazine, another exchange between the two took place on 28 February 2012, the day on which the Constitutional Council was to declare its decision. In a message sent at 14:23, Haenel tells Yakış that the decision will be announced at 17:00, and says “you will be satisfied with the outcome”. In his response sent at 14:58, Yakış tells Haenel that he is waiting impatiently for the decision, and adds, “Since you say so, I do not think we will be disappointed”.

Call for Haenel to resign

The correspondence has attracted criticism from Armenian institutions in France. However, these institutions have directed their criticism to Hubert Haenel rather than Turkey. The Council for the Coordination of Armenian Organizations (CCAF) published a a statement on the issue, accusing Yakış, who also served as the President of the Turkish-French Friendship group in the Parliament from 2007 to 2011, of “pressurizing a high-ranking member of the French judiciary”.

The CCAF also argued that Haenel’s reassuring comments to Yakış about the denial law, and his notification to him of the hour the decision would be announced was “in violation of the oath taken by officials of the higher judiciary and also the principle of impartiality”. The CCAF demanded that the “higher echelons” of the state initiate an investigation about Haenel, and also called for Haenel to resign from his membership of the Constitutional Council.

Diaspora institutions had previously accused Haenel of “lobbying on Turkey’s behalf” when the denial law had been brought to the Constitutional Council in 2012, leading Haenel to declare that he would not take part in the vote at the Constitutional Council on the law. However, dissatisfied by this declaration, Diaspora institutions have kept Haenel in their sights since. Haenel also served as the President of the French Senate Commission of European Affairs, and is a member of the “scientific committee” of the think-thank Institut du Bosphore, established by the business people from two countries at the initiative of TÜSİAD, the Turkish Industry and Business Association. (DW)