The harvest of the Anatolian travels photographer Norair Chahinian has carried out since 2012 have now been brought together in book form under the title ‘The Power of Emptiness’. Emptiness may be powerful in all its forms, however the emptiness of Anatolia has an added layer of confusion to it: If houses, ruins, mosques converted from churches, people and bones are still there, what is this huge emptiness before our eyes? Or perhaps we should turn our gaze to the last words of the text Baron Sarkis Seropyan wrote for this book: “Today, the Silk Road, Ani, monasteries, churches, and even the houses and rooms lie empty, all over, all across the land… I wonder why.”

Every Armenian child grows up being constantly told, ‘If we don’t speak Armenian, who will?’ The more you learn about the reason of this absurd imposition to speak your mother tongue, the more it becomes an obligation, and as the language is used less each day, a responsibility. To this responsibility, as time goes by, traditions, culture and religion are added, too. To be an Armenian in Turkey means to become a conveyor of culture and language, and it is a heavy burden on identity.

Norair Chahinian came to Turkey from the other side of the world. Since 2012, he has travelled across Anatolia four times. His travels amount to a total of nine months. And now Norair has a book that brings together the photographs he took during his travels; it is called ‘The Power of Emptiness’. When he departs from Istanbul two weeks from now, he will leave behind the countless friends he has made in the last three years, and will take back with him his book, and many interesting stories.

Perhaps a deformation due to being Armenian, it is this ‘burden’ I immediately think of when I browse through the book: “Armenianness lies at the foundation of this project you have been working on for years. I reduce my burden by working for Agos, and you perhaps with these travels… Is that the case?”

Norair tells me that embarking on this trip was a duty he was assigned: “I promised my grandfather when I was 9 years old that I would one day come and visit Maraş. My grandfather never returned to Maraş after he left, and he told me, ‘I won’t have the chance to see Maraş again, but the pain still lingers in my heart, you go there, and talk to people’. He was also the one who taught me photography.”

Norair feels something beyond the happiness of ‘The Power of Emptiness’ being printed, or the excitement of his exhibition opening. I realize that he repeats, at least four times, the following words: “I came here to seek my roots, and to fulfil the duty I was assigned, but I met a new world along the path I set out on for this duty. This meeting gives me more happiness than having fulfilled the duty assigned to me by my grandfather.” Norair’s ‘new world’ becomes all the more meaningful when one considers how Turkey is perceived from the Diaspora. Norair tells me he is the first person to come to Turkey from the 25-thousand strong Brazilian Diaspora: “They are afraid that something will happen to them. And of course, this is a strange country, something could happen to them, but nevertheless…” Before he came here, Norair was told that he could get murdered in Turkey, and even if he wasn’t murdered, that no one would help him, and that there was no one left who spoke Armenian, and no Christians. He, however, thought that was impossible, and travelled to Istanbul. With the address of Agos in his hand, and Baron Sarkis Seropyan’s name…

“Baron Seropyan became my compass” says Norair, as anyone who met Baron Seropyan would say. Yet I am sure that this compass means something entirely different for someone from Brazil, and did not the language, place or the people of this country, and besides, was afraid of all that. When Norair set out to find his family’s home, the first reaction of people was, naturally, that let alone the writing on the wall; it would be impossible for him to find even the house itself. That is why Norair is grateful to those who showed him the path of stones and history, and especially to Baron. “He used to give me directions like this: ‘Go to Bitlis. And from there, to such-and-such village… There are two coffee shops in that small village. Enter the one on the right. Find Ali in the coffee shop, then call me, and pass the phone to Ali.” The way in which Baron knew the village by heart, the close friendship he established with the villagers, and knowing that it was possible to establish such relations with Turks, are part of Norair’s ‘new world’.

A friend of his grandfather

The Armenian family Norair met in Gerger, Adıyaman, are evidence of the struggle for identity the Armenians of Turkey continue to put up not only in Istanbul but also in Anatolia, contradicting what is said in the Diaspora: “The oldest member of the Bakırcıoğlu family was 96 years old, she had witnessed the Genocide. I also met her fourth-generation grandchild. They still live in Anatolia, and they have protected their culture and religion. They have a Bible printed in 1900 in their home. This shows me that the plan to erase Armenians from Anatolia failed, and I draw great strength from that.”

There are a number of very interesting coincidences in Norair’s life that provided direction for him in life. The first was the message left on the wall of his family’s home in Urfa in 1922, with the hope that other family members would find it. Another coincidence is his story with Uncle Hagop (Giragosyan) whom he met in Vakıflı, where he travelled in 2014 to meet Armenians from Kessab: “One side of my mother’s family is from Kessab, while the other side of her family is from the Soğukoluk Village, which is very close to Vakıflı. This is also why I wanted to meet those people. When I got there, people said I should speak to Hagop, who was a photographer. I found out that Hagop had travelled from Kessab to Aleppo in the 1950s and 60s to by photographic materials. The photographer he shopped from in Aleppo was my grandfather. He knew my grandfather. The moment I learned that, I had my grandfather’s camera around my neck… I cannot forget the emotions he showed the moment he learned that the camera belonged to his friend.” Norair adds, “Just imagine: I came all the way from Brazil to Vakıflı. He had left everything behind in Kessab because of the war, and had come to Vakıflı as a refugee with only the key to his house as luggage. And we found each other.” I listen to this story from Norair, so I can tell it later as if it were one of my own. I am overcome by a similar feeling when I look at Norair’s photographs, I wish those moments he has captured with his camera belonged to me… 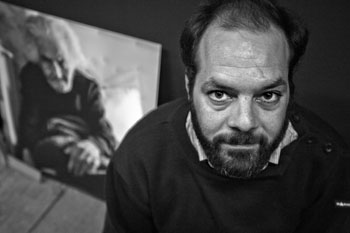 ‘This house belongs to the Der Bedrosyans!’

Norair keeps talking about the good things, and doesn’t mention the difficulties of the trip until I specifically ask him. “Although you came here to ‘heal’, you must have felt anger when you saw your family’s home, the message on the wall, the ruins and the ‘emptiness’” I say, “You bet!” he sighs. He tells me how he sometimes felt like dropping everything and returning to Brazil, and to get away from the whole Genocide issue. “32 members of my family were murdered, only two managed to escape. One of them was my grandfather. Can you imagine what it means to walk around the house they once lived in? Especially when you see a sign on the door, which proclaims, ‘this house belonged to Mustafa Hacı, a wealthy businessman during World War I’… Give me a break. This house belongs to the Der Bedrosyans!”

Norair also tells me that it drove him slightly mad sleeping in that house, so close to that message. Many people have told him that he should file a lawsuit to have the house returned to him, but Norair doesn’t care that much for the property, he has a home in Brazil, so what is he to do with this one? What he does want, on the other hand, is a sign that tells the truth, “that’s probably going to prove even more difficult than having the house returned” he sighs. “In other words, it was also a saddening project. For months, I travelled alone, without speaking the language, and with a fear in me that stemmed from the Diaspora. There were some difficult and saddening moments. But still, something drew me back.” “This was your duty, that must have been why you could not give up,” I suggest, “That’s true,” he replies, and adds, “And of course, there was the possibility of discovering new walls and new stones, and meeting new people.”

I presume his curiosity about stones and walls is related to his profession, Norair is an architect. So what about the people? The conversations Norair had with people he met in Anatolia are highly revealing: “I met many people along the way, we manage to understand each other sometimes with a single word, and sometimes with a single gaze; and assured that we understood each other, we healed each other. In Urfa or Maraş, people looked at me and said, ‘This man is from this land’. Was it because I resembled them in appearance? Or something genetic? They listened with added interest to my story when they learned I had come from Brazil. The conversation naturally turned to 1915, and they could not believe that the Armenians who managed to survive had gone as far as Brazil.”

Thousands of questions would have sprung to the mind of someone who did not know about the past, so the fact that Norair was posed no questions once again points to the same untold stories. Norair also mentions those who apologized from him: “I know that the majority in this country does not apologize, but I was shocked when I met people who recognized the Genocide, and what’s more apologized. I am now long aware that this problem cannot be solved with politics. The voice of the people of Turkey will change the situation.” Once again, from these words, emerges the idea that the solution will come from people who continue to inhabit the emptiness, Norair is sure his photographs will relate much more than a history book that tells lies. He also knows that the message he found on the wall of his family’s home tells a lot to those who want to understand.

I keep the question I should I have asked first until the end: “What is this emptiness?” Norair replies: “Although it is an emptiness borne out of the absence of the Armenians, it is still possible to discern signs that belong to the Armenians, or their presence. On the other hand, this emptiness is also a sign of a failed plan. The plan was to purge Anatolia from Armenians, yet I see that on these lands, there are not only forcibly Islamised Armenians, but also Armenians that protect and sustain their religion and traditions. A wall, or a person may be the emtpiness; or someone seeking his or her history or roots. And this emptiness is not only a sign of sadness and pain, but also of life and hope.”

‘The Power of Emptiness’, the exhibition featuring photographs from Norair Chahinian’s book is at Depo from April 24 to May 31.