Human Rights Watch (HRW), in a statement released yesterday, stated that the Turkish government is blocking access for independent investigations into alleged mass abuses against civilians across southeast Turkey.

In the statement released yesterday, HRW stated that “the government should grant the United Nations Office of the High Commissioner for Human Rights permission to enter the area and investigate according to its standards” and pointed out that the "anti-terrorism law", which prevents the prosecution of the alleged perpetrators of violations of right, should be abolished.

The issues like extra-judicial killings, enforced disappearances, torture, unlawful killings of civilians, mass forced civilian displacement and widespread unlawful destruction of private property are also pointed out in the statement.

HRW Turkey researcher Emma Sinclair-Webb stated that “the Turkish government’s effective blockade of areas of the southeast fuels concerns of a major cover-up,” and added: “The Turkish government should give the UN and nongovernmental groups immediate access to the area to document what’s going on there.”

It is pointed out that more than 355,000 people have been displaced because of the operations that have been going on since August 2015. “In April, the police blocked Human Rights Watch from interviewing families of victims and witnesses to the deaths. The Cizre district governor did not respond to Human Rights Watch requests for a meeting to discuss the events in Cizre and its research findings.” 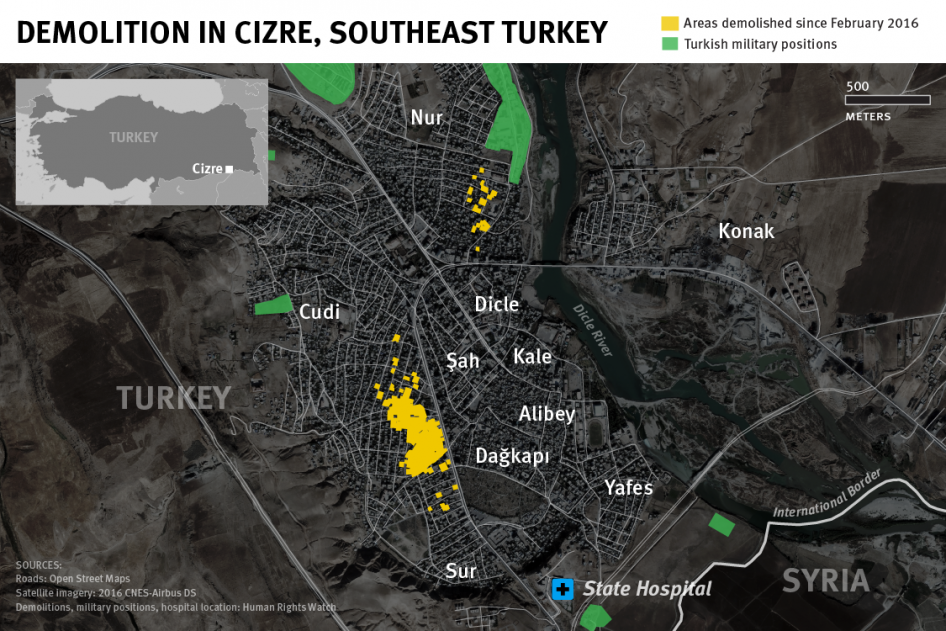 Sinclair-Webb also mentioned anti-terrorism law and impunity. “Concern that blocking the UN and local and international human rights groups from documenting the events in the region indicates efforts to cover up abuses and prevent accountability for serious crimes is compounded by parliament passing a new law on June 23. The law will require pre-authorization from the prime minister’s office or the local district governor’s office (depending on the rank of the implicated soldier or official) to investigate and prosecute soldiers and public officials alleged to have committed crimes in the course of counter-terrorism operations."

Stating that the deaths of an estimated 130 people trapped in three basements in the Cudi and Sur neighborhoods during security operations in Cizre in early February urgently require a full investigation, Sinclair-Webb added: "The circumstances that have emerged to date suggest they could be the result of unlawful killings constituting extrajudicial killings or murder. The seriousness of the potential crime means it should be a priority for investigation by the UN fact-finding mission if it is granted access. Prosecutors should thoroughly and effectively investigate all allegations of abuse by state forces and armed groups, and no legal or extra-legal measures should be taken to try to ensure impunity for personnel responsible for these crimes."

NGOs are not allowed

Pointing out that among the 66 civilians identified as killed, Human Rights Watch documented eight deaths in detail, including those of a 3-month-old baby and two children ages 13 and 11, Sinclair-Webb emphasized that after President Erdoğan criticized the NGOs because of their reports, those organization started to experince more difficulties in the region. “The circumstances, location, and witness accounts all suggest that security forces killed these eight civilians outside of the context of active hostilities. Following the speech, police and local authorities prevented several domestic groups from operating in Cizre. A delegation from the international nongovernmental organization Physicians for Human Rights was not allowed into the town in May and Amnesty International researchers were prevented from visiting in June."

Human Rights Watch carried out research in Cizre in early March and mid-April. Researchers spoke to victims and witnesses, lawyers, and nongovernmental organization representatives. In mid-April, police officers from the Anti-Terror Branch blocked Human Rights Watch from interviewing families of victims in Cizre and said that permission was needed from the Cizre district governor to conduct such interviews. There is no legal basis for requiring official permission for a third party to interview consenting victims or witnesses. Human Rights Watch met with the Cizre prosecutor in April to discuss research findings and to emphasize the obligation to conduct full investigations in all allegations of abuses. In June, Human Rights Watch sought a meeting with the Cizre district governor to share research findings and in order to be able to incorporate the views of the authorities in its report. Human Rights Watch received no response to its request for a meeting.