Lawyer Erkan Metin is contact with the region and following the developments closely. We talked to him about Syriacs' role in the Mosul operation, the current situation and the criticism in the statement of Platform Turbadin (Syriac Intellectuals and Activists Discussion Group).

While the entire world watches the Mosul operation against ISIS, Syriac who had to leave the Mosul after ISIS occupation in 2014, joined the operation with their fighter troops along with Peshmerga forces and Iraqi army. While the Syriac forces had a leading role in liberation of many regions from ISIS, Platform Turabdin consisting of Syriac intellectuals and activists released a statement titled as “Nineveh belongs to the children of Nineveh”, expressing their objections against the discussion about Mosul in Turkey.

The statement points out “the aim to displace all the Christians, especially Assyrian Syriacs, from Middle East” and Peshmerga forces and Iraqi army have failed to protect the Christian minorities in the region. “The ones who created and directed ISIS are objecting the Mosul operation today. They are the ones who wish to execute the project of a region with a single religion and sect. They are the ones who promote the lie that Mosul is a Sunni city. ISIS is a tool of these dark forces promoting this mentality.”

We talked to lawyer Erkan Metin about Syriacs' role in the Mosul operation, the current situation and the criticism in the statement of Platform Turbadin.

Can you talk about Syriac troops joining the Mosul operation?

Local Syriac fighters also joined the operation. Nineveh Plain Protection Unit (NPU) is one of them; it was founded on December 2104, a few month after the ISIS occupation. Politically, they are close to Assyrian Democratic Movement. The other Syriac force is Nineveh Plain Forces (NPF), which was founded in 2015. Politically led by Bethnahrin Democratic Party, they are acting as a local defense forces against ISIS. Both of these groups joined the operation in cooperation with Peshmerga forces and Iraqi army. Furthermore, there are Syriac soldiers working directly in Iraqi army and other smaller Syriac militia forces. These defense units mostly consist of Syriacs from Nineveh. This means that they are fighting from their hearts in order to return to their lands and to save their relatives trapped in Mosul. They are not doing it for the money or anything. This should be why they gain popularity with their courage in the operation.

Are there particular achievements of the Syriacs in the operation?

After the operation was launched, a settlement called Baghdade was liberated. Bartelle is another liberated settlement and the hearing the church bell once again was a historical and emotional moment. Bashiqa is almost completely liberated. Intense clashes continue in Tel Keyf. Batnaya has just been liberated. Karamaliş village is also liberated. The control of Karakuş, which is a Syriac settlement in Iraq, was also gained. 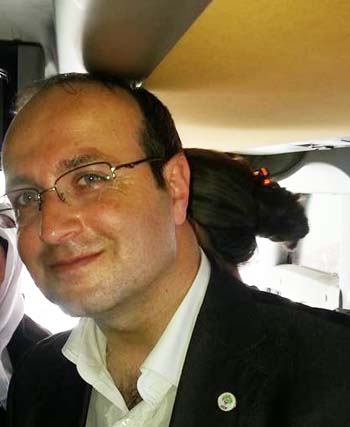 Platfrom Turabdin released a statement. First of all, can you give some information about this platform? Who are the members and what do they want to achieve with this statement?

The platform consists of Syriac intellectuals and activists. In the statement, especially the claim that Mosul is a Sunni city is objected. Also, the statement criticizes the objections against the operation based on sectarian discourse. Nineveh has been known as the homeland of Assyrian-Syriacs for centuries. Our people hadn't left that region even during the Mongol invasions. However, with the invasion of ISIS, almost 200,000 people were forced to leave the region. The migration was so rapid that people had to left old, handicapped and ill people behind. There are reports saying that the old and ill people left in Mosul were put in places like prison by ISIS. We don't know about their current situation. ISIS might use the civilians as human shields or carry out a massacre like they did in Sinjar; this is the hardest part of the operation.

The statement includes serious criticisms against Peshmerga forces and Baghdad government. What do you think about this?

We think that Peshmerga forces handed Mosul over to ISIS like a gift. The accounts from the region are bleak. We are informed that the weapons of our people in the region had been collected right before the occupation. Yazidis told about similar stories; there are a lot of reports about this issue. Iraqi parliament had also issued a similar report. The occupation of Mosul is not the beginning. For instance, in 2007-2008, there had been attacks like massacre against Syriac and Yazidi people. Even then, our people were thinking that there is a plan for evacuating Syriacs from Mosul. It had been observed that Peshmerga forces were a part of this plan.

What about Baghdad government?

Baghdad is an accomplice at least for turning a blind eye to these developments. Think about this: while people had been fighting against ISIS in front lines with heart and soul, Iraqi parliament was passing a law “prohibiting alcoholic drinks”. This amounts to imposition of the Islamic law, exhaustion of economic sources of Christian people, enforcement of a lifestyle; a step for guaranteeing the migration of Christians or the assimilation if they stay. Last year, Iraqi parliament made an amendment in law on population registration: Iraqi citizens cannot convert to another religions if they are Muslim, but a Christians is allowed to convert to Islam. For instance, a child having Christian parents is considered as Muslim, when one of the parents converts to Islam, but not vice versa. It is illegal to convert to Christianity anyway. Such laws openly target the groups with different religious belief and try to make Islam the official religion of the state.

And in the statement, a solution is proposed for the problems of Christians.

Though the Syriac forces are fighting with Iraqi army and Peshmerga forces in the operation, none of us believes that all the problems will be solved once Mosul is liberated. In Iraq, nobody trusts the governments anymore. We think that an autonomous region should be established for our people who will return to their homes after the liberation. This is a necessity not only for Syrics, but also for all minorities like Yazidi, Shabak and Mandaean people. “Nineveh Autonomous Region” that will be formed by the guarantee and protection of UN is the only way for their existence. We also think that a minority committee should be formed by EU in order to control this region. Otherwise, these ancient people will be destroyed in the midst of ethnic and sectarian clashes and plans for changing demographic structure.