Hrant Dink Foundation's Turkey-Armenia fellowship program sponsored by the EU encourages the professionals from the neighboring country to form cross-border cooperation networks since 2014. Armen Ohanyan (Hayastantsi), Maria Yeghiazaryan and Artsrun Pivazyan, who came to neighboring Turkey for new experiences thanks to the fellowship program, shared their experiences.

While Ohanyan, Yeghiazaryan and Pivazyan talk about their exciting projects, we see that another bridge between Turkey and Armenian is being built. Armen Ohanyan started to work in Can Publishing and says, "I have come out of my ashen nest and come to your burning house" Armen Hayastantsi greets the people of Turkey; he found the answer to the question "Where is our home?", which was written in Armenian on a wall in Kurtuluş, in the book titled "The Armenian Within".

"An act of defiance"

Signing his books as Armen Hayastantsi, Armen Ohanyan says that this pen name has nothing to do with nationalism: "I am a writer. I was born in Yerevan. In literary circles, I am known by my pen name Armen Hayastantsi ("Armen of Armenia"). It may sound like a nationalist name at first, but the people who know me and my writing are aware that I have nothing to do with nationalism. I can say that this pen name is like an act of defiance with a tinge of humor. 'Hayastantsi' doesn't refer to a national identity. It only indicates that I live in Armenia and I am an Armenian citizen. I might have been a Yazidi with Armenian citizenship.

I have two published books so far. I started to write after the age of 30; maybe this is why I have only two books. One of them consists of short stories. The second one is the first volume of the “Mommyland” trilogy. It is titled as “Mommyland: Flag”. 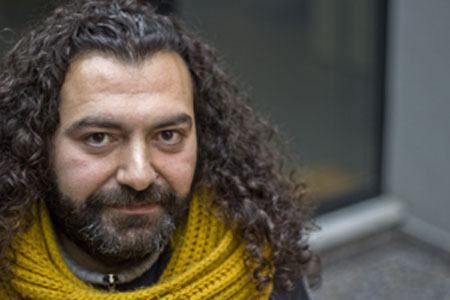 Armen Hayastantsi talks about his years as a teacher in a border village: “I had any job you can imagine before I started writing. I worked as a teacher in Karjevan village in Meghri along the Iranian-Armenian border. I recall those days always with a smile on my face. I was a very beautiful time of my life. I taught different courses. After I studied philosophy, I decided to work in the border region instead of doing military service. This was still an option back then. I have never reconciled with the idea of being ordered. It would be my undoing. So, I headed to the village to work for a year, but spent 7 years there. I spent my time there productively. I was always in touch with people, working with children and learning new things from them. Besides, I can say that I read 80% of the books that I have read so far in the village. I finished the library in the village and then I went on with the libraries in nearby cities. And thanks to those readings, I found the courage to write. I had a lot of things to say.”

Stating that Armenia and Turkey are very similar despite the differences, Armen Hayastantsi says that he was aware of the relations between the two neighboring countries and he doesn't feel like a stranger in Istanbul: “I was an active citizen. I am a former member of the Helsinki Citizens' Assembly (HCA). This experience had great effects on my life. As the Youth Branch of HCA, we started the first summer school between Armenia and Turkey. HCA Vanadzor office took over this project titled “Yavaş-Gamats”. I feel very happy that I was involved in the launch of this project. It was not like I was touched by the idea of Turkey-Armenia normalization and suddenly decided to come to Turkey. This idea, this perception grew in my for years. We have to build peace and normalize the relationships for our future. I don't only talk about political normalization and opening of the border; I mean really rooted and peaceful neighbor relationship. Though Armenia and Turkey are different countries, they are very similar. Maybe this is why I don't like a stranger here. In fact, I can guess the topics of some conversations, even though I don't understand Turkish. The logic of daily life is very similar. It feels like home.”

Armen Hayastantsi says, “Death and writing brought me here. Accepting the death of Hrant Dink is impossible; he is one of us. And writing I am talking about is this book that was created by our joint efforts.” (The book Armen Hayastantsi talks about is “İçimizdeki Ermeni’ (1915-2015)" (The Armenian within) published in Turkey by Can Publishing). "I think it is a really nice book. Contemporary writers of Turkey contributed to this book with their pieces on Armenians. All of them are so sincere. I think literature is an area of sincerity; deceptiveness stands out like a sour thumb in literature. Thinking that this book should be taught in the schools in Armenia, I started to work on this project. A book can be much more valuable than a political speech that doesn't speak to people's hearts."

Stating that this book project will serve as a bridge between Turkey and Armenia, Hayastantsi talks about the details of it: “This is not just a translation project; it will live for many years. I hope that it will constitute a very firm bridge between Armenian and Turkish literature. There are 36 writers from Turkey and I have to find 36 writers from Armenia. I am also one of the contributors. Armenian writers won't be translating the pieces in the book, but they will edit the translations and introduce this work to the Armenian literature. I hope many writers here will go to Armenia and meet Armenian writers.”

Armenian writer talks about Hrant Dink, who is the first reason that brought him to Turkey: “I see the murder of Hrant Dink as a turning point in Armenian-Turkish relations. Armenian people saw a peaceful and hopeful scene from a country that was portrayed as the country of the enemy. Thousands of people gathered together. Some of them were Armenians. Armenian people saw that those people were carrying posters reading 'We are all Hrant' and realized that they had been deceived. For years, we had been told that there is no Armenian left in Turkey. They were always talking about the hatred against Armenians. So, it can be said that I was a revolutionary moment. Today, people in Armenia are curios about Turkey. They want to form closer relationships. Maybe the border will be opened soon. Our peoples should be ready for such developments.” 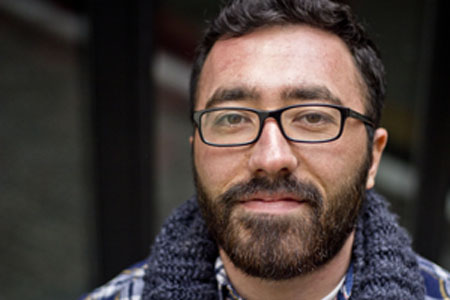 Artsrun Pivazyan has been working at Boğaziçi University Peace Education Application and Research Center for 2 months. Studying on conflicting countries, Pivazyan became interested in this topic while he was doing his military service. Pivazyan talks about his life and his interest in the issues like conflict and peace: “I was born and raised in Yerevan. I am graduated from International Relations Department of European Regional Educational Academy. I did my military service in Karabakh, along the border. After that, I worked in Bucharest as part of Europe Voluntary Service. For 9 months, I carried out works on intercultural peace and conflict resolution with children and young people. Then, I did internship in Rondine center in Italy. We tried to understand peace by living with young people from areas of clash. Those young people were from Azerbaijan, Armenia, Israel, Palestine, Serbia, Kosovo, the US, Sudan, Russia, Chechnya and Georgia. The purpose was to live with 'the enemy'.”

Other side of the border

Artsrun Pivazyan notes that they always get along well with their Azerbaijani friends even during the most tense situations and talks about his experience as a soldier in Karabakh: “My interest in conflicting countries can be traced back to my time in the military. I did my military service in Karabakh. I was able to see what was happening on the Armenian side very clearly and started to wonder what was happening on the other side of the border; the side that they call the enemy. It was out of reach. I started to question many things about us. I had the opportunity to participate in a dialog project between Azerbaijan and Armenia and talked to people from Azerbaijan. We were getting along very well, though the situation along the border was really tense. This indicated that we can understand each other under any circumstance. During the internship in Italy, I was living with the people from Azerbaijan. And even during the conflicts that escalated on last April, we were talking about peace and trying to live together. This was a very important experience. I am conducting a work titled 'Role of memory in the process of peace'. I was examining the similar works. The fellowship program of Hrant Dink Foundation provided me with the opportunity to work in Bogazici University and I learned a lot of things. I am conducting this work at Boğaziçi University Peace Education Application and Research Center. After we complete it, we plan to offer courses.” 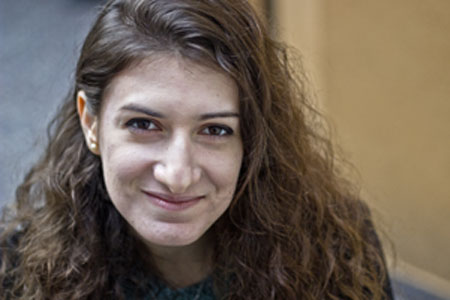 Journalist Maria Yeghiazaryan thinks that journalists have to travel and see their countries from outside: “I worked in Yerevan-based CivilNet for 4 years. I also worked as a volunteer in Marseilles as part of European Voluntary Service. I went to Marseilles for having more experience and see Armenia from outside. We carried out various civil society initiatives: we worked with disabled children and children in prison. Our purpose was to make a movie with children about children. Including children in the shooting process was very important.”

“Not my first time in Istanbul”

Yeghiazaryan wants to learn Turkish in order to understand the Armenian community in Turkey better and to introduce them to the people of Armenia. She says that she is always welcomed in the hosting institutions: “This is not my first time in Istanbul. When I was working in CivilNet, I prepared many programs on Armenian community in Istanbul. Then I grew more interested in Istanbul, Armenian community in Istanbul and the relationship between Turkey and Armenia. When I saw the fellowship program and that there are movie production institutions among the hosts, I wanted to gave a shot. Now, I am learning Turkish. I believe that I will be able to understand the Armenian community here better, after I learn the language. Ret Film and Liman Film accepted my application via Hrant Dink Foundation. I am preparing for festivals and also following the editing process of the movies. Hosting institutions are treating me very well. They try to include me in all projects.”

An opportunity for dialog

Urging people to take action for dialog between the neighboring countries, Maria emphasizes the important of taking action: "Dialog is very important in the normalization process of Armenia and Turkey. Dialog is possible only when people communicate to each other and get to know each other's culture. A couple of years ago, Armenia knew very little about the Armenian community in Turkey. This hasn't changed significantly, but at least there are some developments. Complaining doesn't change anything, we all have to take action. This program enables and strengthens the dialog I am talking about. Many people from Armenia apply for this program despite the current political situation in Turkey and this is a good sign.”