The documentary reveals that beekeepers want to know their neighbors, the border open and move freely like bees. They are sure that exchange of experiences would be helpful for both sides. We listened to the story of “Bees without Borders” and the experiences during making the documentary from director Coşkun Aral, producer Müge Aral and editor Batuhan Tunçer.

“The villagers cannot see their neighbors”

For 45 years, Coşkun Aral has been working in many fields from journalism to photography and in the last 25 years, he shot many documentaries. He says that a news article inspired “Bees without Borders”: “I made documentaries on war, weapons, mines, sharks and bees. I travel a lot in Turkey. One day, I read a short news article and told about it to Müge Aral. It was a strange article: the villagers set their bees free. Bees go to the neighbor and take whatever they need, but the villagers never see their neighbors. When I told it in this way, Müge Aral got an idea. And we created the project.”

Documentary's director Coşkun Aral says that nature provides a perfect and peaceful environment of sharing despite the maps and talks about the message of this documentary on bees: “The relationship between people and their environment, people and their nature, people and the other beings sharing the same nature is very important. Who did determine the borders of these lands? When we read the traces of the history of humanity, nature offers us a perfect and peaceful environment of sharing. The most important part is bees. In spite of everything, we should watch the bees and be happy. We saw it along the border; bees coming with the pollen of the yellow flower from the other side and returning there with the nectar from this side. In the end, they produce the perfect honey. That is exactly why we should mingle.

Some borders are drawn on these lands, separating families and peoples. Some people were sent away and some others were annihilated. And there is the nature resisting this and continuing to set an example to people. This is our message; the ones who are willing to understand would understand it.”

“What is beautiful remains” 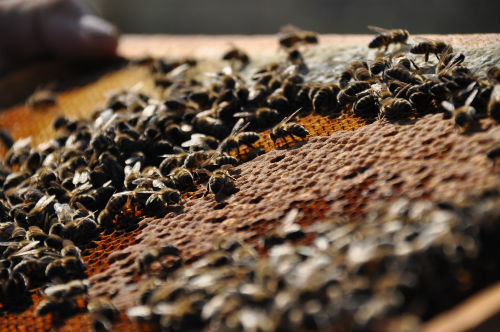 Emphasizing that we should do away with hatred and grudge and be affected by good examples, Aral tells one of his experiences in Paris, to which he went following his dreams at a young age: “We went to Paris in 1977. Suddenly, we realized that we were out of money. We had to pay for the hotel, which was outside Paris. I was the only one who speaks French, so I went to Paris. I had the address of a tailor, which my father gave me. There was a Turkish tourism agency in Champs-Elysees. It was midday. There was a crowd, consisting of ordinary people speaking Turkish. I approached them and asked about the address. They asked, 'Are you Turkish?' I said yes. Then I felt like a lightning hit me. I found myself in a police vehicle. It turned out that Armenian committee was demonstrating. I still remember that beat-up I had on that April 24. Police checked my passport and dropped down the neighborhood. I was hungry; I hadn't eaten anything because I didn't have money. I went to that tailor, but no one was there. Next morning, I was still hungry. I was watching the foods behind the display windows. Someone came outside and said something in French. I said “Hello” and he asked me if I am Turkish. Then he yelled, “Mother, there is someone Turkish.” A woman looking like mother came outside and invited me inside. She brought me food without saying anything. I asked who she is. She said, “I am Armenian.” She gave me 20 francs. I mean, first I was beaten up and then ate the food of that woman. Such things happen. However, what is important is good examples. I never forget the face of that woman, though I don't even remember the person who sent lightnings to me. I don't say that we should forget the history, but what is beautiful remains.”

“It is about time to have peace”

Coşkun Aral says that he didn't have any problems while shooting along Turkish-Armenian border and talks about his experiences: “That region might be the most nationalist region of Turkey. However, everybody says 'The border should be opened.' They say, 'I wish they come here and we have honey together.' I don't know how many queens bees have, but it is about time to have peace so that people can share their lives.” Believing that the fear between two societies would be eliminated once the border is open, Aral says, “I went to Armenia after Leninagan (Gyumri) earthquake. I don't want Armenia to go through such times again. I saw terrible things. Armenia has the capacity to develop. Once the borders are open, two nations, two peoples, two societies would beat fear and hatred.”

“Same bee on the both sides of the border”

Producer of “Bees without Borders” Müge Aral talks about how they developed the documentary project and how they had chosen the villages to shoot: “Coşkun showed me a news article. People from Halıkışlak and Digor village were saying that bees are going to both villages. We liked it a lot and thought about how we can present it visually and make a documentary. We didn't go to those villages, but other villages along the border. Beekeeping is very common in that region. We have been to many places in Turkey. And in Armenia, we went to Meğraşad, which means 'having plenty of honey'. We picked Meğraşad, because it is close to the border and people are engaged in beekeeping there. In Turkey, we went to the villages where people are engaged in beekeeping and found the permanent beekeepers.”

Pointing out that bees are moving only during a certain period and that is why they had to be very planned, Müge Aral says that bees were going to the neighboring country and then coming back to Turkey while they were shooting the documentary: “Bees start to fly during spring. They fly when the temperature is above 15; so, we could have shot only during that period. And time of blossom in Kars is a bit later. For years, we have been working in documentaries about bees. We talked to beekeepers and went to the site. We also contacted to Maria Yeğiazaryan in Armenia and they carried out the shooting in Meğraşad at the same time. And bees were just flying, unaware of us. We might have shot the same bee on different sides.”

“We learn by sharing”

Müge Aral has spent many times in Turkish side of the border and noticed that beekeepers share the same wish: “People work all through the summer and then surrender to winter. In winter, they have neighbors who live like them, but they cannot contact to each other. They want to see each other, since they have the same occupation. Some of the people we talked to said, 'I wish we see each other and talk to each other. This is how this business goes; we learn by sharing.'”

“The border is existent and non-existent at the same time”

Documentary's editor Batuhan Tunçer talks about the border: “Borders are everywhere, including the digital world. Some people try to prevent people from accessing certain things on internet, but other people are breaking these boundaries. So, I think that that understanding of boundlessness will find a way. All the people we talked to during the shooting said the same thing. We didn't name the documentary. We wanted to keep 'bees without borders' as a secret. However, all people said the same thing: 'Bees know no borders. Why are there borders?' This situation preoccupies people and I think they will find a solution to it.”

Also editing the shootings of Maria Yeğiazaryan, Tunçer said that interviews were similar though they hadn't given any directions and the stories of people complete each other: “We just told the story to friends who were going to shoot in Armenia. So, we were trying to find out people's dreams and to show their world. There was no difference between the shootings in Armenia and Turkey. Their narration was the same. On both sides, people are engaged in beekeeping in the same way. The border is existent and non-existent at the same time. Borders are only in our minds. The most important point of the documentary is the fact that both sides want the border open.”