On the 12th anniversary of Hrant Dink's murder, thousands gathered where he was shot. This year's speech was delivered by Filiz Ali, the daughter of Sabahattin Ali who was "lost" in custody in 1948.

At the commemoration held at the spot where Hrant Dink was shot in January 19, 2007, Filiz Ali gave a speech. Ali said the following:

"Dear Hrant,
For the 12th time, we have gathered in front of Agos - the newspaper you founded and nurtured - so that we can stand by you and your family against the darkness that took you away from us. I am reaching out to you today as one of the oldest members of a big family, which had to be formed due to those who made us become neighbours in our shared pain. A family which unfortunately continues to grow every single day.
It was a snowy morning in 1948 when my father Sabahattin Ali had departed from Ankara to Istanbul, after having taken couple of photos of myself and my mother. He never came back. He has gone missing while in detention, and to this very date we still do not know of his whereabouts. Sadly, my father is neither the first nor the last missing person in the history of this country. His murderer said that he killed my father due to ‘having been agitated by nationalistic feelings’. This murderer is no different than the one who killed you and then posed before the flag. Sabahattin Ali remains missing for 70 years. What really happened to my father was persistently left unresolved by all the governments of this country of all times, just like the fact that this government did not uncover your assassination despite having claimed that ‘we will never let the murderers get lost in the deep dark holes of Ankara’…
The horror and fear caused by the brutal killing of Sabahattin Ali, as a well-known and beloved writer, did subside the society into silence; while encouraging those dark forces that consider supressing all forms of opposition as a duty for themselves. Through the military coups that repeated almost every single decade, these so-called dark forces - well in fact some people amongst us - did continue to wipe out the others. With each journalist, writer, artist, scientist being murdered, the society suffered deepening, incurable scars.
Unfortunately, from 1948 to 2007, our large family kept growing bigger and bigger. And they did not bother to slow down after we lost you. The month of January, just by itself, reminds us of dozens of beloved ones. Onat Kutlar, Metin Göktepe, Uğur Mumcu, Muammer Aksoy; they all look upon us from a cold January, they are here with us today as well. Yasemin Cebenoyan watches us from December. In the black frost of February, there comes Abdi İpekçi.
As I have said, my father is a missing person. Since 1995, Saturday Mothers/People keep asking for the whereabouts of my father; of the Armenian intellectuals who were detained in Istanbul on April 24th, 1915 and forcibly put on the trains as well as hundreds of people who have gone missing in Turkey since 70s. These mothers and people did offer the gift of ‘a square of truth’ to the history of Turkey, as they have kept asking for their missing ones for decades regardless of the snow, winter, attacks, detentions. None of the governments in Turkish history did ever respond to their questions, their beloved ones are still missing.
I wish I could give you some good news from the past year, I am afraid I fail to do so.  Writers, cultural figures, politicians, journalists are all in jail; they spent months and years behind bars without any indictment, without knowing the reason why they are jailed. Judgments of the international courts are completely disregarded, the conventions we are a party to are not honoured, people are being deprived of their freedom through a law that is unlawful. As if it was not bad enough that our missing ones are not found and that we are being deprived of a grave, last year, we witnessed attacks to the Saturday Mothers/People while in the square. They are no longer sitting in the square, but they continue to gather in back streets and ask for the whereabouts of their missing ones.
70 years after my father’s enforced disappearing, we have come to such a point of time in history that the society has been fully forced into passiveness, and all sorts of injustice, unlawfulness, murder and horror are inured and normalised. However, there is a truth in this universe, which is just as natural and irrevocable as the rising of the sun each morning. Memory. People’s memory does not forget what is lost, forcibly disappeared, destroyed, burnt out, dismembered of our great assets and values. Our most valuable missing ones would one day appear before the society, at an unexpected place in a totally unexpected way, and they would ask ‘‘have you never felt ashamed of your silence?’’.
Dear Hrant,
Even so, we are not that hopeless. There are those who do not remain silent, we are still here, we do not go anywhere, we do not give up. Those who were only children at the time of your assassination, are here today, together with us. They are going after your murders, asking questions, they do not remain silent. While all of you, all the dignified values and assets that we have lost, are looking upon us in this January frost, we are right here, with a crowd that is getting younger and younger and we continue to cry out that we are not giving up. Hope is right here! This land, this country is ours!" 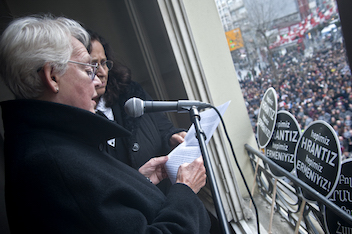