Echo chambers are bad for democracy and public health. This is precisely where the legacy of the late poet and artist Lawrence Ferlinghetti offers hope for Turkey and the world to open up echo chambers and build genuine democracies.

In Turkey, people are born into a giant, suffocating echo chamber. There are countless falsehoods imposed on children and adults as ‘facts’ inside this echo chamber. Many, if not all, grow up, live and die believing at least one of several falsehoods, be it the ‘imagined communities’ of nationalism and jingoism (1), or patriarchy and homophobia, and are unaware of the violent pasts untold and actively hidden.

This is an article on echo chambers. An echo chamber is a social structure “from which other relevant voices have been actively excluded and discredited.” (2).

Echo chambers, and some nation-states, are like a cult membership. Once you are ‘in’ as a member, it is hard to exit. In the case of autocracies, people who recognize something is ‘off’ in stories circulating inside the echo chamber face being ostracized, and their bodily integrity and mental health are endangered. ‘Going mad’ is not uncommon inside echo chambers.

To build a genuine democracy in Turkey, and for the sake of public health, echo chambers ought to be opened up to broader truth(s), and ways of seeing and being.

How do we open up an echo chamber?

We need safe spaces where writers and readers can meet, and democratic debates can take place about any subject matter pertinent to 21st century societies such as the climate crisis, dangers of late capitalism, patriarchy and homophobia, without taboos and fear of persecution.

And this is precisely where the legacy of the late poet and artist Lawrence Ferlinghetti, of the beat generation, offers hope for Turkey and the world to open up echo chambers and build genuine democracies.

Lawrence Ferlinghetti: a builder of spaces for freedom

Some build a university or think tank to cultivate progressive politics and strengthen democracy. Lawrence Ferlinghetti, who passed away at the age of 101 on February 22, 2021 in San Francisco, built a bookstore and independent publisher, taking poetry outside the academic ivory tower and helping to democratize American literature. He defended the right to freedom of expression, and framed poetry as an insurgent art; poetry had to be lived!

Ferlinghetti has been noted as the poetic conscience of America and he continued writing, publishing and producing as a way of being and existing. He published the novel “Little Boy” in 2019, just a few days shy of his 100th birthday. He was born on March 24, 1919.

Over a century-long lifetime, Ferlinghetti experienced many lives - as a poet, painter, publisher, activist, traveler, a friend to many, and a fierce opponent to oppressors of all sorts. He supported the works of writers who were outsiders ― outside of institutional academia and traditional social conventions. 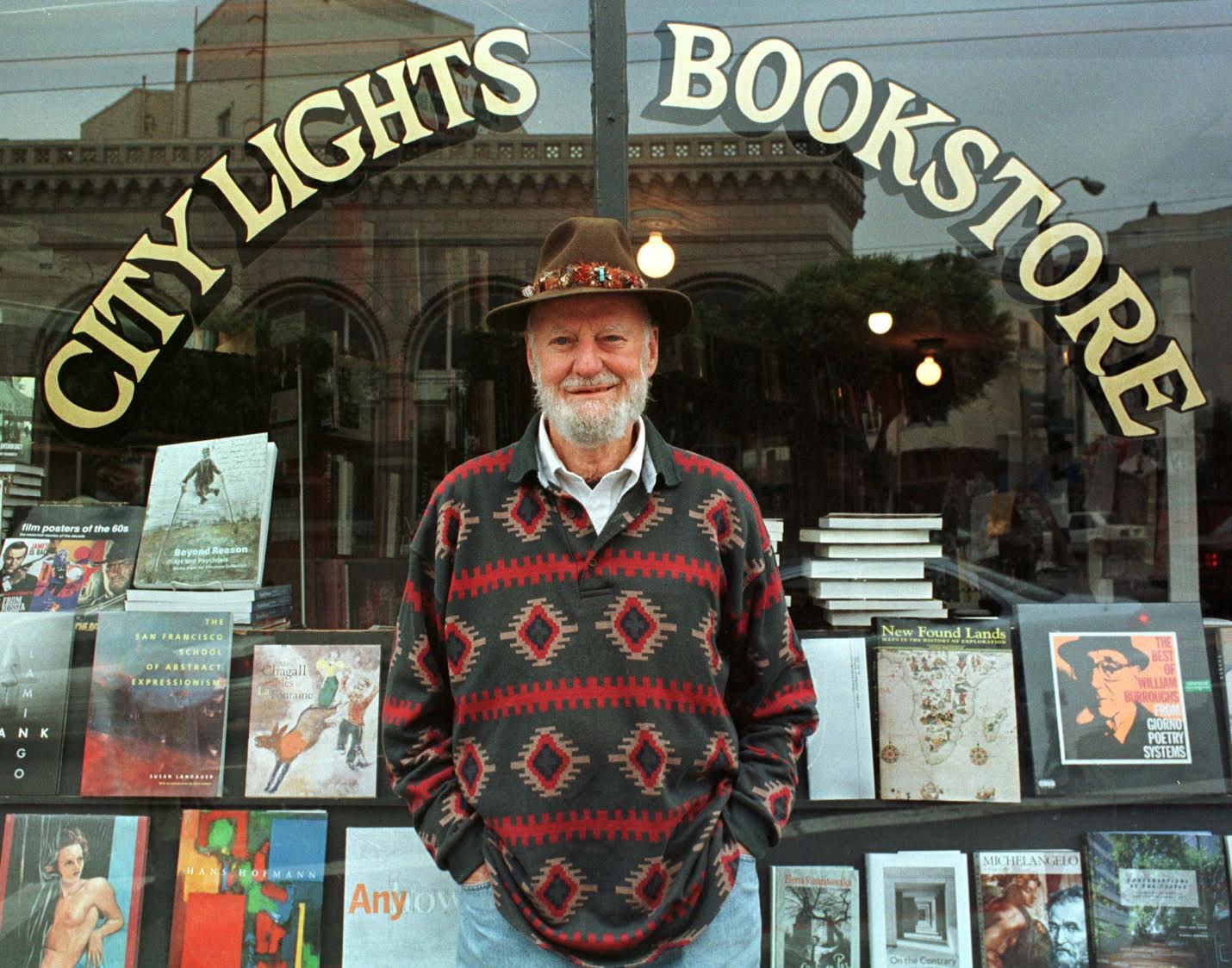 In 1953, Ferlinghetti and Peter D. Martin co-founded the City Lights bookstore in the North Beach neighborhood of San Francisco. Their newly minted bookstore had the foresight to create a democratizing ‘format innovation’. They began publishing poetry and literature in an inexpensive paperback format, making quality books and prodemocracy ideas accessible to many.

Ferlinghetti created safe places and spaces for publics to move from being subjects of regressive change to agents for progressive change. The 1950s was a time, perhaps not so different than the current time, when human rights and democracy were gravely at stake, and the stench of fascism was in the air.

In reference to Allen Ginsberg’s “Howl and Other Poems”, which Ferlinghetti courageously published in 1956, he famously noted, “the world had been waiting for this poem, for this apocalyptic message to be articulated. It was in the air, waiting to be captured in speech. The repressive, conformist, racist, homophobic world of the 1950s cried out for it.” (3).

A decade and half before 1968, Ferlinghetti began to open up the stifling echo chambers of the mid-20th century America. Ferlinghetti’s works foreshadowed the upcoming sea change in world politics in the late 1960s by preparing beforehand cultural and physical infrastructures where prodemocracy publics could flourish.

Without Ferlinghetti’s venerable efforts for building democracy infrastructures, places and spaces, where the right to freedom of expression and progressive radical ideas could flourish, Ginsberg and other icons of the beat generation would have faced greater barriers. Sometimes, a seemingly small effort by an independent progressive bookstore might form a veritable seed for new democracies to come to life.

Time is of essence

We do not have much time left as human societies in a planetary context or in Turkey (4, 5). Climate researchers have been saying that the current decade, 2021-2030, is a critical decade in which we stand a fighting chance to prevent irreversible damages to planetary ecosystems. I argue that this is also the very decade to open up echo chambers filled with the disgusting smell of fascism, to strengthen global democracy, and to stop racism, patriarchy and homophobia in Turkey and around the world once and for all.

Democracy needs new spaces and places for freedom, vigilance for accurate history and recollection of history, speaking truth to power, and dropping notes in history. Ferlinghetti’s legacy speaks to importance of infrastructures such as independent bookstores and publishers as convening places for prodemocracy workers to cultivate actionable ideas and resist global populism and autocracies.

Hope is also about missing the future

Democracy and human rights matter more than ever, as expressed in the works of Ferlinghetti and many others who created spaces for freedom and democracy. In this context, there is a Turkey I miss. But it is neither the old Turkey, nor the current Turkey.  A nostalgia for the future. Can we not miss the future?

Creating brand new spaces and places, independent bookstores and publishers or other forums, as convening places to discuss transformative ideas to build a genuine democracy in Turkey could not be more timely.

In Turkey, the pioneering works of Hrant Dink and the Agos newspaper, now in its 26th year since the publication of its first issue on April 5, 1996, continue to advance democracy and open up the echo chambers. Osman Kavala, independent journalists, writers, and many others have also been courageously opening the gates of echo chambers and making enduring contributions to progressive cultural spaces for civil society, human rights and freedoms in Turkey.

Progressive social change has been accomplished before, and it is possible now as well (6). For this, there is an acute need for prodemocracy constituents in and outside Turkey to work together, and imagine that the end of autocracies, skyrocketing inequality and rampant capitalism is possible.

And a film suggestion

A slice of the spirit of Ferlinghetti’s works in the 1950s is captured in the film “Howl” (2010, https://mubi.com/films/howl) with Andrew Rogers playing Ferlinghetti and James Franco as Ginsberg. Although the film received moderate critical acclaim at the time of its release, it is worth seeing and notable as a provocative blend of documentary, re-enactment and animation, of a time that remains relevant to our age of global populism and the struggle for democracy.

3. Lawrence Ferlinghetti (2006) Howl on Trial: The Battle for Free Expression.

4. Ben Ehrenreich (2021) We’re Hurtling Toward Global Suicide. Why we must do everything differently to ensure the planet’s survival. The New Republic, March 18th.