HDP Co-Chairperson Selahattin Demirtaş has stated that they were well aware of their responsibility and that they would not allow for chaos, tension, insecurity and instability in Turkey.

Demirtaş responded to journalists’ questions at Atatürk Airport, as he was about to leave for Ankara with his wife Başak Demirtaş.

Demirtaş said: “There is one thing we are clear about: We will not be part of a coalition that includes the AKP. Then the question is, what other options exist? We will discuss all of them”.

Demirtaş then added, “We are well aware of our responsibility. We will not allow for chaos, tension, insecurity and instability in Turkey. It is a political tradition to assign the party that came first in the elections with the duty of forming the government. So an AKP-CHP coalition is the first option that must be discussed. The people have expressed their will in electing these two parties as first and second. Let us now observe how the talks progress. Everyone should know that we, as the HDP, are well aware of the duty our people has given us.”

To a journalist’s question, “How will you act if you receive an offer to take part in a coalition?” Demirtaş responded, “We can discuss that once the offer is on the table”.

“The Solution Process shall not end”

HDP Co-Chairpersons Selahattin Demirtaş and Figen Yüksekdağ will arrive today at 1 pm at HDP Headquarters where they will head a HDP Party Assembly meeting in which the election results will be assessed and the party’s strategy for the coming period will be clarified. The HDP Central Executive Committee will then meet at 5 pm tomorrow. 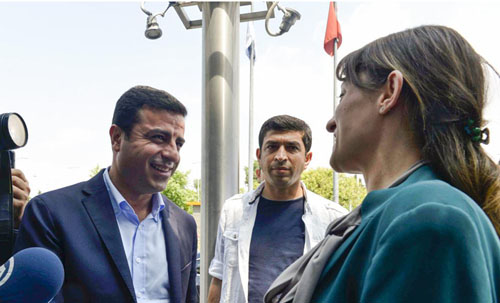 Pavey: I think we gave them a good jolt

Demirtaş also met CHP Deputy Chairperson and Istanbul MP Şafak Pavey, who was also travelling to Ankara, at the VIP Hall. Pavey congratulated Demirtaş and said, “I think, together, we gave them a good jolt,” to which Demirtaş responded, “I hope everything will be better from now on. We will achieve much better results together”.