Nvard Mafaryan, Pink Armenia Project Coordinator, travelled from Armenia to Istanbul to take part in the panel titled “LGBTI Struggle in Neighbouring Armenia” organized on the occasion of the 23rd LGBTI Pride Week, and spoke to AGOS about the LGBTI community in Armenia that is trying to protect its existence against the homophobia of the State and media, and the intersections between the rights’ struggles in Armenia and Turkey. The conversation then inevitably led to the continuing protests in Yerevan.

As the 23rd LGBTI Pride Week continues, Istanbul hosted a guest from Armenia: Nvard Mafaryan, Pink Armenia Project Coordinator, was here to attend a panel on the LGBTI struggle in Armenia, along with Meltem Naz, a researcher on gender and ethnic identity and Karin Karakaşlı, writer, poet and journalist. We met up with Mafaryan before the panel at the French Cultural Centre and talked about the difficulties the LGBTI community faces.

How do you see the protests that begun in Yerevan and have sine spread to other cities?

It is a struggle about a price hike on electricity. Many people have been injured so far, and this is the first time so many peaceful protestors have been detained. It is the first time the police has used water cannons. But despite the police’s savage and brutal attitude, many people continue to protest. The price rise has not been annulled yet, that is why people are still in the streets. Protestors have blocked off the avenue leading to Parliament and the Presidential Palace. In other words, the situation is still ‘electric’, as the ‘Electric Yerevan’ slogan states. What’s interesting for us is that the people are acting with a sense of togetherness. 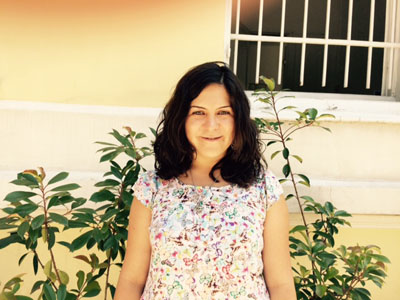 Different groups are not visible in the Yerevan protests

Has Yerevan witnessed police violence on this scale before?

The police was more violent at the protests carried out during the 2008 Presidential elections. But this is the first time the police has attacked peaceful protestors with water cannons, and the first time plainclothes police has detained people. Police violence also targeted journalists and human rights defenders.

It might be problematic to strike parallels between two different countries, but the events in Yerevan remind us of the 2013 Gezi Resistance. An important aspect of Gezi was that it saw social movements that had not united before coming into contact with each other. Can we speak of a similar situation in Yerevan?

There are people from many groups, LGBTI activists, feminists and anarchists at the protests. But there is something missing: During Gezi, everyone had their own zone at the park, and they were there with their flags. But these groups are not visible in Yerevan. In other words, if you don’t know them personally, you wouldn’t know which group they belonged to. Only the anarchists were visible during the first days of the protest; but then there was a big argument, and a decision was taken for only Armenian flags to be present

91% of people in Armenia believe LGBTI rights should be restricted

What are the problems the LGBTI community most frequently faces?

The greatest problem is widespread homophobia. A 2014 survey carried out on proposed reforms to the Constitution of Armenia also included questions regarding gender minorities. According to the survey, 91% of the population thinks LGBTI rights should be restricted. 8% think that their circumstances are good, and only 1% thinks LGBTI people should have more rights. The reasons for this are, undoubtedly, lack of education, the patriarchal structure and widespread prejudices. But the real cause for concern is State-supported homophobia. Members of Parliament often manipulate LGBT problems. My friends currently participating in the Yerevan protests fear that these MPs will manipulate the crowd with false information.

On the other hand, the LGBTI issue is also a source of argument in the preference between the West and East. In 2013, Armenia gave up on the EU-Armenia Partnership Agreement and became a member of the Customs Union led by Russia. This is an economic union, but it is also a social union. We fear that the laws in Russia that violate human rights will also be implemented in Armenia, because we have experienced this in laws such as the ‘Propaganda Law’ and the ‘Spying Law’.

How are the circumstances in everyday life?

LGBTI people have very little visibility in society. People hide their sexual orientation to minimize the problems they face. If you are openly gay, lesbian or trans, you might face harassment, hate crimes or threats in the street. Besides, the most visible members of the LGBTI community, transgender people face physical attacks almost every day – and most of them are sex workers since they have no other option. These attacks cannot be brought to court in a proper manner, because the police file counterclaims. Instead of investigating the perpetrator, the police file charges against you for being a sex worker.

Do you have any data on LGBTI people who flee this repressive atmosphere and move to other countries?

As Pink Armenia, we have carried out a research project on the economic indicators of LGBTI migration. The research showed us that around 5 thousand LGBTI individuals migrated away from Armenia in 2013-2014.

Pink Armenia is the only organization that develops policies in the field of gender struggle. Do you face repression as an organization?

Hate speech spreads fast, especially in the media. We carried out a spontaneous action on the International Day Against Homophobia, Transphobia and Biphobia and shared a photograph. You have to read the comments under it. “Got to burn them”, say some, some call for ISIS to intervene. Repression does not always manifest itself as a physical attack, but LGBTI people are afraid, because the atmosphere of impunity is spreading, and finds support from politicians in the public sphere. It could turn violent at any second, like in the 2012 bar attack.

A similar patriarchal culture exists in both countries

What do you see as the differences and similarities of the LGBTI movements in Turkey and Armenia?

The greatest difference is the fact that LGBTIs are not visible in Armenia. I will attend Pride here on Sunday, but we cannot rally in Armenia.

There are political parties that openly defend LGBTI rights, but that is not the case in Armenia.

As a similarity, one should point out that hate crimes are not recognized in either country. And secondly, LGBTI people living in smaller cities and villages migrate to big cities to live in a relatively freer atmosphere. The greatest similarity, of course, is the patriarchal system. The cultures of both countries feature stereotypes about what a ‘real man’ should be like.