101st anniversary of the Armenian Genocide was commemorated in Istanbul on April 24, which is considered as the beginning of the genocide.

People carried posters, red candles and carnations in the memory of the genocide victims.

The commemoration was held in Tünel Square this year. Police forces took security precautions. Police made a body search to all people coming to the commemoration.

Activists from European Grassroots Antiracist Movement (EGAM) and Armenian General Benevolent Union (AGBU), journalists, writers, academics and lawyers were present at the commemoration. Esra Mungan, who had been under arrest because of the peace declaration she signed and was released on Friday, Rakel Dink, Hosrof Dink, Sevag Balıkçı's parents Ani and Garabet Balıkçı and HDP Istanbul MP Garo Paylan were also in Tünel Square.

In the commemoration ceremony, names of the Armenian intellectuals, who were arrested on April 24, 1915, were read and people carried their pictures.

The press statement of April 24 Genocide Commemoration Committee was read by Emel Kurma.

Reminding that the denialist tradition remains in Turkey, Kurma said, “Armenian Genocide is not a moment of violence that took place in April 24, 1915. We demand this denialist tradition is ended right now. We protect the memory of Armenians and Syriacs.”

Here are the highlights of the press statement:

“April 24, 1915 is a day that cannot be atoned. It had major impacts on 20th century. On April 24, Unionists started their plan of killing hundred of thousands Armenians. It was the beginning of the annihilation of an ancient Anatolian people.”

“Preventing the efforts of recognition and denialism are crime as horrible as the genocide itself.  We demand this denialist tradition is ended right now. State should apologize to Armenians and recognize the genocide. Racism and war policies are not destiny.” 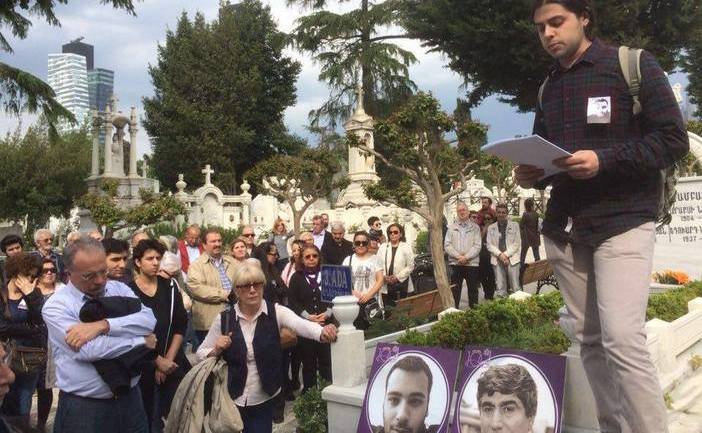 Sevag Balıkçı was commemorated upon his grave

Sevag Balıkçı, who was killed on April 24, 2011 during his military service, was commemorated upon his grave.

Almost 100 people attended the commemoration in Şişli Armenian Cemetery. Nor Zartonk, DurDe (Say Stop to Racism and Nationalism) and Human Rights Association (İHD) were present at the commemoration.

Speaking on behalf of Nor Zartonk, Arno Kalaycı commemorated 220 Armenian intellectuals, who were arrested in 1915, genocide victims, Hrant Dink and Sevag Balıkçı. Defining what happened as a “policy of creating a land without Armenians”, Kalaycı said that Dink and Balıkçı were murdered as part of this policy. 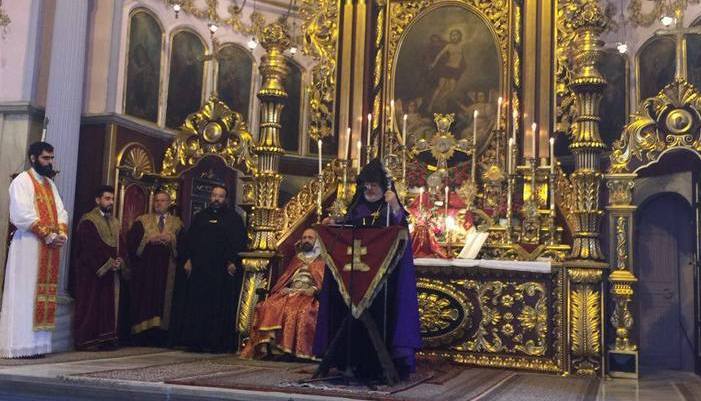 In Badarak mass, people lighted candles and prayed in the memory of the genocide victims.