Killings of Armenian people in Anatolia started in 1890 and reached its peak in 1909 Adana Massacre and 1915 Armenian Genocide. This tragic history is not only recorded by witnesses, but also by the striking caricatures published in the newspapers and humor magazines. On the occasion of 101st anniversary of the genocide, here is a collection of such caricatures selected by caricaturist-artist Vrej Kassouny.

Writer Vartevar Zeytuntsyan
Title:‘Huşer, Mahvan Semen’ (Memories , On the Verge of Death)
Alexander Saroukhan (1898 – 1977): Egyptian-Armenian caricaturist Saroukhan was born in Batumi (Russian Empire). In 1908, his family migrated to İstanbul. He went to Mkhitaryan School as a boarder. During the World War I, Saroukhan was locked in this school with his brother. Only after the war was ended, they were able to go outside. In 1922,  Alexander Saroukhan fled to Belgium. After that, he went to Vienna and studied graphics in ‘Graphic Lehr und Versuchsansalt’. In 1924, he migrated to Egypt and lived there for the rest of his life. Saroukhan was one of the most famous and best caricaturist in the world. His caricatures were published in Arabic and international magazines and newspapers.

Before photography became a part of printed publication and the term of photojournalism wasn't coined yet, there was wood carving publication. Art of wood carving used to function as photography by producing illustrations and caricatures. Thanks to this art and profession, people were kept informed about what is happening around the world, events, disasters and war and also got to know the other continents, countries, nations and cultures.

Like witnesses and historians, illustrators and caricaturists-artists used to transfer the information that they got from the reliable sources through printed publications. In this way, like the orientalists who described their journeys to the east, they enabled people to know more by these original drawings.

During the period when the Ottoman Empire was described as “the sick man”, there were many international publications that published the drawings depicting the annihilation of Armenians, which was planned and carried out during the times of Young Turks and Unionists. Given the opportunities that the mass media have today for popularizing the any kind of news and information, such visual material was very important for that time, since they functioned as documents.

Though the denialists try to explain those caricatures and illustrations by the lobbying of Armenians, there was no “Armenian lobby” when those drawings were published. During those times, genocide survivor Armenians were struggling to stay alive in the deserts of Der Zor. Moreover, “the lobbying” of Armenians started only in the second half of 20th century, when they managed to hold on to life and began to repair the humanitarian, cultural and spiritual losses of their people.

It is also said that these “provocative” drawings were ordered by the governments of those countries for the good of Armenians. However, putting aside the fact that Armenians had no power to direct the powerful western countries like Germany, France and Belgium, those countries were like three monkeys called ‘Mizaru, Kikazaru, Iwazaru’ (Hear no evil, Speak no evil, See no evil) that were carved on “Tōshō-gū” shrine in 17th century Japan.

Memory of the wind

Here, we present you a selection of the works of that media. In the pages of the publications like Punch (England), Simplicissium (Germany), Chicago Daily News (the US), Khatapala (Georgia), there are drawings with the documentary value of Oskar Shmerling, Thomas Theodore Heine, Luther Daniels Bradley, Oliver Herford, Bernard Partridge, Alexander Saroukhan who were known and gained the trust of the readers.

Humanity, before learning to speak and inventing the letters, transferred what is happening around to the next generations through cave painting. The cave paintings that were made forty thousand years ago gave the inkling of the life of old to the humanity. And the truth is hidden in what is express in the drawings that were published in the midst of the tragedy that happened 100 years ago.

They say that the sand has no memory.

What is drawn on the sand disappears with the wind.

However, the wind has memory.

The burning wind of Der Zor desert bear witness to it.

From the cave area to present, lines maintain their characteristic of coding. This is a universal coding method. It is the means of communication that we all understand best. After all, we all tried to express ourselves through lines at first. Let's look for the lines that are hidden, embedded in lines, get to know the objects with their names and underline them. 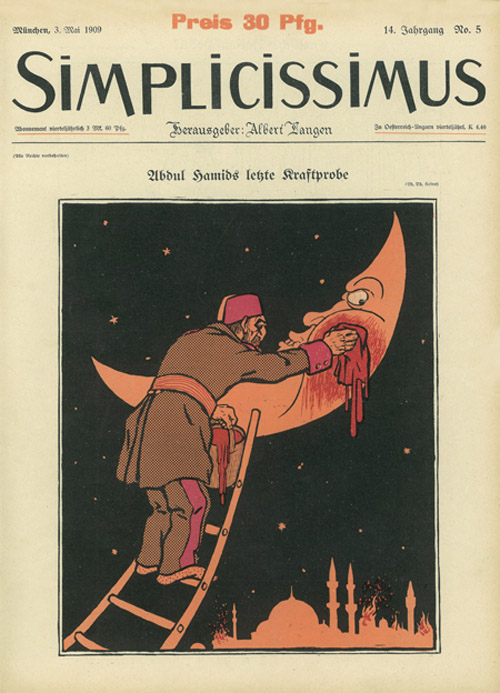 Magazine: Simplicissimus 1909 – Munich
Title: “Last test of Abdulhamid” Artist: Thomas Theodore Heine
Simplicissimus: A German satire magazine that is founded by Albert Langen in 1896. It was published until 1967, with a break between 1944-1954.
Thomas Theodore Heine (1867-1948): German artist and caricaturist. Born in Leipzig, Heine became known as a talented caricaturist at a young age. He studied in fine arts academies in Dusseldorf and Munich. In 1896, he started to work for Simplicissimus. Because of his caricatures criticizing social order and monarchy, he served 6 months in prison in 1898. In 1890s, he started to illustrate books. In 1933, he fled from Germany to Prag. Until his death in 1942, he lived in Stockholm. (From the collection of Armenian Genocide Museum and Institute in Yerevan) 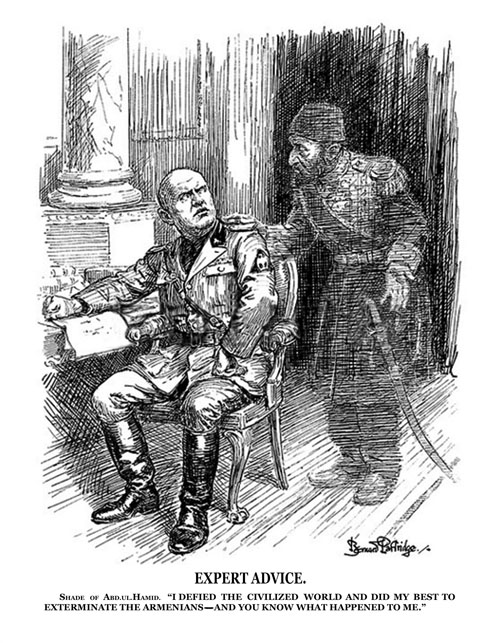 Magazine: Punch 1936 – United Kingdom
Title: “Expert advice” Shade of Abdulhamid: “I defied the civilized world and did my best to exterminate the Armenians – and you know what happened to me.”
Artist: Bernard Partridge
Punch: English humor and satire magazine that was founded by Henry Mayhew and Ebenezer Landells in 1841. 1840s and 1850s were its most influential times; it contributed to the coining of word “cartoon”. After '40s, its circulation was boosted. After years, a period of decline started and the magazine was closed in 1992. Though it was started to be published again in 1996, it was closed in 2002.
Bernard Partridge (1861-1945): He was born in London. He is the son of the Chair of Royal College of Surgeons’ Prof. Richard Partridge and the nephew of John Partridge who made a portrait of Queen Victoria. He gained fame with his book illustrations. In 1891, he started to work for Punch. In 1910, he became the lead caricaturist of the magazine. 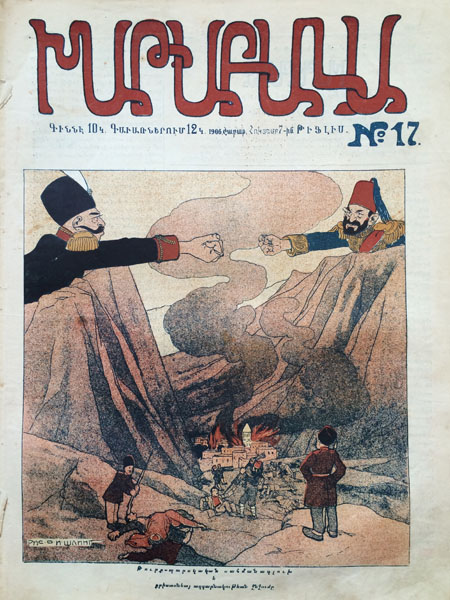 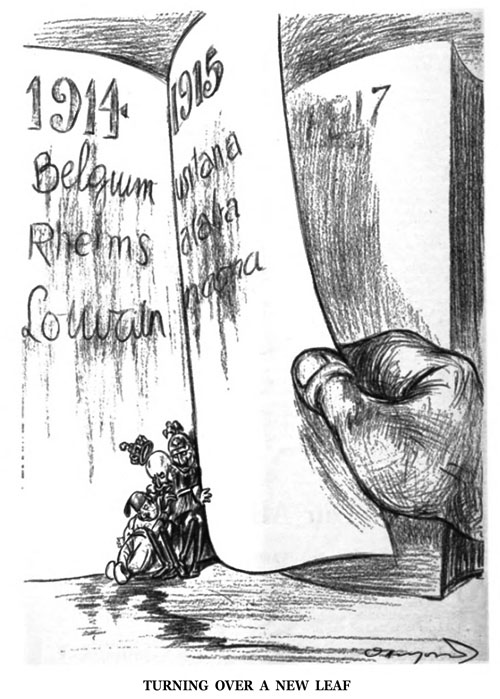 Title: “Turning over a new leaf” 1916
Artist: Oliver Herford
Oliver Herford (1863-1935): American writer, artist, caricaturist. He contributed to “The Mentor”, “Life” and “Ladies' home Journal”. In 1906, he wrote and illustrated “Little Book of Bores. He has short poems. His sister Beatrice Herford was also a humorist. 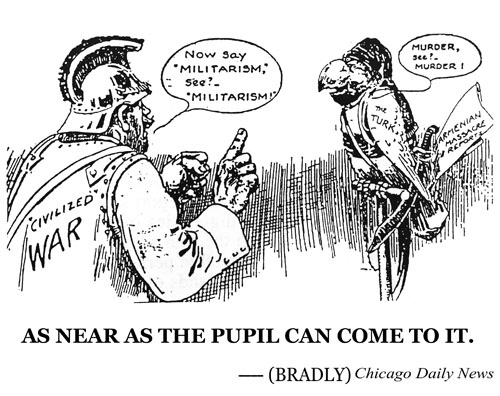 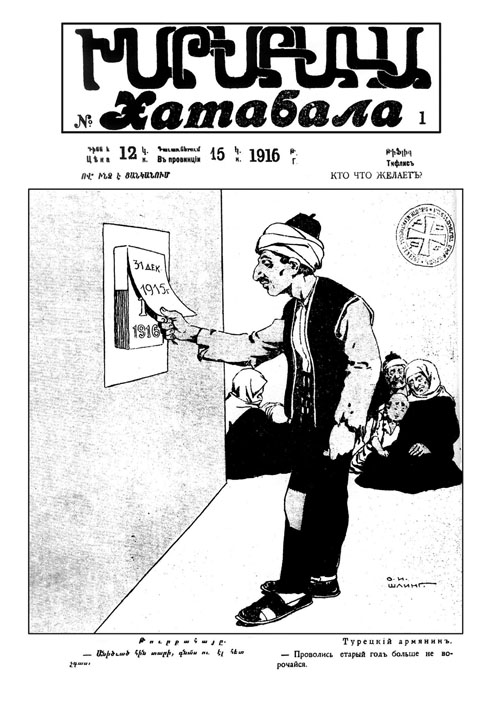 Magazine: Khatapala 1916 – Tbilisi
Title: “Who wants what?” “Anatolian Armenian: the cursed year; may you never come back.”
Artist: Oskar Schmerling
Khatapala: Weekly humor and satire magazine. It was published between 1906-1916, 1922, and 1925-1926 in Tbilisi. Published by Asdvadzadur Yeritsyan and edited by Aşod Atanasyan, Khatapala covered the Armenian massacres by Ottoman Empire. It defended the fellowship of Transcaucasia people. It published stories on international developments and the struggle for freedom of Balkan and eastern peoples. It published jokes and puzzles. It published one in 1922, 5 in 1925 and 2 in 1926. (The information on Khatapala is taken from Zakarya Mildanoğlu's work on Armenian periodicals.)
Oscar Shmerling (1863-1938): He was born in Tbilisi. In 1884-1891, he studied in St. Petersburg Academy of Arts. He went to Munich in 1891 and came back in 1893. Until 1918, he worked as the director of “Academy of Painting and Sculpture” in Tbilisi. Schmerling is the founder of Georgian caricature. Starting from 1901, his caricatures had been published in many newspapers and magazine in Caucasus. He worked with magazines like Khatapala and Tartarus.