Der Mugrdechian studied in the Armenian Studies Program in UCLA after he graduated from Fresno State University. His academic career started in 1985: “For over 30 years, I am teaching in Armenian Studies Program in Fresno State University. There are courses on Armenian language, culture and history. Though the program was launched in 1976, there had been independent courses on Armenian language, culture and history before. I have been working as the director of this program for 8 years now.”

Offering courses on Armenian history and culture, Der Mugrdechian has been focusing on Armenian miniature craft and architecture for a while: “Usually, my courses are on Armenian history and culture, but currently, my courses are focused on two main subjects. One of them is arts. In order to draw attention to the richness of Armenian culture, we are researching Armenian miniature craft and architecture from past to the present. However, literature is my main subject. Armenian writers', American Armenian writers' realization of the genocide. There are many writers who found out about the genocide through the stories of their families. Especially in the recent years, many new and young writers have been writing the stories of their families.

Emphasizing the importance of Fresno for Armenians, Der Mugrdechian states that Armenians had been migrating to the city even before the genocide: “Majority of Armenians migrated to the eastern US at first. This happened both before and after the genocide. Armenians settled into Fresno in 1881 for the first time. After that, they wrote letters to their relatives and acquaintances telling Fresno is a beautiful place and they should go there too. In 1883, a group of 43 migrants came to Fresno. Then, Fresno gradually became an important place for Armenians.”

Pointing out that Fresno had been an important city through 1881 to 1921, Der Mugrdechian says that there were concerts and newspapers in Armenian: “Fresno was the most important city and living space for Armenians until '20s. There were Armenian churches, newspapers and performances of Armenian artists. So, Fresno was a center for American Armenians until '20s. Over years, as Los Angeles and San Francisco were developing, Armenians started to move to those cities. Main reasons for this movement was better education and jobs. Armenian coming to Fresno were mainly engaged in farming. However, second and third generations had changed and started to care about education more.” 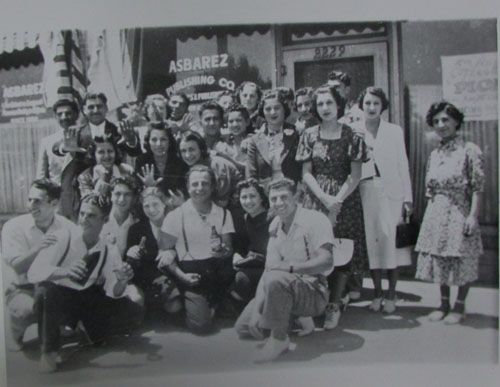 Barlow Der Mugrdechian says that the first Armenian newspaper in Fresno was issued in 1908: “Asbarez newspaper was started to be published in 1908. Starting as a local newspaper, Asbarez became the media organ of Dashnaktsutyun. Asbarez still exists, but it moved to Glendale 50 years after of its foundation, because there are more Armenians living in that city.”

Another old newspaper in Fresno is Nor Or (New Day). Just like Asbarez, Nor Or also started as a local newspaper and then became the media organ of Ramgavar Party: “Moving to Pasadena district later, Nor Or became the newspaper of Ramgavar. These newspapers were mainly publishing stories and reports about the daily life of Armenians in the US, but they were also covering the news from Armenia. Though both newspapers became the media organs of some parties, they still exist. After they moved to other cities, there are no Armenian newspapers left in Fresno.”

Barlow Der Mugrdechian says that they have a newspaper called “Hye Sharzoom”, which is published within Fresno University: “Our students have a newspaper, which has been published since 1979. I was a student, when its first issue was being prepared. Today, it is still issued by students and I help them. We publish 500 copies and distribute it to other countries.”

“My father is from Van”

Going to Van in 2012 for the first time, Barlow Der Mugrdechian talks about his trip: “I went to Van twice, but unfortunately I haven't been in Tokat, which is the homeland of my mother's family. I went to Van in 2012 for the first time. Being there was really interesting for me. My grandfather had been living in the countryside, not at center. Mostly rich people and foreign diplomats were living there. Of course there are no traces of the past anymore. We cannot know exactly where the houses were located.”

Barlow Der Mugrdechian also speaks about the Pulitzer laureate writer William Saroyan's house in Fresno: “A Russian-Armenian philanthropist named Artur Janibekyan bought Saroyan's house in order to turn it into a museum. This idea came from Intellectual Renaissance Foundation, of which Janibekyan is the chair. Auditors from the foundation came to Fresno for holding some meetings. For Americans, turning a house into a museum is not very plausible. Thus, we don't know what will happen or whether people will come to visit the museum once it is open. In Yerevan, Sergei Paradjanov's house was turned into a museum and his belongings, camera and clothes are exhibited there. However, Armenia and the US are different. The US doesn't have such a culture. The foundation is ready to invest money for the restoration of the house. I guess the museum will be open within a year.