In Caux town of Switzerland, Armenian, Kurdish and Turkish participants discussed the Armenian Genocide, their common past, current situation and ways of reconciliation. As part of “Just Governance for Human Security” conference, people from Armenia, Turkey, Lebanon, Spain and Netherlands discussed historical problems among Armenian, Turkish and Kurdish people, and ways for resolving those problems today.

Between July 12 and 18, Armenian, Kurdish and Turkish participants came together in Caux town of Switzerland and discussed the Armenian Genocide, their common past, current situation and ways of reconciliation. Every summer, “Initiative of Change” organizes a series of conferences with 8 sessions. Hundreds of people from all around the world share their experiences and discuss what should be done in order to create a better future. Common ground of the participants is the fact that each of them has been affected by past or current clashes. While the participants dealt with the common past that has been affecting their lives from past to the present, they also had the opportunity to hear the stories of “the other” as first-hand accounts.

Speaking at the session titled as “Just Governance for Human Security”, Turkish-Armenian-Kurdish dialog group drew the attention of the participants from other countries. Armenians, Kurds and Turks from Armenia, Turkey, Lebanon, Spain and Netherlands attended the sessions.

All of the Lebanese Armenians are the grandchildren of genocide survivors. The stories that they have heard from the elders of the family are about once Armenian, now Kurdish cities. As part of this dialogue project, they told about their family stories concerning migration and genocide. Grandchildren of the survivors, who were from Mount Musa, Zeytun and Urfa and founded a new life in Lebanon, Nejteh, Christine and Nora traveled to Mount Musa last year. It was their first visit to their ancestral lands. Nejteh visited Zeytun and Christine climbed Mount Musa, where her ancestors struggled for their lives for 50 days.

“Where is my real home?” 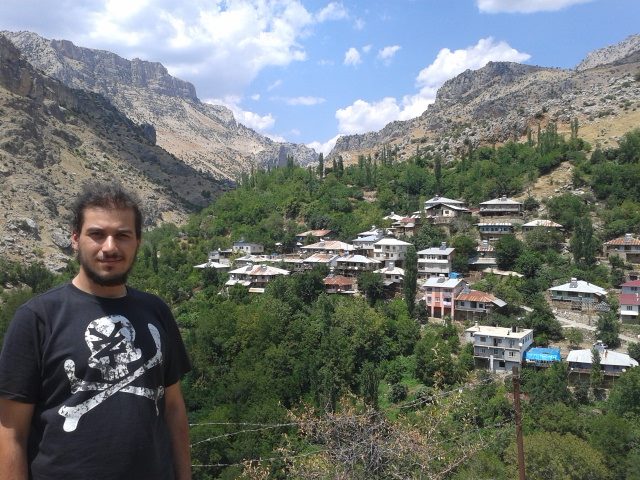 Nejteh said that he had never thought that he will be touched by this trip this much: “I knew about Zeytun only from what I have been told. First, we went to Mersin, then headed to Adıyaman and watched the sunrise in Mount Nemrut. While we were approaching to Zeytun, we began to see high mountains. Though I don't believe in such things, I felt like my land started to talk to me and welcomed me. It makes you surprised. Where is my real home? Is it Bourj Hammoud or Armenia? Or the lands of my ancestors? I haven't been to Armenia, but I wonder if I feel the things that I felt in Zeytun, once I am in Armenia. Zeytun is a hard-to-reach town surrounded by mountains. I felt very touched, when I thought that my family once lived there. I saw a bridge there. Did my relatives cross that bridge, when they were running away from the genocide? Did they drink water from that fountain? Which houses did belong to them? I started to think about such things. That place, which is called Süleymanlı now, is not a very developed town. The villagers are warm just like any other villager; they are hospitable. We started to talk to a villager. I know a few Turkish words. I told him that I am from Lebanon and Armenian. He said, “Welcome to the lands of your ancestors.” After that, I hugged him, crying like a little child. The children in the village held my hand and took me to the foundation for washing my face. Ironically, I was feeling a bit bashful. All the villagers know that Armenians had been living there once. Some says, “One day, they just went away,” and some others say, “Something happened and then they left.” Some believes that German and English people drove a wedge between Armenians and Turks and Armenians left because of this; this was the strangest story. However, I don't blame those people. How could they learn about the truth? They believe in what they are told...” 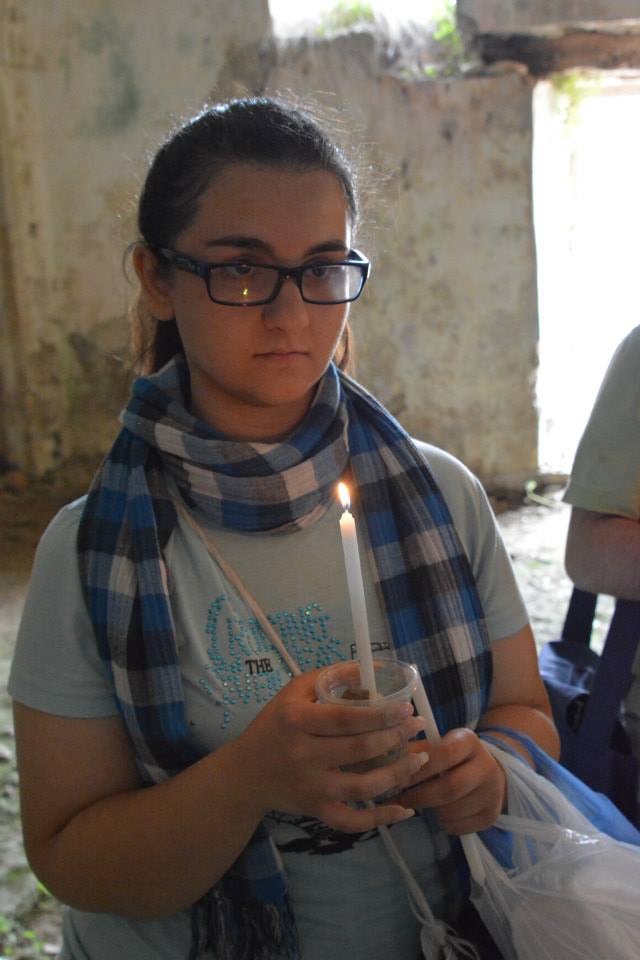 Holding Turks in high esteem and feeling hopeful about the Turkish-Armenian-Kurdish normalization process despite the troubled past, Christine told about her travel to Mount Musa: “My family is from Bitias village of Mount Musa. They escaped from 1915 genocide and returned to their village. In 1939, they had to flee once again. My grandmother is still alive and tells about the stories of our family. When I climbed Mount Musa, I realized that I feel like I am belong there. There was something different. We went to Vakıflı, the only surviving Armenian village today. There was a mass in the church. After all of the sufferings of the past, these people still live and pray there. I burst into tears when I was in the church; I cried like a child.

Most of the villagers know that their houses had belong to Armenians once. In Yoğunoluk village, we saw that they built a mosque where there was a church once. They converted the church into a mosque without demolishing it. I believe that they did this in order to continue to use it as a holy place. I wondered if there is any Armenians left. When I asked about this, I found out that there is someone named Hagop living in Bitias village. I found him. He lives there with his wife and son. He told that his father had fled to Egypt during the genocide and then returned to Bitias. His father risked his life by returning, but he managed to survive. I hope we will revisit the village next year, I want to see Hagop again.

Christine doesn't like to talk about the unpleasant experiences that she went through during her visit to Mount Musa. However, Nora told that she got really scared during the travel. She was looking at Turkish and Kurdish participants while she was talking about this; it was obvious that she was hesitating to tell. When insisted, Christine started to talk about her experience. During the travel, they started to talk to a local man in the hotel. Another Lebanese Armenian asked Christine's help in order to be able to talk to that man. Christine started to interpret. “ Both of them were nationalists. I didn't want to interpret some of things they said, because I was afraid that they might start a fight. They talked about history. When they were saying goodbye, Hagop said, 'Yes, my ancestors' home are here and we will take them back one day.' I interpreted this remark and other man got furious and threatened us to death. We went back to our rooms in order to avoid a scene. A few minutes later, we heard gunshots. That man came to the hotel, intending to kill us. Though I knew that he won't do it, I got scared.”

Artak is from Spain. Artak's ancestors were from Bitlis, Kars and Muş and they founded their new life in Spain. After he heard his friends' stories about their visit to Mount Musa, he told that he hasn't been to Mount Musa before and he is not ready to do such a thing: “I think that I cannot take it.”

In the conference, an emphasis was placed on the issue of migration. Stories of Kurdish and Turkish participants of the dialogue project are also stories about migration. Bedel is a Kurd from Midyat, but he lives in Netherlands. His family had to leave Midyat because of oppression and moved to Istanbul. Then, they migrated to Netherlands because of the political oppression that they had been subjected in Istanbul. Tayfun also came from Netherlands, but his family is from Ankara. He said that his family has strong prejudice against Kurdish and Armenian people. His master's thesis is about the Armenian Genocide, but he said that he had to start from his own denialism, when he began to write his thesis: “I started to read about the genocide. At one point, I felt like I cannot go on denying anymore.” Tayfun also noted that his family doesn't like his ideas. Tayfun and Bedel had met in an interesting way. These two people living outside Turkey today have been trying to pull down the wall between Turks and Kurds with the help of the Turkish-Kurdish dialogue group they formed in Netherlands. As a result of this session, we realized that each people has different clashes that they have to overcome within themselves and that it is not as easy as we expected. And there are still a lot step that should be taken in order to achieve this...

Caux Palace: once a hotel, now a conference center

The conference in which I had also participated was held in Caux Palace. Built in 1900-1902, it was the largest and the most luxurious hotel in Switzerland at that time. Facing Alps and Lake Geneva, the hotel went through a crisis because of World War I. At the beginning of World War II, the hotel was closed down. In 1944, Swiss government reopened the hotel for keeping the prisoners of war fleeing from Italy there. On December, it hosted Jewish refuges from Hungary.

A group of people, who believe that reconciliation in the shattered Europe will be achieved through dialogue, was searching for a place where they can organize conferences that gathers divided peoples together. During their search, Caux Palace was put up fore sale and they bought it with the donations of more than 100 people. After that, hundreds of volunteers renovated the interiors of the palace.

Opened in 1946, the conference center maintains its tradition of volunteering. The first reconciliation events in Caux was held in 1946-1950 between French and German people. In the later years, it became a meeting point for African leaders and the representatives of former colonialist countries. As time passed by, India, Japan, the US, Lebanon, Cambodia, Somalia and South Africa became a part of Caux. Delegation from South Tyrol visited the palace. In the recent years, countries like Iraq, Syria, Palestine and Israel became the countries in search for dialogue in Caux; Armenia and Turkey are also a part of this search. In conferences held in Caux every year, hundreds of people share their stories. Speaking about the figures, in 2015, 1421 people attended the conferences, 55% of them being women.