Croatian Goran Blažević began a journey for drawing attention to the problems of the refugees. In this 5-month journey from Jordan to his homeland, Blažević follows the route that refugees use for going to Europe. Blažević is in Turkey in these days.

A recent research by Thomsan Reuters Foundation reveals the extent of the refugee crisis in the world with striking data. According to this research, by the end of 2015, 65 million people are forcibly displaced and 21 million of them had to go to other countries as refugees. UN estimates that 1,200,000 people will be displaced within the next year. While about 370,000 migrants managed to go to Europe by sea, 5,000 migrants died in this journey. About 173,000 migrants went to Europe via Greece, but about 75,000 migrants are stuck in Balkan countries. Migrants, who got stuck because Balkan countries like Hungary closed their borders, are waiting in darkness as the winter comes.

Goran Blažević lives Croatia, one of the Balkan countries which closed their borders. About 2 months ago, this 33-years-old young man living in city of Umag on the northeast of the country began a silent walk of solidarity with refugees who try to come to Europe. Blažević spends half of his time for earning money to afford traveling and the other half for traveling on foot. He says that his country's attitude toward the refugees initiated his idea of walk of solidarity: “In 2015, Croatian government welcomed the refugees. They built camps and carried out works for meeting their needs. However, in 2016, this attitude changed with the change of government. They started to stop the refugees on the border. I wanted to visit the camps and volunteers in my country, but it was impossible. Then, I realized that there are racial attitudes and fear in terms of the refugee problem in Croatia and other European countries.” As a result of this realization, Blažević decided to follow the route that refugees from Middle East use to go to Europe. His first destination was Petra, 2500-years-old ancient city in Jordan. I asked why he has chosen Jordan as the starting point of his walk of solidarity that he calls 4 km/h and he said that it was because Jordan is the country that hosts the largest number of refugees in the world. Another reason for this choice is the fact that the majority of Jordan's population is Muslim. He says that he also wanted to experience how “Muslim refugee” image is in reality, since it was intentionally misrepresented by European media. 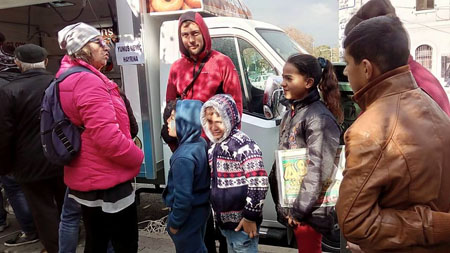 He planned to head to Turkey and Balkan countries afterwards, but he had to change the route after Balkan countries started to close their borders one after the other: “I was planning to go to Greece, Macedonia, Serbia and Hungary after Turkey. However, it seems that I will go to Albania after Macedonia, since the borders are closed to refugees in those countries. They also use the route across Albania.”

Blažević is in Turkey now. He plans to go to Greece through Antalya, Denizli, Selçuk, Izmir and Çanakkale and finally reach to his homeland Umag on March 2017. I asked about his experience in Turkey and whether he was able to contact to refugees. He speaks like a tourist who just had the initial impressions about Turkey: “People are helpful and nice. The view along Aegean cost is wonderful.” Walking around in İzmir in these days, Blažević says that he met a migrant family on the street, which was his first encounter with Syrian migrants in Turkey. However, they could not have spoken very much, since they don't speak the same languages. Blažević may not have some great goals, but we cannot say that his effort is unimportant, since he does something which European countries and majority of the societies in which refugees live are not doing: he tries to empathize with refugees through experiencing the same route.