The Pope was joined during prayer by President of Armenia, Serzh Sargsyan; the head of the Armenian Apostolic Church, the Catholicos of All Armenians, Karekin II; and Catholicos of the Holy See of Cilicia, Aram I.

In his speech at the beginning of mass, the Pope said, “The first genocide of the 20th century struck the Armenian people”.

Stating that in the past century humanity had lived through three massive and unprecedented tragedies, the Pope added, “The first, which is widely considered the first genocide of the 20th century, struck your own Armenian people”.

The Pope also referred to crimes against humanity committed by Nazism and Stalinism, and the genocides that took place in Cambodia, Rwanda, Burundi and Bosnia. 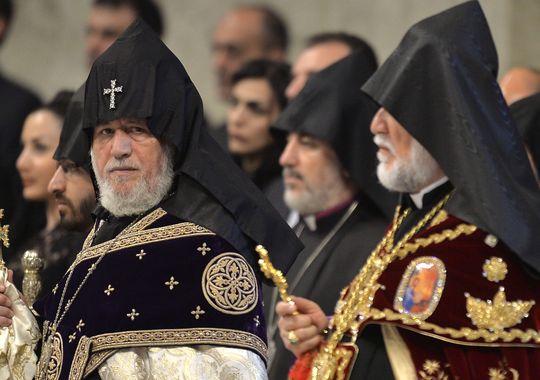 The Pope went on to state that it was his duty to honour the memory of the victims, adding, “Concealing or denying evil is like allowing a wound to keep bleeding without bandaging it”.

During mass, the Pope declared Surp Krikor Naregatsi (Saint Gregory of Narek), a 10th century monk, a “doctor of the church”. According to the report of AP, this title of the Catholic Church has so far been given only to 35 religious figures.