The discrimination that Stephan Yepremyan has been subjected for trying to maintain his culture and the torments that Hangül Özbey went through because of her Kurdish and Armenian identity reveal the suffering caused by being an Armenian of Diyarbakir.

With the restoration of Surp Giragos Church in Diyarbakir, the Armenian population in the city was revived. Being forced to conceal their identities for years, Armenian locals of Diyarbakir had the opportunity to come together, maintain their culture and perform their religious rituals. Because of the clashes in Sur province of Diyarbakir, destruction of Sur and Surp Giragos' being out of reach, Armenians of Diyarbakir once again “retired into their shells like turtles”, as they put it.

The discrimination that Stephan Yepremyan has been subjected for trying to maintain his culture and the torments that Hangül Özbey went through because of her Kurdish and Armenian identities reveal the suffering caused by being Armenian of Diyarbakir. I just want to let them speak for themselves.

Stephan Yepremyan begins to tell about his story: “My family is from Adıyaman. They still live there. My father is Armenian and my mother is Syriac. I was born in Kahta as the youngest child of a family with 7 children.

“I came to Diyarbakir after I completed my secondary education and I still live here. I am a mechanical engineer. I knew that I am Armenian all my life. Like any other Armenian, I didn't have the chance not to know it. Even in elementary school, people keep reminding you who you are.”

“I have always been isolated”

For years, Stephan Yepremyan has been living in Diyarbakir that he loves so much. He says that preserving Armenian identity and living as Armenian is a kind of struggle: “For me, living like a human is more important than living like Armenian or Christian. However, being isolated or insulted because of being Armenian is of vital importance. My humble struggle has always been about this. I don't know why we came to call it a struggle. Why would you call living like yourself a struggle? I have never considered identity or belief as a tool; I have never promoted it, but made it visible. And I will keep doing it. I have always been isolated because I chose to do it. There were times even my relatives or Islamized friends felt ashamed of me. They pushed me away, wrote me off their lives, unfriended me on social media.”

“It wouldn't be counted as good deed, if he is Armenian”

Defining his experiences of isolation as “funny”, Yepremyan tells about some anecdotes from his life: “Actually, we don't know each other, though we are living together. I don't know what to call it; it might be called unrecognition, hatred or ignorance. Regardless of what you call it, this fact sometimes leads to funny situations without bad intentions. For instance, an intern from the office went to his village and brought some food that his grandmother had cooked. I thanked him and his grandmother and he said: “There is a problem, brother. It turned out that we cannot do a good deed for you. I told my grandmother that I will give the foods to an Armenian and she said, 'I wouldn't be counted as good deed, if he is Armenian, but give them anyway. Let God decide, maybe he will accept it.'”

And one day, a friend visited me at home. He said to my mother, 'This son of yours is so indifferent. He never inquires after us and visit us at home. How come you never call someone you see as a brother, you cruel, giaour man?” 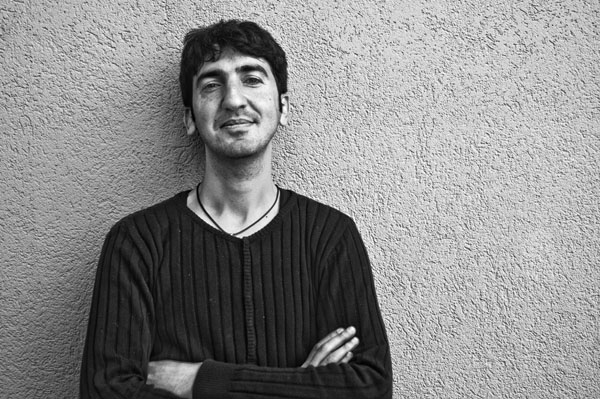 “I owe to my mother”

“Even in elementary school, I heard the word 'giaour' many times,” says Yepremyan. “They called me giaour in school, because I didn't fast. That evening, I asked my father what it means. I guess, that was when I started to think about identity. Even if you don't know who you are, people would remind it. They even keep questioning the ones who are converted to Islam. I have relatives who are very devoted Muslims. There were some people who don't perform namaz with them; they were saying, “What good could come from namaz that this giaour makes us perform?” Putting aside the ones who converted to Islam voluntarily, they even call the ones whom they forced to convert to Islam giaour. This is how I learned to refuse anything imposed on me. I mean, I became myself. I owe it to my family, especially to my mother. They managed to preserve their life style and traditions and they chose to transfer the past instead of erasing it.”

Saying that he wants people to accept him as he is, Yepremyan talks about his feelings: “Every insult I have heard so far came with 'Armenian'. Some people even say, 'So what? Better insulted than dead.' When they see that you wear a cross, they say, 'No need for such things. We are all brothers and sisters. Just hide it.' That is exactly the problem: if I hide it, if I live the way they see me, if I talk and pray like them, then we would be the same. I don't need them to call me brother; what is important is to call me brother after you accept me as I am.”

Preserving Armenian culture with his songs, Yepremyan wrote a song for Surp Giragos. Stating that Surp Giragos has a significant role in his life, Yepremyan says that Armenians of Diyarbakir grew apart because it is forbidden to enter the church: “We are unable to contact each other.” He says that he couldn't have entered the region called “Giaour neighborhood”, where Surp Giragos is located, for 8 months. He says that it is agonizing to see the current situation of the neighborhood.

Hangül Özbey's story is similar to the stories of many people who found out their Armenian identity later. She was born in Silvan to a family with 8 children. “When I was a child, I didn't know that my father's mother is Armenian. I was defining myself as Kurdish. My grandmother told us that she is Armenian in '80s. My grandfather is Kurdish. My grandmother was one of those Armenians who were forced to convert to Islam.” Özbey lives in Diyarbakir since 1997.

She introduces herself as Hangül. It is the second name of her grandmother's aunt Vartanuş. “I took my name after my grandmother's aunt. Her name was Vartanuş, but then they started to call her Hangül. They did it because they were afraid that soldiers might kill her. Vartanuş's husband was killed by aghas during the genocide. It was a time when people were encouraged to kill Armenians by making them believe that a person who kills 7 Armenians will go to heaven. Vartanuş was left alone with her 2 children and became Hangül. Since she was so beautiful and had lots of gold, everybody wanted to have her. Refusing the marriage proposal for a long time, Hangül finally decided to marry with a man who would accept her children as well. When a man accepted it, she jumped from the bridge over River Murat with her children and golds. The other aunt of my grandmother went blind, because she cried so much during the genocide. She was the one who wanted me to have this name. My grandmother used to tell me, 'If you have a daughter, name her Vartanuş.'”

“We found out who we are by researching”

Saying that people in Silvan don't isolate her because she is Armenian, Hangül says: “There were many Armenians living in Silvan in the past. Everybody knows it. There is a church and many people who were saved by locals during the genocide. We didn't have the chance to know the Armenian culture. We learned about it by researching and started to get to know ourselves. We had always defined ourselves as Kurdish. This may be the reason why we want to establish stronger ties between peoples. Being Armenian and Kurd at the same time gave us an internationalist perspective.”

Hangül says that they were subjected to serious violence in Silvan during '90s: “During '90s, we were subjected to violence by the groups organized in guise of religion. When I was in high school, I was attacked with sticks and guns. I was in coma for 13 days. Then, my family moved to Adana, where I was detained just because I am Kurdish. I was tortured. I was so injured that I still suffer. After a police officer said that I am Armenian, they started torturing me even more heavily. Then, my family moved to Antalya for financial reasons. I couldn't find a job there. During the interviews, they were asking where I am from after they heard my accent. I escaped from lynching attempts for several times. Once, I was working as a nurse in a neighborhood where the funeral of a solider died in Şırnak was held and people shouted 'Here is a Kurd' as I walked by. They tried to attack me, but then a few people intervened and said, 'She gave an injection to us. She is nice.' That was what saved me.”

Living in Diyarbakir, Hangül says that oppression started again and it is even worse than '90s: “Lately, we have been living under serious oppression. For instance, when a police vehicle is raked, they break in a house randomly to search for weapons or guerrillas. Something like this happened to us in August. One day, around midnight, our house was raided. 14 special operation officers with masks tried to enter the house by breaking the door down. When we opened the door, they pointed guns at us, made us lie on the ground face-down and told us not to move. They said that they are searching for terrorists. You feel like they would kill you right there, if you move. They searched through the house for about an hour. I cannot even tell how I felt. It is even worse than '90s.”

“They took away our right”

Saying that Surp Giragos Church is a place where Armenians live their culture, Hangül Özbey says that this right is taken away from them: “With the restoration of Surp Giragos, the people who are the same but grew apart had the chance to come together again. I was really enjoying our gatherings. 2 years ago, a great mass was held in Surp Giragos with participation of Aram Ateşyan. It was a whole new experience. I felt like we will live peacefully together in this land once again. During the so-called peace negotiations, people were feeling hopeful. I know many Armenians who were afraid to tell that they are Armenian; they also started to talk about their identity.”

Hangül also talks about her testimony to the recent events and her deep sorrow: “Curfew was imposed after clashes started in Sur. I hadn't been going to Surp Giragos for a long time. I tried to go there once or twice, but there were walls around it. Surp Giragos was Armenians' place for gathering, performing their religious rituals and maintaining their culture. Now, we cannot get close to the church. We are not able to come together anymore. It is not easy to contact those people. Especially the ones who moved from the neighborhood are having difficulties. They took away our tradition to learn and teach Armenian and right to know each other and ourselves.”