After the shelling of Aleppo that almost destroyed the entire Old City, our friend Vahakn Keşişyan who is an Aleppine himself, poured his heart out: 'When I saw the photos of the Al Jabri Square after the bombings, and especially the Al Siyahi Hotel photos, I knew that only my memories remained.'

This is how the Metallica song goes. This is how Bared, the famous antihero of Ants of the Sunset admires.. 'you will lose everything... only your memories will remain, they will tear you down'. When I saw the photos of the Al Jabri Square after the bombings, and especially the Al Siyahi Hotel (Tourist Hotel) photos, I knew that only my memories remained. 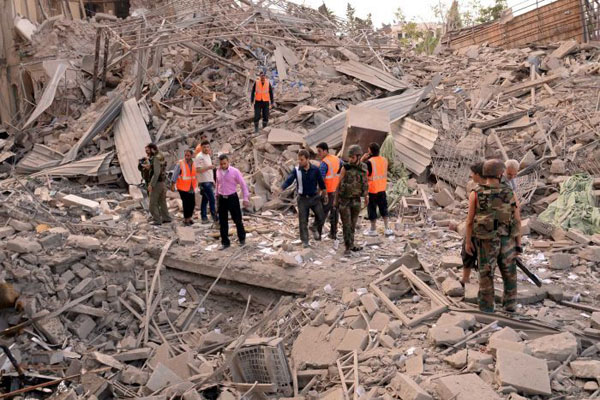 The fear of losing everything should be the worst. How can someone lose everything? How can someone or a group of people suddenly wake up and see that they have nothing but their memories? It might have been their fault, that they were not prepared, or someone else's fault, that they didn't know about, but the ultimate untouchable fact is that they have nothing now. And having nothing is not only about gold, jewelry or bank accounts; it's also about not having cloths and not having shelter. Not having school to go, not having a place to pray, not having a market to shop and not having a cafe to have a cup of tea. Today, once again we are face-to-face with an imposed reality, which puts us in the conditions of exile. And where? in a place that we have considered to be our new home, the most secure among the ones that we had! Once again we are on the verge of adding a new layer of memory on our skins.

Is this Stalingrad? I don't know, but I pity Aleppo, and Aleppines. I pity the kids who interrupted their already busted classes and left to their not-so-secure homes after fragments reached their school that is at least a kilometer away from the bombing site. But now, I cannot stop thinking about my two friends with whom I walked the way from the same school to the same square for years. I considered those streets the safest in the world, I even complained that nothing happens in our streets; we complained that our city was stagnant. Well, we didn't know that the alternative was the total destruction, the ash, the dust and the rubble.

I want to understand one thing. Whose responsibility is this? The Baath regime and Dr. Bashar al Assad's, and his father's? Who built this system that was too rigid and too authoritarian that there is no alternative to topple it except by ruining everything -and I mean it- EVERYTHING? Or those who are using the opportunity of a weak Syria to control it by terror, killing, kidnapping and gangstering?  Either way I am losing everything, and my memories are turning to nightmares. I hate seeing Aleppo hashtags mushrooming all over the web by hundreds per second... I hate it because Aleppo is gone forever. To be honest, for most of the time I did not like Aleppo. With my friends we bragged about how bad a city Aleppo was, and believe it, most of these who had left the city they usually had this hidden shame that they once belonged to the city... but now? I don't know... I liked the old city... I don't know how orientalist a statement this is, but I also liked the Al Jabri Sqare, I liked the new busses, they gave me on Syria's future, I also liked buying the Abwad wa Aswad weekly (White and Black) and the Watan Daily, these too gave me hope, they were at least somehow different.

Hope... What a sentimental word in these days! What is it good for? Does it feed you? Does it shelter you? Does it protect you? Does it shoot for you? Hope for what now? For another exile? A new home? Maybe a Greencard... a suburban four wheel car? First a refugee status in a Scandinavian country then United States of America? Hope! Funny.

One thing is clear. Those who leave, will leave without a penny.. they came a hundred years ago barefooted, and will leave now barefooted. A heavy statement? Well, ask those who are getting sugar aid packages, or... Trying to get one. And those who are not leaving will leave after the rubble is cleaned and the ash swept. It was such a century! First camps, building a community, building a church, the first one, then the first school, first street, then the 30's came to replace the camps with buildings, 40's Aleppo is the center of Armenian new diaspora, some hard years during the 50's, (but not like these...), prosperous 60's and 70's, the stable 80's and 90's, and the golden years of 21st century, with new churches being built and new schools opened.. Then comes the second decade, with all its terror. Here you go... The history of a community in rough 4-5 lines. What now? What next? What hell is waiting us? 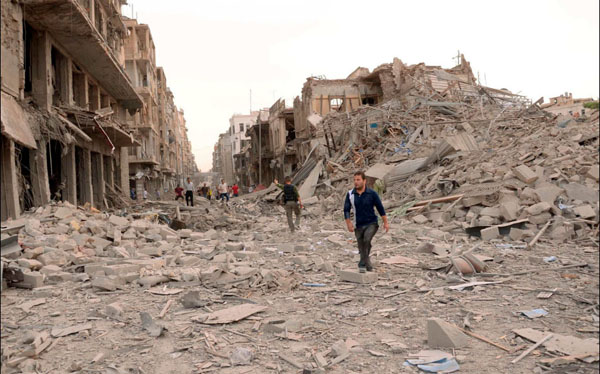 People ask me around did the Armenians start moving out? Did they take their gold and silver with them? What a question, I admire... YES THEY DID... And those who could not take it, buried it somewhere under a marked stone and a tree so that after 100 years when they come back, they take it back... but the thing is, and the biggest problem, is that they did not take their schools with them, neither their homes, nor their streets... these will be left in the city forever.. I mean, as long as the city stands.

Finally, this over emotional writing should come to an end. Aleppo streets were ugly, its buildings were dirty, its parks were abandoned and its heritage overseen. Its people were not nice to each other, its youth was bored, its elderly forgotten, its men over masculine, its women marginalized, its children abused, its personnel corrupted and its schools lacked quality… Of course I prefer an Aleppo with beautiful streets, clean buildings, people in the parks, heritage celebrated, people nice to each other, dynamic youth, respected elderly, equality between men and women, children under attention, high quality schools, responsible personnel… DEMOCRACY… Will it ever come? Will it ever?